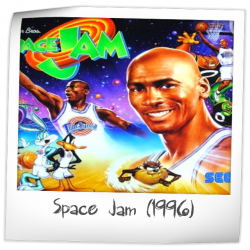 There are 27 ratings (that include a comment) on this game.
Currently showing results page 1 of 2.

This could have been a really cool pin with the MJ theme. After a while I found it very mundane with limited shots and all the ramp returns.
7.293/10
1 year ago
MEL

Space jam has a nice playout and good shots, lots of flow here!
The use of magnets is very well done.
The rules are not deep but super shallow.
6.906/10
2 years ago
WXW

Oh, Space Jam. It's a fantastic kids' game, and not a bad basketball theme, with Looney Tunes and Michael Jordan it's hard to go wrong. As with most Segas of the era, it's both a pretty simple rules set (with an easy 'wizard' mode) and a bit of a flying ball / maintenance headache, particularly in that it's hard to find some parts (my basketball is just hopelessly shattered).

But they also did a really good job with the Looney Tunes characters, with the "actual" animated character voices, and it reflects the goofy movie theme really nicely. You have a sequence of modes that correspond roughly to the story arc of the movie. And I really dig the signature toy -- the "jump" ball kicker that can go two different ways.

This isn't a good single machine for a collection, but it may be one of the cheapest really good simple DMDs you can find, and if it's in better than player's shape so much the better.
2.310/10
2 years ago
XQZ

Just looking at the machine looks like it should be a pretty fun game to play. Stepping up to it is a different story. Maybe the game was intended for little kids and so they kept it real real simple, or maybe that is simply the mode it has been set to every time i've encountered it in the wiild. Three or more games in a row on this feels excruciating. Unless you're a hardcore fan of the theme I see no redeeming quality. although it's still better than ro-go

I played this yesterday. The shots in SJ are similar to SEGA’s STAR WARS machine. Annoying and boring. If you start one mode, you need to complete it or lose the ball before you can start another mode. Annoying. The animation on dot matrix screen are so-so. Tweety Bird looks awful is one example. The Road Runner bit is cool for a quick second. I love Daffy, Bugs, Porky, and Tweety but didn’t care for the film or this pinball machine.

I have both this and Stern NBA, and for some reason this just shoots and feels more fun. Space Jam was one of my favourite films growing up so it has a great nostalgic quality to it for me. the basketball magnet shot is pretty neat and will impress guests.

pinheadaustralia has owned this game in the past.

Not a bad Sega title with a sports theme. I'm generally not a fan of the sports theme, but this one teeters that line. It's a fun play, with a couple of odd shots that are satisfying when you hit them. One major downside is that many of the shots are set up to put the plastics at high risk of damage, and now that parts are scarce, it's a pretty rough game with the balls flying everywhere to make those baskets.

Wow severely underrated game. The ppl that have it a 3 must of never played the game or played a really beat up example of it. It is a pretty fun game and it's got MJ and Bugs Bunny

kids love Space Jam, as it has Bugs Bunny and Elmer Fudd and Yosemite Sam on it, and you get the try to shoot basketball hoops. not as good as scoring goals on WCS, but quite satisfying.

i've played on a lovely example of one and really enjoyed it. unfortunately the first one i picked up was a bit of a beaten up wreck, which kind of takes away from the enjoyment. also i hated the shape of the backbox - that stupid rounded shape like on SST or (shudder) XFiles, which just means the damn thing won't fold together properly. so I bought a second one to play, swapped across any better plastics or targets, then the good one was played and sold on while the busted up one (with unobtainium parts stolen off it and playfield saucers filled in) had the valuable boards etc rescued then was attacked, filled with fireworks, set on fire, run over with a dumper truck, and uploaded on youtube as a smoking wreck: the idea was to wind up and infuriate the pinsiders with no sense of perspective, and it worked a treat! some people thought it was a travesty to wreck a machine, but FFS it was a junked and unrescuable Space Jam, not a fixable game.

SJ is not as bad as people make it out to be, but it's no A lister. more of a D-lister, but a DMD one. oh, and it has a huge Michael Jordan head on the backglass, and i don't even like basketball.

cooldan edited previous rating on November 22, 2017.
cooldan has owned this game in the past.

Great game for the kids. Also gets a lot of play when family/friends are over. Still need to tweek mine, so the rating may change over the next few months. Shots are good, basket and jump ball make good use of magnets. Originally thought the Space Jam modular targets were in odd spots, but are fairly easy to hit, same with the drops. My main complaints would be with the light show and some of the art, mainly the cab art. Decent game that has a bad rap, try one and you may like it.

MJ MJ that's all this game is: bugs bunnys annoying voice yeliing MJ at you. the games fatal flaws are the skill shot (repetitive and way too easy), and the toy backboard. which never seems to catch the ball. toss in some bland ass graphics and ear drilling call outs and thats space jam. the basketball lock shot is chill, locks are clearly indicated and the shot is fun and easy to hit with a backhand or forehand.

This pinball seemed "clunky" and rough. Just wasn't smooth at all. I don't know if all SEGA pinballs are like this but if so they can have them.

cscott1919 has owned this game in the past.

Space Jam is one of those pinball games that looks great when you step up to it.

The Pros:
Anything Looney Tunes has got my attention. The best thing Saturday morning growing up was watching these short films. The best! The jump shot target is great and the ramps flow well. A solid layout with hard to hit standups and drops make for lots to shoot at.

The Cons:
This game is all about Michael Jordan. I can almost hear Mel Blanc speaking through the game "Over here, MJ... Over here!" Ugh. That saucer in the center of the PF sure does gits ripped to shreds. The skill shot is a complete gimme. Flippers must be strong for all shots to be made (imagine that...), otherwise this game falls flat.

The Takeaway:
Another solid (albiet fan) layout defiled by half-thought out rulesets. This of course leads me to ask the question:: "Did Sega test their games on location?" I mean... were these game rules thought out? Carrying a title by its theme is one thing, but that seems an awful lot of work to come up with a game that is short on playability. We will see how I feel about this game when I get my hands on a copy in better condition.
7.197/10
9 years ago
DCT

A few people's comments are short changing this machine. Under rated game in my opinion that's good fun and well laid out. The only knock is it is a little easy but it's still a good challenge to complete all the planets. If your not an NBA or Jordan fan you may be a bit put off by the graphics too.

pinmanguy edited previous rating on March 01, 2013.
pinmanguy has owned this game in the past.

Space Jam is my personal least favorite pin of all time. I've never played any game that left me more disappointed in my entire life.

I've owned this machine for about 2 months now and my kids and I play it all the time. I think it's a really underrated machine, and it's a great machine to get your little ones interested in pinball. The only real minus for me is that I like backglasses that have flashing lights, and this one just has the flourescent bulb. Other than that, it's fast, has nice animations on the DMD, great sounds, a video mode game, and it's tons of fun. It's really a steal for the price.

The magna hoop is a great and addicting shot!! I just restored my space jam, with some leds and looks awesome. This pinball cabinet and backglass is perfect for any game room and the game is for all family.

for sega, this is a fun machine. mj and the looney tunes, how can you not have fun? only downside, when in mode, you can't start other modes. only hit and lock multi balls....uggg. updated rating, had to lower it in the larger schemes of better pins.

Ballsofsteel edited previous rating on June 15, 2014.
Ballsofsteel has owned this game in the past.

First pinball to own and it's not a bad game. Need to see how it fares a couple of weeks/months down the line. Interesting that the Stern NBA game takes it's styling from this one though - must be something there.

Update - I have completely stripped the machine - replaced worn parts, rubbers, plastics and the game now plays like a dream and looks incredible. It's a fun game. Final Jam wizard mode is five ball mayhem - awesome.

teachp8 edited previous rating on April 25, 2011.
teachp8 has owned this game in the past.

Next12
There are 27 ratings (that include a comment) on this game. Currently showing results page 1 of 2.