Any Board Game players out there?

You're currently viewing posts by Pinsider A-1Bogart.
Click here to go back to viewing the entire thread.

Late to discovering this thread.... reconnected with a friend over a game table recently with everything being shut down. We've enjoyed a few games of Mansions of Madness 2nd ed, although not in love with the horror theme. We really enjoy the exploration , searching, expand as you go board. The puzzle solving and app integration are nice touches too. Looking for a similar type co op game, just without the Lovecraft tie-in...

We grew up on Hero Quest and still share very fond memories of those days (I even wrote 2 full campaigns back in the day in addition to playing all the expansions). I was looking at Gloomhaven but it seemed....intense. Thanks for those who have mentioned the lite version - never heard of it before and may have to check that out. Any other suggestions?

I just kind of got back into tabletop gaming late last year. Nothing super new yet but picked up and have been LOVING Robinson Crusoe. Makes a difference with the upgraded tokens and food that looks like food.

Are you playing it solo?

Playing mostly solo, usually using 2 characters / Friday. I felt the true solo was a bit too easy - having to balance the morale makes the game much more challenging. I've also really enjoyed using Melodice for some thematic background music.

I have played a few times with friends also and found it really enjoyable. As they were new to the game I focused on managing the rules and telling the story, then just letting them make all the decisions and enjoy the story. We had a really good time each time, even the time we all died horrifically at the same time due to violent wind gusts during a 5 cloud storm....Haha!!!

I've had Robinson Crusoe on my list for a while as a solo game. I like the idea of it, but I'm afraid it might suffer the same fate as Mage Knight... which is for sale if anyone is interested.

How is Mage Knight? (Probably a silly question to ask since you're selling it....)

I was looking at that as a possible solo game, but the idea of a solo board game campaign, managing all components, and the length of the games seems a bit daunting. What do you not like about it?

When I was playing Nemo it was like that. Just kicking back and listening to the TV or even chatting with people playing pool or pinball. Every now and then somebody would look at what you're doing and talk about it. It was exactly like putting a puzzle together.

Funny, that's exactly how I explained it to my girl when she saw me playing solo Crusoe - like trying to unlock puzzle (and not die from starvation). I'll have to check out Nemo's War and some of those others mentioned too. Fortunately I've started to get a small group willing to start getting back together safely, as I'm sure we'd all prefer to do. But I have found that I enjoy these solo runs on a random weeknight instead of just mindlessly looking at the TV. Oh yeah, I guess I could always play pinball too...

Deaconblooze Definitely check out RC. Once you get the rhythm of it down it's not terrible to play as every rule makes sense thematically. It is a HARD game to win though, as mentioned. I guess surviving on a cursed island should be.

--Top link with the light blue box and the picture of the beach is the base game. I played like 3 games and I was all in.
--Mystery tales is an expansion with like 8 new scenarios and a horror mode. 5 of them are a campaign I guess - I have it but haven't opened it yet.
--The Treasure Chest is a bunch of extra scenarios, 2 new playable characters, a few new helpers and cards of all types to mix up the game. I bought that too and have interspersed some of the components into the game. Most of the little $4 upgrades you see on different sites are in the treasure chest.

Lastly, I spent a little extra at Top Shelf Gamer and BGG to get the upgraded food and tokens.
https://www.topshelfgamer.com/collections/robinson-crusoe-adventure-on-the-cursed-island
https://boardgamegeekstore.com/search?q=Robinson+Crusoe

I'm a fan of this video game, and the developer (just 1 guy) is as good as it gets. I'll be grabbing a copy of this
https://www.stardewvalley.net/stardew-valley-the-board-game-available-now/

I never played the video game, but this looks pretty cool. Thanks for mentioning it!

Glad it's not just me with the rash of buying! I've ended up here after just a couple months, with a few not even pictured. Even though we're playing once a week I feel like we're rushing through some of them. But when I legit watched 15+ hours of KDM videos over the last few days and seriously considered dropping on a $400 board game that no one I know would play with me it was time for a reality check!

At the risk of tempting you guys with one, though, we have had a blast with Camel Up. It's very light and completely silly (betting on camels racing around a pyramid) but man have we had some fun with it, especially with a bit bigger group. Its also not that expensive, which helps. Played again last night with 7, kids and adults, and just about everyone was cheering and laughing the whole time. Named every camel and even have been keeping stats on how many races the camels have won. We've definitely had some good times with it - not even too much liquor required. 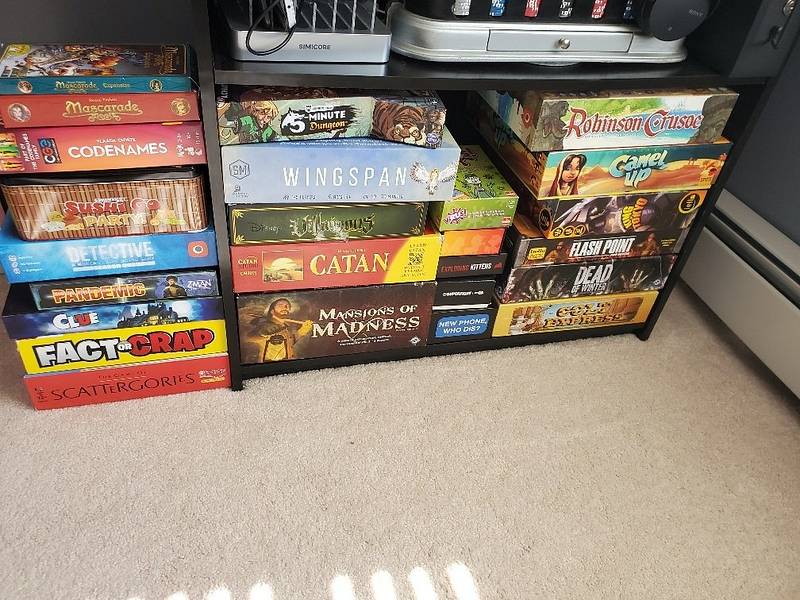 Based upon your suggestion, we bought Camel Up. We had a BLAST! So much fun. Just the type of game sometimes you crave - light, fun, fast with a little bit of luck thrown in.
Thanks!

Not my work, but sharing something I saw on BGG - cool intersection of pinball and board games. I'm so impressed by some people's ingenuity and handiwork when I see projects like this..

Have you tried this out solo? I saw the Watch It Played on YouTube but havent found a ton of reviews. The idea of a hidden competing destiny for each player sounds intriguing, the app integration looks pretty solid, and I like the idea of the evolving skills grid but Id probably end having to do a fair bit of solo time on this one.

Looking to finish my basement off and squeezing in the 48x48 board game table for some 7th Continent and Kingdom Death Monster so I don't have to set up and tear down very often.

Been playing Kingdom Death Monster on Tabletop Simulator recently. I haven't yet talked myself into buying the game because I don't want to have to assemble and paint everything (or pay even more to have someone do it), but oh man is that game good. Also, I'd likely have to play it solo and it seems like a ton to manage if you're solo playing live... Actually, I can't believe I missed out on TTS throughout most of the pandemic. I'd rather play board games in person, of course, but jumping on and having people to play all kinds of games whenever you want is pretty awesome.

In person, though, a friend and I are playing through the Washington Z.C. campaign for Zombicide 2e. It's pretty fun, the different objective cards and the night rules add a lot to the game. I actually did get those minis painted, and it looks pretty good on the table.

Lame33 How did Destinies hold up after playing for awhile?

We played through the main quests of the based game and enjoyed it. Not much replayability unless you are a completionist. The expansion I got with the kickstarter won't have the finished software until Q3 and so that was a disappointment.
Base game is a play it 5 or 6 times and then you wait for expansions or sell it off.
The tiny figures became an annoyance. At times you've got seven too small to distinguish grey bits on the board and not sure which one was which.
However, that was the worst thing and it was a fun game that I thought was worth it.

Cool thanks for the input! I halfheartedly tried to pick it up when it first came out but couldnt get anywhere local. I was going to hold out for the new Descent, but after seeing some gameplay I think Ill give Destinies a shot.

You're currently viewing posts by Pinsider A-1Bogart.
Click here to go back to viewing the entire thread.