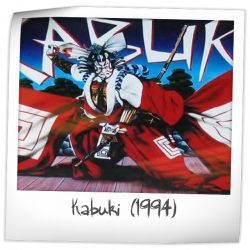 Kabuki is another custom build Data East game, of which only 1 or 2 where made. The game design is based on Data East's "Tommy" from 1994.

There are two stories about this machine:

Orin Day: "Kabuki was never intended to be a production game, and there was no original intention of building a second game. The sound package was basically four or five small sound effects plus a very long sample of some Kabuki music. It was a gift to the chairman of NAMCO who was very ill at the time. Seeing and playing a pinball game with a traditional Japanese theme really helped to lift his spirits..."

Herb Silvers: "According to Joe Kaminkow, they made Kabuki for the president of Namco as a gift for his office. Before Sega took over Data East, Namco was interested. This might have been a gesture to hope to make this a reality. As far as the second one, I have it. I donated money to Joe's favorite charity (No not himself) and got the blank playfield,translight and half the roms. I went ahead and made up a better version of the game. It is still in my shop were it gets played from time to time."