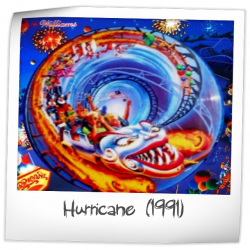 There are 80 ratings (that include a comment) on this game.
Currently showing results page 1 of 4.

Great game for beginners. I love this game, first pinball I've owned. It is polarizing, some hate this game and others love it. There are not that many shots in the game, but the the Hurricane ramp is quite a shot. Advanced players may not find it challenging enough.
5.731/10
4 months ago
???

This game isn't a one-shot game, it's a game that locks you into one shot. It's a combination of the layout, which heavily channels the ball with long ramps, secluded pops, and pressure to fire away instead of attempting cradles, and the rules, which heavily reward looping once you've hit the prerequisites to light the ramps.

The result is a game that has some simple charms(it is satisfying to loop the ball when you're doing well at it) but has a distinct lack of agency. There isn't a reason to change plans if you're making the shot, the shot doesn't change because the ramps channel it so well, and if you aren't making the shot the game usually drains you instantly with very heavy lateral movement, so the game is mostly accuracy focused and doesn't reward wild ball tamers or strategists.

The theme is OK - another carnival - but it's a little biased towards the early 90's trend of cramming in sampled voice clips to fill space, which gets old fast. So overall I prefer the earlier games of this series, both aesthetically and otherwise.
4.879/10
5 months ago
BKD

I think the layout is fine. It’s not my favorite, but it’s fine. I don’t like the ferris wheels at all, but the right ramp is awesome. I love hitting that shot. I dislike the theme, and the artwork, and it has a fairly shallow ruleset, so it’s not really my kind of game.
4.807/10
6 months ago
???

Ok entry level DMD pinball. Would appeal to children under 10. Just too repetitive and too easy. If you can pick one up for $2500 or so...do it if your please...I have owned this title twice and its just a very entry level DMD. Not a keeper.
8.960/10
9 months ago
ALA

this game is not at this really place in this top 300 ....beautifull machine and back glass , a family pinball to have fun without complicated missions and shoots ...when the playfields is clean , with beautifull leds, under and upper, idem in the back box : you have a fantastic pinball with a terrific look ! a must to have in any collection !
5.586/10
1 year ago
TOM

Having owned all 3 of the"trilogy", Hurricane would be ranked last of the 3. The fun wore off in the first week of having it. Comet and Cyclone were great games for their time. But with the tech that was available when Hurricane was released you would think it could have been a home run.
The big playfield circling ramp is pretty much the big thrill (no pun intended).
Ok in a big collection and if you can get it cheap. And good for the kids, safe theme.

Ceckitti has owned this game in the past.

I recently purchased this machine in a package deal and wasn't expecting much out of it, but it turns out it is really fun with interesting ramps and cool shots. The sound is the weak point of this game in my opinion. The theme is fun, but nothing special. It has some unique toys, but they don't add much to the game play. I would recommend checking this game out if you haven't as I hadn't ever played it and was pleasantly surprised.

tigzzz has owned this game in the past.

Very much a lame duck compared to its predecessor(s). Even Comet plays more enjoyably than Hurricane. They kept true with beautiful artwork and thematics, but the play is very boring. Basically, it is a 3 shot game.

The saving grace is the circus theme and the duo beforehand that draw you to want to play/own the complete set. However, it’s doesn’t live up to the reputation that was established.
8.116/10
1 year ago
KEY

It’s hard to rate this game.
For an experienced player, this game is garbage. It really is. The ramps eat up so much time and they are too easy to hit. Waiting on 2 Ferris Wheels is also time consuming. The juggler again is a time consuming toy as it triggers the backglass wheel.
However, this is one of if not the absolute BEST introduction pin for new players.
It teaches you in a very elementary way what to shoot for and is entertaining to watch the ball go for a ride on all the toys. It would do well in any collection be it in a family home, or an earner on location as it’s both eye catching, and easy to pick up and play for the newbies.
So in short, it’s a gateway drug

Keithisonfire has owned this game in the past.

I love this game,although i have a new iron maiden besides it I prefere the hurricane.Its a good ”family ” game,althougt the playfield is a little to dark somermtimes.This game is a keeper

sedlacek edited previous rating on November 09, 2019.
sedlacek has owned this game in the past.

Pros:
I don’t own one

Cons:
This game has annoying sounds, bad artwork, terrible rules, and shots that are easy and clunky while giving a safe return.

daddyxxx edited previous rating on December 06, 2018.
daddyxxx has owned this game in the past.

I often forget this game even exists, with good reason. This game was designed primarily around theme rather than fun. Just look at where all 4 main shots on the playfield go. Screaming around an orbit? Looped from a smooth ramp back at the flipper? No, it's to time wasting toys and long, squiggly ramps that just don't feel good, and waiting for that stupid backbox animation mystery award. Also, I find it just one of the least appealing playfields to look at period. Maybe it's designed for kids. I'm not 7, thus the low score.
8.012/10
2 years ago
PAT

I think this game is underrated. It is a fun game for the whole family. Rules are not too difficult, music and ambiance make you feel you are in an amusement park. Maybe for good players it's to easy and not enough challenge but to play with friends and family it's a good balanced game. I can't understand why people prefer Cyclone or Comet, the DMD and multiball are a good addition compared to the 2 other machine of the trilogy.

patbou1975 has owned this game in the past.

My favorite game in the “comet” line of games, but I am still not a fan. One of the cheapest Williams DMDs out there but not a game I would own.

This game is pretty fun. Some good gimmicks and the game design is pretty good as well. A very enjoyable pin.
9.376/10
3 years ago
ESH

Ran across this game for the first time this year and it is by far the funnest older pin I have ever played. You get heckled during gameplay. Fantastic and am so glad I was lucky enough to finally discover it. Hurricane 2 thumbs up.
2.753/10
3 years ago
JMA

Not fun at all.

Pinball7 has owned this game in the past.

One of my absolute favorites! Just cant stop play it! Love to see it! Love to hear it! Just bought my second one! :-)

Simple game play yet draws you in like a carnival should.

Snowyetti has owned this game in the past.

I like it, fun and "easy" machine for the family.

Maybe a bit easy if you just bash the ramps for points but otherwise a well done succesor for Cyclone.

And i have to agree: 1700 is not a realistic value in my opinion--> but thats probably auomated math stuff anyway.

A beautiful and great sounding game, that becomes a one shot wonder quickly!!! The only shot you need to make during multiball is the right ramp, which will give you millions of points!! ( of course, you have to shoot the purple drainy targets to light the lock, twice ( one time for each lock).... This game has the shots, but could use new software, like Star wars and Bride of Pinbot!
9.220/10
4 years ago
ATB

I think hurricane gets under loved here because great players find it too easy. But, i, my kids, and most of my friends aren't GREAT players. The theme and artwork are great, the shots are really fun, and the dot's and sound are very good. Hurricane is probably the best bargain in pinball today. Pinside has it worth 1700 or something? I wouldn't part with mine for less than 2100 and I'd still be sorry to see it go. The other 'issue' with this and all games of the era is condition... mine isn't perfect cosmetically but it plays perfect. If flippers are weak or if the ramps or toys aren't dialed in; it just isn't as much fun as it should be. But, when it plays as it should: it's great!

Badamack has this game on the wishlist.

I adore this game! It's a real treat HOWEVER... I did run into some annoying problems with it. Sometimes the ball get's stuck in the juggler among other things, making a mess of my run as I nearly always have to recover the ball from it's stuck position! Sometimes leaving the solenoids to fire kicks it back out, and other times it just won't come out that easily. The artwork by John Youssi and the late Python Anghelo is wonderful and captures the spirit of a carnival nicely. Scoring a train jackpot is sure to make you smile the first time you get one, and so will knocking the dummy off his platform (he mocks you during the game constantly..). Some strong points worth noting about this machine are it's attractive backglass, the playfield and cabinet artwork, it's early DMD display animations, and the fun you will have whilst playing it. Like any machine, it requires setting up to your personal preference (the ball was draining a little too often on standard set-up). I highly recommend playing the Pinball Arcade version of the table on PC/XBOX or whatever system you may have before buying this table as there are equally if not more thrilling tables out there!

Simple pin, but easy and accessible fun for beginers. Nice backglass, but not so nice playfield art.

Next1234
There are 80 ratings (that include a comment) on this game. Currently showing results page 1 of 4.