All models include twelve Iron Maiden songs with players going to battle as Eddie with the help of four flippers, two spinners, a set of 3-bank drop targets, metal and wire form ramps, a captive ball mechanism, a dual up-post lock mechanism, and a center bullseye target. 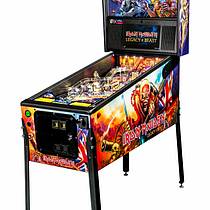