This is a Pre Order for Sterns first 2022 build
In this high energy rock and roll pinball concert experience, pinball and music are fused together. Players are transported back to Led Zeppelin’s early days and tour the world from 1968-1980. As if players were members of the band playing its music, their play updates game features at the start of each verse and chorus of ten iconic Led Zeppelin songs:

Good Times Bad Times
Whole Lotta Love
The Song Remains the Same
Rock and Roll
Trampled Under Foot
Ramble On
Kashmir
Immigrant Song
Black Dog
Communication Breakdown
“There is nothing more energizing and fun than bringing pinball and music together,” said Gary Stern, Chairman and CEO of Stern Pinball, Inc. “Partnering with Led Zeppelin, we created a one-of-a-kind pinball experience. It’s our dream goal to create a pinball machine with this iconic rock band.”
The Pro, Premium, and Limited Edition models all feature a custom-molded Hindenburg Zeppelin toy, based on the iconic imagery from the Led Zeppelin I album. When lit, the Zeppelin toy scores speed locks on the player’s musical journey to Zeppelin multiball. A custom Swan Song Records trademark Icarus sculpted leaper toy takes flight when smashed by the chaotic pinball. A 3-bank of drop targets, 3 custom steel ramps, and 3 flippers keep the pinball action rolling.
The Premium and Limited Edition models feature an innovative interactive Electric Magic™ toy. This device is a unique motorized toy which rises from below the playfield to create different magical pinball experiences. An optical spinner charges the Electric Magic magnet, capturing and making balls disappear. The Electric Magic device also converts into a physical pinball bash toy capable of locking a ball or launching a ball around the playfield.
In true rock concert fashion, the Expression Lighting System™ with 96 intelligent RGB LED’s enables full color spectrum control. Positioned in pockets cut into the cabinet sides to provide color themed full playfield illumination, this integrated playfield lighting system is synchronized to custom light shows specifically designed for every song and dynamically responsive to game events.
As an encore, these models have an additional reversing scoop and metal combo ramp, allowing players to keep the hits coming with constant adrenalized pinball action. A back panel mounted illuminated song status board indicates which Led Zeppelin song is in play.

This is a pre order for Sterns first 2022 build of this game. 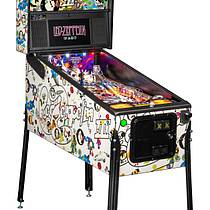 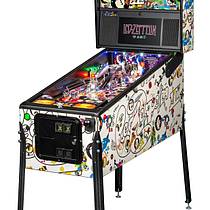 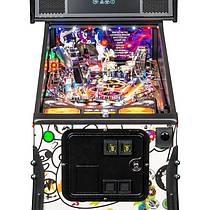 Almost out of stock