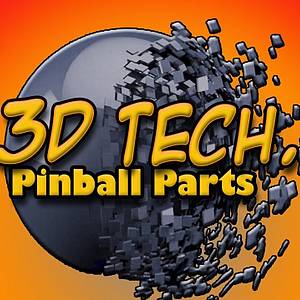 Purpose: To keep the Stern Stationary Target standing straight. Instead of leaning out of position after hit repeatedly by the ball.

Giving Cause: All proceeds will be donated to help the Project Pinball Charity complete their mission.

I was bothered by my Iron-man's Left Whiplash Stationary Target always leaning over and knock the target out of position after getting hit on the sides by the ball. It would lean over so bad that you couldn't backhand the shot from the right flipper. I would side the glass off to adjust the target back to being straight but after only a couple of games, the target would be out of position again. I tried to tighten the target block fasteners which had little effect so I made a simple part to install to fix this problem so I don't have to bother with it anymore.

Then I started looking at my other games that could use Stationary Target Holder on as well. Like Deadpool and X-Men.

On Deadpool, the Wolverine and the Colussus Targets are always get knocked over. Especially the Wolverine Target. It is very critical that this Target stays in position! If it leans over and too far back it rests on the metal ball guide which stops the bounce needed to make that ramp shot!

On X-Men, the Magneto Targets are always getting hit, making these Targets walk and lean over, making the Cyclops and Xavier harder to make! (The Xavier shot is enough already.)

Install Time: 3 minutes. This Stern Stationary Target Holder Mod is quite easy to install. Just unscrew the two target fasteners that hold the target to the underside of the playfield. Remove target's metal "L" bracket by removing the two hex screws, slide the Stern Stationary Target Holder in position, and then re-install fasteners and target to back to its playfield position. Detailed Installation Instructions will be sent with every order. No permanent alterations or damage to any parts or to the playfield.

Known pinball machines that the Stern Stationary Target Holder has been used on:

Iron-Man: All Model even the Vault Editions.
X-Men
Deadpool

Please help me to add to this list by informing me of other games that could use these braces. 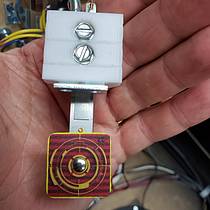 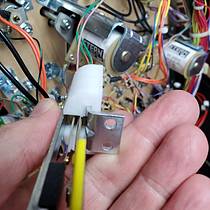 Ships for $ 7.95 Free shipping on orders over $ 80.00 This item does not ship internationally.

This ad is linked to 8 games: