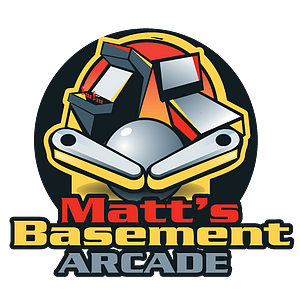 Fixed a problem where the drop difficulty (adjustment
"DROP SEQUENCE NUM." was being used at game start instead
of each player's first ball. This resulted in the adjustment
only working for the very first player up in a multi-player game.

Changed some strings for German games.

Adjustment A.2.22 (MAGIC TOK. ACCEPT) has been modified to
allow the token to be used for "BUY-IN". The "BUY-IN" setting
allows tokens won during a game to be used to extend the
current game.

The audit for matches now properly chalks an audit for
match when the match gives a token.

Added support for more printers through the optional serial port.

Made the factory default for French have the
maximum tokens per player set to 1.

Added the adjustment A.1.14: 'REPLAY AWARD' which allows the
operator to turn off replays.

Attract mode now shows the number of tokens available
in the vault jackpot.

- START BANK LIT - This adjustment determines whether the
bank is lit for a break in at game start.

Implemented adjustment A.1.16 which allows match to award
credits or tokens.**

**NOTE: Tokens paid out by Match are NOT included
in A.2.21: 'TOKEN PAYOUT %'. The match percentage is
governed by adjustment A.1.19: 'MATCH FEATURE'.

When match is set to token in the 'N' version of the
software, the match percentage is fixed at 5%.

Fixed a condition in token multiball which could allow
a player to win more tokens than were available in the
vault jackpot.

Changed logic so that if the token tubes run out or
become jammed in the middle of token multiball, the
player will get points as a substitution.

Changed the minimum allowed value for adjustment A.2.7:
"TIMER STARTS AT" to 15 minutes.

Fixed a problem where under some conditions, the game would
not allow you to change adjustments.

Put in support for new German speech. This requires version 2.3
of the German sound ROMs.

Fixed the screens for the tests of the auxiliary lamps.

When a magic token is set to give the player a credit, the
free-play percentage audit is now chalked when the token
is inserted.

Added an adjustment to make the knob-numbers random during
spins. Some players were able to pick their numbers entirely
too often, which made the odds of success much too high.
Choices are YES (random) and NO (sequential). This adjustment
factory sets to YES (random).

Changed the replay system so that scores accumulated during
Assault on the Vault are not counted in the auto replay
percentaging database.

Fixed message and choreography when a token is won from the
gift lady or '?' game. In version 1.0, these cases would
say "free credit" instead of "free token" , and wouldn't
wait long enough for the token to be released.

Patched a bug in the lamp effect system that would sometimes
cause the game to crash when the assault mode jackpot shot
was hit.

New rule added for 'call guard'. This is now a random
chance of the guard letting you into the board game for
free.

Fixed the coil test for the ramp - it got broken in version
1.0 when the duty cycle was increased.

Removed the "guards moved" from bonus and status.

Filled in the sound test table.

Hid all token adjustments when the tokens are turned off.

Disabled token-input when the tokens are turned off.

Added "number of board games played" audits: these audits
tell how many players played the board game exactly 1,2,3
or 4 times in the same game.

Conditions of the optos at powerup are tested
to help determine if the 12V supply is not working.

Added the continue/quit choices back to the board game.
Defaults: On for GERMANY, off for USA.

Increased the duty cycle of the ramp divertor slightly
to compensate for divertors that were not able to hold the
mechanism in when flash bulbs were firing.

Changed the token spitter process(es) to not log audits
for vended tokens during test mode. During test,
error cases are cleared out, but no feature audits
are chalked.

Added more specific token errors to the user-report for
each particular side - empty and consecutive misses.
Also, made sure not to report token system errors if the
tokens are turned off via the feature adjustment.

Added more robust code to the token releasing code
to help with broken switch(es), and to help the operator
better diagnose what the game thinks is wrong.

Reworked logic when you reach the vault to handle cases where
tokens are allowed but the mech is marked jammed. The
player now will get a REPLAY if permissible, with a magic
credit powerup, if the feature has been enabled.

Changed the sequencing of the REPLAY effect if you win
one as you reach the vault.

The "magic token accept timers" are totally functional.
Both flippers or the start button will speed up the
timer. Credit button presses while the timer is running
will be eaten. Once the last token is inserted, a display
effect of the "credits" flavor is launched to tell the
player that their last token was credited.

Implemented a family mode adjustment. If the adjustment
is set, the cop will not get shot at during the beginning
of assault mode.

The lamp effect for a whole drop bank shot during tnt
multiball no longer uses the wheel lights. This is so
players can see that the mode is adding time.

Left kicker now spots a drop target if an entrance is not lit.

This is an officially licensed replacement part. Please view my shop policies for more information. 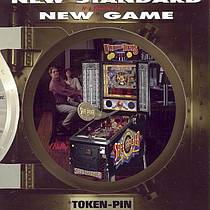 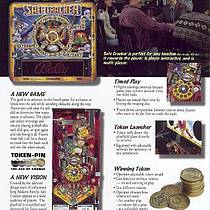