Here is an Allied Leisure Dyn 'O Mite for sale (also written as Dynomite). This is one of the first solid state games ever produced and it preceded any of the electronic games manufactured by Bally, Stern, Williams, and Gottlieb.

Working examples of this game appear to be very rare. Production numbers are unknown. Many, many hours of work went into bringing this game back from the dead.

Surprisingly, this is a fairly fast game to play, and it keeps you on your toes, especially since all the drop targets operate independently of each other, and outlane gates can be opened or closed after hitting certain targets. The flippers are strong and snappy.

I am mainly looking to sell this game in order to thin out the herd, but I'm also open to interesting trades or projects. This game is on the free play floor at the Allentown Pinfest.

All the technical documentation is included--the manual, theory of operation guide, and schematics. Additionally, I wrote up pretty much all the repair info you see on pinwiki, so that supplimentary information is available as well.

A few spare circuit boards and a spare display are included.

This game has been disassembled, cleaned, and shopped. Many problem areas with this game system have also been addressed with the intention of trying to make it as reliable as possible.

The backglass is perfect--no scratches, flaking, or peeling of any kind.

The displays are fully working and all the segments light up properly.

The playfield is in nice condition overall, but has a few minor flaws.

A new pop bumper cap has been installed. The original is included, but is slightly melted from the heat of the bulb.

PETG washers have been installed under all the plastics to help protect them from any potential damage.

The post holes on the two large upper plastics have been enlarged at some point to fit onto the post holes--either at the factory (since the posts haven't moved) or by a previous owner. It isn't really noticeable unless you're looking closely.

New foam pads have been installed behind all the standup targets.

Most of the original electrolytic capacitors have been replaced to ensure reliable game operation.

All the bulbs have been replaced with brand new #44 bulbs. The blinker bulbs are original GE-branded #455 bulbs.

All the coil sleeves have been replaced.

Two bad coils were replaced (outhole kicker coil and one of the chime coils).

The original faulty fuse holders have been replaced with reliable modern holders.

The original flipper bats have been replaced with NOS flipper bats and bushings from a generation 2 game, since generation 1 parts are unavailable. There are cosmetic differences between the Gen 1 and Gen 2 flipper bats, but there is no change in gameplay.

NOS flipper buttons have been installed.

NOS plastic 50 cent coin plates have been installed on the coin door and backed with mylar to prevent scratches on the paint. The original 25 cent plates are included, but have some wear and scratches in them and didn't look quite as nice.

The coin door, chime assembly, and tilt bob assembly have all been fully disassembled and cleaned.

The lockbar has been cleaned, buffed, and waxed, and new beer seal has been applied.

New playfield glass has been installed.

I reproduced the instruction & score cards to be as identical to the originals as possible (I'll make the files available after the show).

There are a few bugs in the game logic that don't work 100%. Namely, sometimes the ball count advances incorrectly under certain conditions. Also, the 5v is a little low (4.7v), so the 5A 5v regulator may need to be replaced (this might be what is causing the logic problems since all the chips test good). I didn't have time to do that before the Allentown show.

Let me know if you're interested, if you just want a peek inside this rare game, or just want to stop by and chat :) 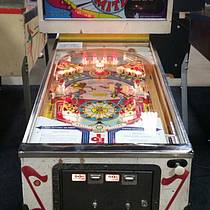 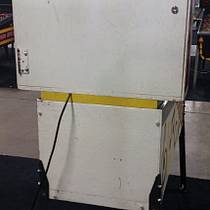 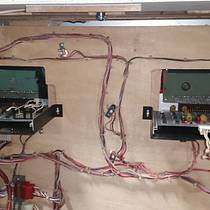 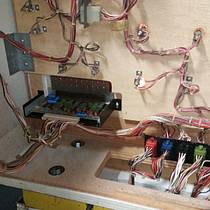 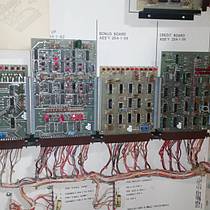 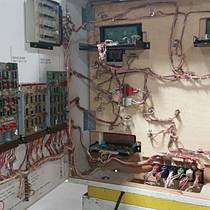 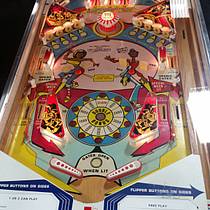 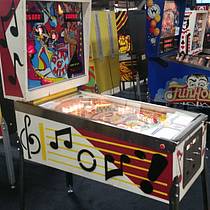 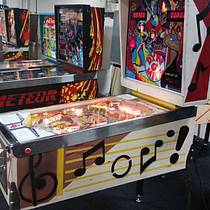 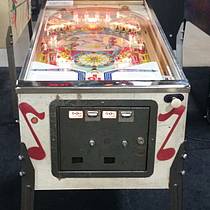 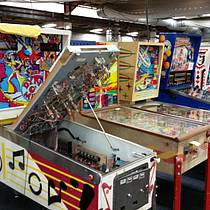 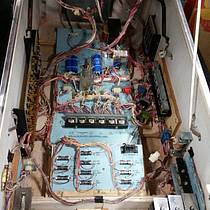 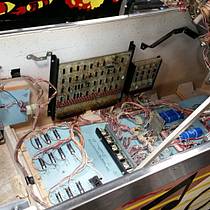 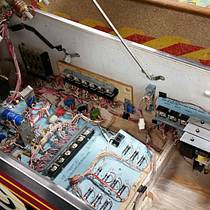 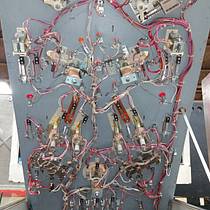 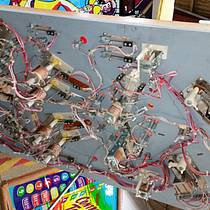 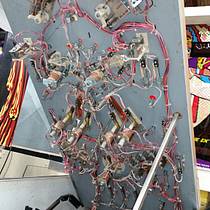 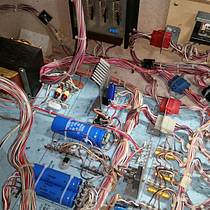 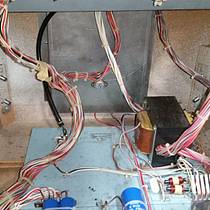 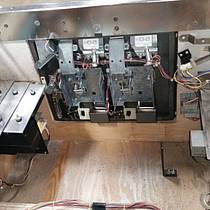