In this high energy rock and roll pinball concert experience, pinball and music are fused together. Players are transported back to Led Zeppelin’s early days and tour the world from [phone number removed] As if players were members of the band playing its music, their play updates game features at the start of each verse and chorus of ten iconic Led Zeppelin songs:

“There is nothing more energizing and fun than bringing pinball and music together,” said Gary Stern, Chairman and CEO of Stern Pinball, Inc. “Partnering with Led Zeppelin, we created a one-of-a-kind pinball experience. It’s our dream goal to create a pinball machine with this iconic rock band.” 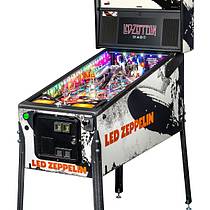