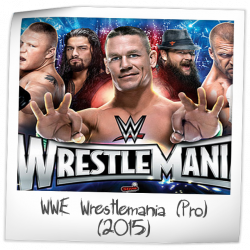 This game ranks 2nd in the game group "WWE Wrestlemania". The group itself ranks #248 in the Pinside Pinball Top 100.

There are 48 ratings (that include a comment) on this game.
Currently showing results page 1 of 2.

And that's kind of my feelings with this game. The animations are good, but not great. The callouts serviceable, but apart from the opening "Welcome to Wrestlemani" they're not memorable.

I hate the rules. I hate games that you have to scroll through a list of abilities. I think that's stupid and takes way too long to get into the game. And when you play against people who can't make up their mind its really grating.

So... I know I've been very negative on this pin. But, I actually really enjoy shooting it. I think its a fun game. I would love it to be rethemed for a classic era. I'd buy that.
I like the ring gimmick at the top. Even though its really a mixture of luck and skill and not all skill based. But, it makes things interesting and fun.

The layout is unique and I think shoots very well. I like the left creature shot. Its a bit tricky to hit, but still I think pretty smooth. JT always made unique layouts and always did a good job with theming the game. Just the theme is a bit of a turd.
But, again I really enjoy shooting this and playing it. Is it a great game. No. Lots of flaws. But, its a fun to shoot game. Would I own one.
No. Because I think this is one ugly, ugly pin.
9.700/10
1 year ago
SAN

VARESQUI has owned this game in the past.

After reading all the negative reviews, I was expecting this game to be pretty bad. However, after finding one on location, I had a chance to try it out for myself. I liked the layout and though the ring playfield was fun. It's too bad the only way to get all the superstar wrestlers is with the LE, because with some small rule tweak I would have considered adding a Pro to my collection.
6.377/10
2 years ago
JNS

I heard a rumor that this game was originally designed to be Hunger games but for licensing or some other reason(s) it was changed to the wrestling theme , cant imagine that the Hunger games theme could have save this games layout though , as others have mentioned odd ball shots & the ball falling down form high to low , I play it when I see it at shows or on location but don't have any desire to ever own one
6.665/10
2 years ago
SJS

I tried out this game and found it to be... underwhelming. While the upper "ring" gimmick is inventive, there is a certain inevitability to what happens. It's not a bad game! It's just that it's not a great game either! I agree with some others that the 'ring" takes up too much of the field for what you get. This is not one that I would choose to play if there were other options.
5.137/10
3 years ago
PEA

I don't like the theme, the layout and the sound. On the pinball that I have tested, the ball dropped often from the wireforms. Disappointed

It's a neat playfield layout but it just doesn't play well. There's a lot of ball rolling around not doing much. There are some weird shots on this one.
2.393/10
3 years ago
ALX

What a let down. I loved wrestling in the 80’s and this machine is just clunky and awful. Weird layout and not fun to play.

WWE Pinball Is a good game It would have better if it had AJ styles on the artwork but still a fun game
3.973/10
4 years ago
RAS

From theme to layout to rules to “toys”, this game is really subpar. Obviously a product of an era that resulted in many forgettable titles, WWE might have appeal to diehard wrestling fans but is otherwise forgettable at best.

I'm not a huge fan of the run of Stern machines over the last decade and a half - the sameiness in the playfield and the kind of cheap feel make a lot of them feel like more of the same, and the lack of original theming sometimes makes it feel like you're playing with somebody else's collectible and not a pinball machine. I'm no Wrestling fan, at all, so I don't really get the nuances of this theme. But the reason I kind of like this more than most of the recent Sterns is because of the wrestling ring. (Yes, I do know what the wrestling ring is). It feels like a throwback somehow to an unproduced 1950's wrestling themed pinball machine, with the symmetry and the cute upper playfield action making the game a lot more fun. (Maybe that's the trick with Sterns of the modern era; the ones with upper playfields or third flippers, like Family Guy and Ripley's Believe It or Not!, are fun, while the two flipper rock and roll games are yawners). In any event, the series of theatrical wrestling matches seems to match the theme well, and that's a cute trick, even if I don't know the actual WWE personalities, the match concept works pretty well. Just a nice design -- for me, in spite of the theme, not because of it.
7.602/10
4 years ago
AK

WrestleMania mini playfield is very cool but the rules are bad on the game it just turns into tag team all day long and I am not a fan of the artwork.
6.768/10
4 years ago
NAT

I have never understood why people like wrestling. To each their own, but it's just a bunch of guys in shorts knocking each other over surely? The art is terrible, as is obvious the theme does nothing for me, the layout is unconventional (not always a bad thing but it's not great here) and the game feels a bit rushed out. The ring is a cool feature for a few games, but honestly unless it was the only machine for miles I wouldn't be drawn back to it.

Update: I’ve had a holiday now where this WAS the only machine for miles and I had some fun learning the rules and getting on the leaderboard, but it’s still just an okay game.

A yearning to keep the ball up in the ring at all times, cant get enough of it.

Probably the least played game in our league, I am not sure I have ever seen anyone pick it unless it was as a joke. It certainly captures the look of a wrestling pinball machine but that Gimmick is a) not that fun and b) takes up a huge portion of the playfield.
7.876/10
4 years ago
DMC

Not much to distinguish this from the LE in my opinion but I find it fun to play and look forward to working out what more there is about the game to discover.
5.742/10
5 years ago
RHO

I'm a pretty big wrestling mark, and I was hoping that the game played better than everyone said. I finally got a bunch of games on Wrestlemania Pro, and while I wasn't completely blown away, I wasn't completely disappointed, either. I thought it shot like a Stern game. But yes, WAY too much time is spent in the upper ring, and most of that time it feels like you are waiting for a lucky shot rather than a skilled shot to put the ball where it needs to go. This isn't something that could be fixed with code, I'm afraid, and that assumes that a code update is forthcoming (which it probably isn't). All of the features on the main playfield aren't all that inviting to shoot, and are dominated/overshadowed by the ring feature--you spend most of the time out of the ring trying to get back into the ring, just because it seems like the most logical shot to shoot! Perhaps there needs to be more modes? I dunno. Sounds and wrestler integration in the game are very well done, and the dots are great. The game has captured the feel of the WWE universe correctly. I wish I could love this game and go against the grain, but I just can't.
3.350/10
5 years ago
TBA

The latest code makes for a very fun pin. The rules are not particularly deep, but when you want to take a break from a deeper game like Game of Thrones or Ghostbusters, WWE is the ticket. The pro is better than the LE because there is no upper play field spinner. This means carefully timed shots off the 'ropes' can land the ball in the center hole for a 3 count pin. All in all a very good game that should be in the top 50.

Fairly good use of the theme. Art package, sounds, and playfield are all tied together nicely. Shots are tight. And game play is challenging. Light show is nice, and the Spike system is interesting. New code is decent enough, and I personally enjoy the layout. Think it gets beat up due to theme.

People are quick to knock this game because the original code was confusing and difficult. After the code update, this game is a lot better. The new code makes much better use of the lower playfield and de-emphasizes the ring. The game is very challenging to try to get through and it uses the theme well. It could still use some bug fixes and a couple tweaks here and there, but as it sits, it is a fun challenging game IMHO.

The worst modern game i have played, the ring is a disaster, boring and poorly executed. I haven't tried the new code yet, but the ring dominates the playfield so I can't see it improving a whole lot.
4.368/10
5 years ago
GIN

Fun pinball machine for a few games, but gets repetitive and boring very fast.
Next12
There are 48 ratings (that include a comment) on this game. Currently showing results page 1 of 2.