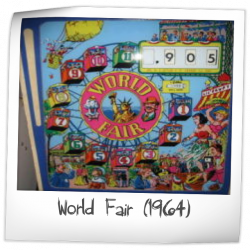 Gottlieb’s 1965 release of World Fair was inspired by the wildly popular New York World Fair of 1964, however, its art and overall theme depict the World’s Columbian Exposition that occurred in Chicago in 1893. At the Chicago Fair, the world’s first Ferris wheel was on display—and it becomes a central motif in this game, represented prominently on the backglass art and through a “wheel” of bumpers that appear in centre of the playfield. The player is challenged to collect a series of numbers via rollover switches, or to have a number spotted by spinning the central disc nestled in the middle of the playfield. Once all numbers are collected, a special is awarded, and a moving lit number can be collected to award further specials.

This game has received 27 approved Pinsider ratings and currently has a rating of 8.284 out of 10.

76 Pinsiders have this game in their collections.

17 Pinsiders have this game on their wishlist.

7 public locations known where you can play this machine.

We have seen this game for sale in the Pinside Market 13 times. The median asking price is $1,250

There are 97 forum topics linked to this game,