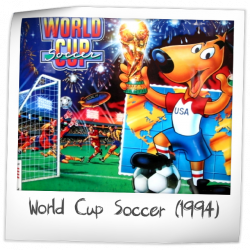 There are 255 ratings (that include a comment) on this game.
Currently showing results page 6 of 11.

Fairly attractive machine with good flow and an interesting theme. It's pretty easy, I was scoring goals like it was basketball not football (the sport Americans call soccer).
Controllable kick-out is cool and the goaltender is a neat idea. Yesterday I had the opportunity to play this gem again. Not much of a challenge but it is always fun to score on the goalie. My wife likes it too, so i think I just have to get one of those. In the price to fun ratio this one is hard to beat.

another ace game. what could be more fun than using a pinball to score a goal?

the launch process is fun and original with the three possible exits, the two ramps are both achievable but challenging, the lock mechanism is a joy to watch, and the big spinning football may be pointless but is certainly a good looking feature.

the best way to play this game for points is to ignore everything else except tickets and travel, or whatever they're called. basically use the ramps to light the left loop to advance cities to the top to LA so you can play the Cup Final. but then don't forget you have to manually keep launching the balls in that Wizard mode, as the game won't do it for you.

the most fun way to play it is to ignore the scoreboard and just keep going for goals, or for Striker's hideout (Striker the dog? really? is that like 'out of bounds' instead of a throw in?) and try to get extra balls and even score goals using that easy scoop called the penalty spot right by the goal where goal hangers like Lineker used to wait to press the flipper button.

the central scoop to start multiball is a tricky shot ..... and i bet none of you can ever remember to press the left extra button for the magna save? no, me neither.

I have had this game for about a week. Initially I wasn't so excited about the sports or soccer theme...but after playing it.... It's a keeper for the collection! WOW! Lots of action, love the magna-save, fast ramps, and goalie shot.

Stopped by a bar to have lunch with a friend and the had The Walking Dead, No Fear, and World Cup Soccer. I spent the next 5 hours playing pinball. Started with TWD, since that is new and the toys pulled me. $5 later a had way too many SDTM with it never touching my flippers. Next up was NF ( in its defense, my parent's own it, and I've played close to 500 games of it), and after explaining the scoring to my friend I posted the high score. We spent the next 4 hours and $30 playing WCS.

What can I say it was a blast. The soccer ball puts a great spin on the pinball, scoring goals is infectious, and even after 40 or so games, I wasn't able to make it to the World Cup, but man did I have a ball trying ( that damn tv shot)

Blu has owned this game in the past.

I've had this game for about a month now and I am loving it. While it's not super difficult to get to the final with Germany I am finding it to be a very fun game that really appeals to guests. The magna save could have been designed better but overall it's a well put together game.

I'll update the review once I have had more time with it but for now I am very happy that I added it to the line up. Demo Man left to make room for it and I don't regret that decision at all.

Seems like a great game that is a little bit undervalued. Definitely play one if you get a chance.
7.904/10
6 years ago
CMB

Fun game to play with a group of friends. Would like one for my collection!
7.687/10
6 years ago
JCZ

This game was a pleasant surprise. I really did not think it would be as much fun to play as it is. It has some cool toys and gimmicks and a good playfield layout as well. The rules are simple (and obvious) which only benefits gameplay in this instance.
8.233/10
6 years ago
JPM

Great playing game and an interesting layout. Moving goalie toy is very cool. Final draw might be the most frustrating shot to hit under pressure!
7.892/10
7 years ago
MRN

Love It!! Can't wait to get one for home.

Good for a relaxing game. Not overly challenging but is fun when in the right mood. Overall a decent game.
6.932/10
7 years ago
RAP

This was another pleasant surprise. I'm not a fan of the art and was never into soccer, but the playfield layout was great. This one kept me going.
8.916/10
7 years ago
JDM

The first pinball I played at length at a friends house which basically got me into pinball. One of the best looking pins with LEDs. Still definitely one of my favorites and probably the next one to be added to the collection.

Get into a flow, rock this game and hear that crowd roar!

Interesting game. The design is so fluid. Great ramps, great light show with some LEDS. So much more going on that making goals, which is what the casual player won't see.
How/when to use the magnet is something I'm still trying to figure out. Nonetheless, I love that it has a magnasave.
The dog on the backglass doesn't bother me at all. Who cares really. It's an excellent, well designed pin. Skill shot is cool, but somewhat luck of the draw.

Blackbeard has owned this game in the past.

Whoa- This game looks wimpy, but can be set up to be not easy and can fast as hell! (fYI- My posts are up to the top, my left kick out starts at zero and my wax job is slick right now.).

WCS has great flow with smooth ramps and a fast left loop with a spinner. The right ramp shot and final draw scoop hole are not easy shots. The right ramp shot can make you pay dearly, so stick with the left ramp, unless you like playing dangerously? Yes, you can score goals, but can you do it during multi ball and hit the ramps to start another round and do it again and again and again? Can you beat Germany in the Finals? You better have the save on the left lit up also because you will need it.

WCS is so fun and great for families, wife's and nonpinheads, but challenging and super fun also for good players. If it is too easy just put the posts up, turn off the left kicker and give it a good wax and have fun.

I remember I saw a PAPA video on the game before I got it and was suprised how poorly they all did on their rounds.

Kind of cool that you have to beat Germany for the cup and Germany won this years cup. Anyway, great bang for your buck pin that has "one more game" written all over it. It will stay in my collection for a while.

This game is so much better than I expected. Very fast game with excellent flow. Loads of features: large spinning ball, rollover switches, magna save and shooting at the moving goalie doesn't get old, especially during multiball.

Gameplay is up there with the A-listers but the artwork and theme lets it down.

mark9 edited previous rating on December 05, 2014.
mark9 has owned this game in the past.

Pretty fun game. Played it at Lyons; would like to play it some more to kind of discover more about it. The magna save feature is fun... and trying to sneak the ball past the goalie-on-a-stick is kind of neat.
8.122/10
7 years ago
DOC

I got a chance to check this pin out. Surprisingly good. The art work is so-so, but the game play excels. Getting past the goalie is the highlight of the game and worth big points. The spinning soccer ball throws the pinball off in random directions. This is a top 50 game for sure.
8.504/10
7 years ago
JES

A great family game.. My kids love this and it was the very first pin I owned. Its got very good game play and not real difficult to understand. I am not much of a soccer fan but am a sports nut.. To bad the backglass and cabinet just had a little more to it..

I was very surprised with this game. Although the back glass and cabinet are a bit ugly. The game itself is quite fun. Great for all types of players. Great family game. Very affordable game.

foxyshilo has owned this game in the past.

This is a game I didn't really like at first, but the more I play it the more fun it becomes. At this point its a game I play every chance I get. Good ruleset that's relatively easy to pick up on & the game never ceases to be a fun play.
PreviousNext1234567891011
There are 255 ratings (that include a comment) on this game. Currently showing results page 6 of 11.