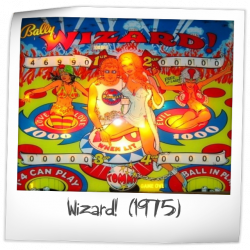 Wizard!, released in May 1975, was Bally's highest production flipper game to that date with over 10,000 units produced. The game comes at the tail end of Bally's electromechanical production schedule, and sets the stage for the company's solid state success in the years to follow. Widely regarded as one of the first proper licensed games in pinball history, Wizard! features the likenesses of Ann Margret and Roger Daltrey, stars of the 1976 Ken Russell film Tommy (a screen adaptation of the Who's rock opera of the same name). Other than its classic theme, Wizard! is notable as being the first game to showcase playfield “flip flags”, a feature used on only a handful of other Bally games.

#Sample-games, as seen on the flyer, had the short-lived "upside-down-frame" on the backbox and cabinet-colors were black and red instead of blue and red. 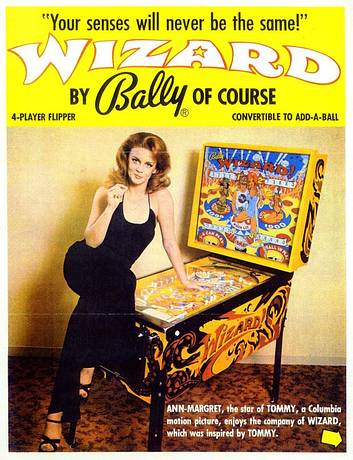 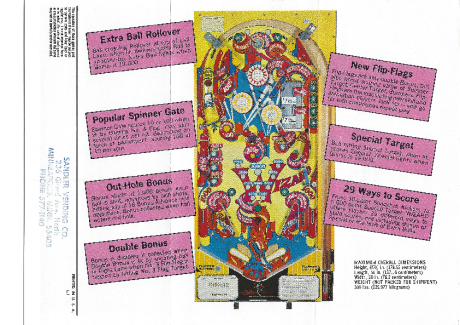 This game has received 66 approved Pinsider ratings and currently has a rating of 7.708 out of 10.

307 Pinsiders have this game in their collections.

101 Pinsiders have this game on their wishlist.

50 public locations known where you can play this machine.

We have seen this game for sale in the Pinside Market 77 times. The median asking price is $1,599

There are 393 forum topics linked to this game, 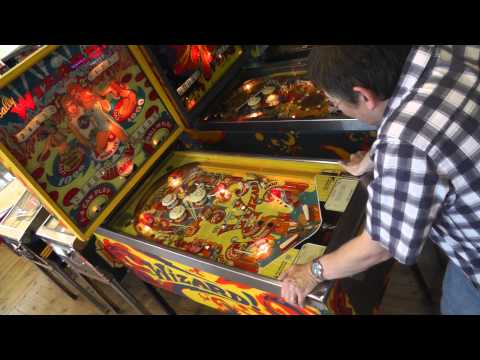