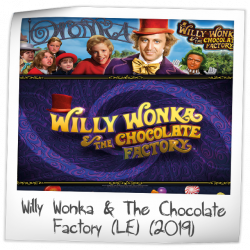 This game ranks 1st in the game group "Willy Wonka & The Chocolate Factory". The group itself ranks #17 in the Pinside Pinball Top 100.

There are 49 ratings (that include a comment) on this game.
Currently showing results page 1 of 2.

One of the best shoots in pinball. Typical JJP quality, this is how all pinball manufactures should make their products.
I have never watched the movie from start to finish, it's really not my type of movie but this game is brilliant!
I am a fan of Pat Lawlor games, as i love the flow and depth of the code.
I think I will be in the market for a Wonka....
7.867/10
24 days ago
KOS

the Game is fun,but too easy to play.Too long of ball times, not for me

One of the best Layouts out there, the theme brings magic to the family, great combos to shoot, great use of the upper flippers with satisfying shots ! A fun machine, to play for those that dont want to dig too deep on the code and also fun for those that want a really complex game.
Gobstopper MB is easy to access and the kids MB works like the MM multiball.
Need more time to understand the code and will change the review in a month or so.

The game is smooth as butter and easy to play.
I wish somehow they did more to immerse me into the Wonka world.

The playfield layout is phenomenal, a ton of action and great use of the 4 flippers. One of the best lightshow in pinball. The rules are different of many others games i play, deep and fun. A real jewel . Near the perfection for me.
9.840/10
4 months ago
???

WOW, is Always fun to discover a JJP machine. Very very fun, deep and beautifull. A lot of shot to do, not too easy. The animation and theme integration is awsome. A keeper for me.
7.159/10
5 months ago
ACE

I enjoyed playing the game and am a huge Wonka fan. I think because I lean more to being a casual player that some of the shots just didn't do it for me. The layout and gameplay are amazing. The lightshow when you are in the Wonkatania is fun and reminds me of the Gene Wilder movie. Lawlor did an amazing job on the design of this game.
8.944/10
5 months ago
RTW

This is just a fun game. It's easy to walk up to it and play. The machine will guide you through objectives, there isn't a ton of guessing...it doesn't have some crazy, deep complicated ruleset that you have to have mastered by watching a hundred youtube videos to post a good score.

Family friendly theme that is masterfully integrated...love the gobstopper toy. For kids of the 70s and 80s it is nostalgic without feeling old.

Mikespin has owned this game in the past.

It’s just not intuitive where the next shot is supposed to go. Otherwise a very good machine.

Another home run for JJP!
Like a fine wine it gets better and better with age.
Bolted to the floor.
Highly recommend this pin to anyone that is interested!

I finally received my WW LE. I was originally in for a CE but JJP pissed me off when they substituted a cheaper topper for the one originally shown for the game. So I bought an LE and saved some $$ and I am glad I did because it is a solid game in all respects. And it now, thanks to JJP's latest offer, has the same topper, for a modest extra sum, that was originally supposed to be on the CE. I have the other candidate for GOTY, Stern's JP LE and truth be known, it is hard to pick between it and WW for the Twippy. I voted JP, my wife voted for WW so there you have it- a "nation again divided". But, we remain good friends nonetheless 'cuz we are both right.
For specifics, I find JP hard to fault whereas I think the music, sounds and speech in WONKA are a bit repetitive. It also tends to have too many 'stdm' balls but that is probably more on me than the game. I just have to get better and WONKA will likely aid me in doing that. There were a very few quality control issues, none too serious, with WONKA whereas JP has been solid from the get go. Having said all of this, both games are 'bolted to the floor'.

What an awesome job Pat Lawlor & JJP have done here, there are so many shots from the 4 flippers, loads of modes to explore, the theme and integration is unbelievable it really keeps you coming back for more.

Ideal for a home environment as any JJP game is due to the depth of the rule set.

Pat Lawlor at his absolute best.

Loving my CE so far. Still figuring out rule set but the call outs are fantastic and really guide you well. Like POTC (JJP) it’s complex and deep with lots of ways to play and have fun.

This is my favorite game right now. I enjoy the flow and the appeal to a more casual player. The rules are deep, but not overwhelming. I personally would have rather it been a wide body though.

Game play is good. The lighting could be a little brighter but the light show is awesome.
9.336/10
8 months ago
WHP

Great game between Dialed In and Wonka Pat has created to modern treasures.
9.536/10
9 months ago
TSC

Jersey jacks best game to date. I can feel pieces of multiple Lawlor games in all parts of this machine. Bottom line, it shares the happy medium of fun and difficult shots that I enjoy. Rules and layout can only leave.. Pure imagination.
9.055/10
9 months ago
MDM

After playing my Wonka Le for awhile, the quality of the sound is my only complaint. I wish that I was able to hook up an external sub woofer to at least improve the sound somewhat. Pirates sounds like a full hd surround sound compared to my Wonka. Besides the sound quality the game has flow for days! Love the shots, layout, and artwork! Looking forward to seeing the code develop over the coming years.

Plays very smooth.The upper right flipper shot is completely blinde? Not sure why nobody mentions this, I get tired of stretching my neck all the time.The casino sounds and lack of a challenging shot pulls me away after a few games.

Next12
There are 49 ratings (that include a comment) on this game. Currently showing results page 1 of 2.