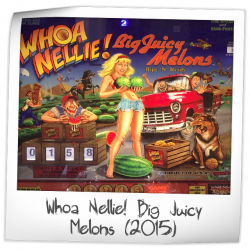 This is the "mass-production" version of Whoa Nellie! Big Juicy Melons - the "Boutique" pinball machine originally from 2012, manufactured by WhizBang Pinball (Dennis Nordman and Greg Freres). The game is built on Stern's SPIKE control system.

Game play is slightly different from the original WNBJM. Each top lane on the left lights just one pop bumper (changing scoring from 1 point to 10 on that bumper). The gobble hole has been replaced (there is still a hole, with a turkey reference; but the hole has an ejector instead of ending the ball in play).

The cabinet is custom. Meant to look like an antique fruit company packing box, the cabinet is made of distressed wood. It can be deployed with traditional pinball machine legs; or with a custom lower cabinet to be used as a base. This game has received 68 approved Pinsider ratings and currently has a rating of 6.432 out of 10.

There are 32 rating comments for this game.

41 Pinsiders have this game in their collections.

We have seen this game for sale in the Pinside Market 13 times. The median asking price is $4,200

There are 95 forum topics linked to this game, 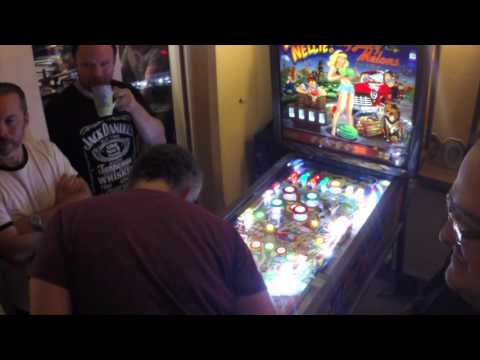