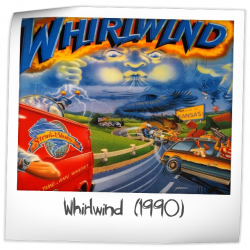 There are 317 ratings (that include a comment) on this game.
Currently showing results page 1 of 13.

I found it bland. The layout feels weirdly bare and the playfield artwork is functional at best. I wasn’t remotely excited by the spinning disks nor the fan topper (my five-year-old son loved the fan). After playing, I thought maybe I’d missed something, so I watched a PAPA tutorial and, again, I couldn’t even finish the video because it was too dull to watch.

I’m sure this was fun and innovative when it came out, but it feels like it hasn’t aged well at all. It feels like a thousand other pinball machines, but with a cooling fan on a hot day.
5.652/10
5 months ago
WAL

This is one of the best System 11's for sure, but it has a few annoyances that keep me from wanting to own one again. I owned a diamond plate version for a few years. The main annoyance for me is the cellar holes. The balls just go in there WAY too often, and the audio that goes with it gets just as annoying. The nice things about this game are the artwork, there are some satisfying shots, especially the combo. I think there might be a 5 way combo that the software recognizes if I remember correctly? The loop shots are great also. Overall this is a good game, maybe a great game even, but I'd be happy if I never hit a cellar shot again for the rest of my life.
7.948/10
6 months ago
LXL

One of the first pin i played when i was a teen and the first one i bought when i started my collection. Very nice playfield design and a more complex ruleset than any of the other system 11 machines which greatly improve the lastability.
8.000/10
7 months ago
BWP

I played this machine when I was a kid in the 90s at a Pizza place. It's in my Wishlist because it's part of the good memories of my childhood. However, this game has grown on me. Not only is it a classic diner pinball machine, but it has 6 pop bumpers and not 3.

Dr_Blake has this game on the wishlist.

FunGuy has this game on the wishlist.

Whirlwind is an excellent game. The topper and spinning discs integrate well with the theme. The lightning show is also great. Gameplay is a lot of fun. There is plenty to do and the rules seems advanced for the era. The layout is similar to Earthshaker. I owned both and decided to keep Whirlwind. The callouts are fun. Overall just a really enjoyable game.

RonSwanson edited previous rating on February 12, 2022.
RonSwanson has owned this game in the past.

Did not like this machine,not as good as others in same ranking.
8.221/10
9 months ago
KVV

Really great and fun game. The sounds are wonderful, with some very catchy music and callouts. Maybe some more callouts would be nice to let the player know where to shoot or what happens during a game. Layout and shots are nearly perfect, everything feels really smooth and flowy. The only thing I don't like is the dropdown target that goes into the pops, that feels like a slow down to me. Also the target in front of the upper pops feels a bit boring. I like how the topper actually interacts with the game and player, really nice idea. The theme is also a great original one and blends everything together very nicely.

The only downside for me is the shallowness of the rules. Getting the wind directions to start multiball gets repetitive, and after achieving the Super Cellar Door Value there's not much more to go for than another Super Cellar. I wish there was some more progression to work towards, but since it's a System 11 this has to be viewed in its own timeframe.

Kevv has owned this game in the past.

Taxi was the game that got me into pinball as a child, but Whirlwind renewed my interest in pinball during my college years when the game was sitting in the student center. Game has good flow, requires well timed shots, and the spinning disks add a new dimension. The lighting is amazing and immerses you into the game, along with the fan on top of the backbox. Good pin for beginners and provides experienced players with a challenge. Maybe only knock is that extra balls are too easy to earn for advanced players on factory settings. I enjoy thunderstorms, so the theme is right up my alley. Definitely a classic!

Ryguy80 edited previous rating on February 07, 2022.
Ryguy80 has this game on the wishlist.

I have played this atleast fifty times now. I acquired it not too long ago. But I don't think this this machine will be going anywhere as it's probably in its forever home. It has a great theme. The layout is good. It has simple enough shots and strategic shots to make it great for beginner to advanced players. It also has the bonus fan that blows on you and spinners on the playfield which makes it interesting as well. So all in all a well put together machine.

The best thing about this table is when the fan topper kicks in and blows air in your face.
9.200/10
1 year ago
RBG

The game that taught me how to play! The side flipper timing takes a lifetime to master. Just love the theme. I love this game like my own child!!!!

Mr_SoFlow edited previous rating on November 23, 2021.
Mr_SoFlow has owned this game in the past.

The first pinball machine I played back in the day. I got one about two years ago to start my home collection and it is just awesome. It’s amazing that many of the current new releases with all the gimmicks and toys can’t come close to how this plays and how it keeps you coming back. It utilizes everything right. The spinner, drop targets, pop bumpers, multi balls, shots-it is to me a true representation of a great pinball machine. One of the best for sure.

My first time with Whirlwind was at a laundry mat in Jersey City New Jersey. I had to stay for a month a buddy's place as I looked for an apartment since the one I was suppose to move to fell through. At one point I had to do some laundry and around the corner I went. As I am killing time with my washing I have to try out the pinball machine.
I pop my quarter in and start to play. I remember playing my normal trap and try out shots playing conservative and trying to make the game last long. Then it happened. I don't know what I did but I hit something and the next thing I see is the center of the table spinning in a circle and my ball just warping and re directing off into weird angles and shots. I had never seen anything like this before in a pinball machine. Before I know it the game is over and I have to play again. I probably dropped another $2 in quarters playing games while my laundry sat there. It was fun and a game that definitely made a lasting impression and one of my all time favorites.

Coyote12 has this game on the wishlist.

Best System 11. The toys are awesome, the integration of the topper and information leds in the backbox fits just perfectly to the backbox. And it's beautiful. The theme is wonderful.

Kjarkur has owned this game in the past.

One of the Lawlor classics. Love the theme, love the fan, love how satisfying the multiball build ups and jackpots are. It’s not my favourite game but I’ll always play it when I see it and the sound package is hugely nostalgic.
10.000/10
1 year ago
???

Own both Funhouse & Whirlwind. Sold the Funhouse as it did NOT live up to its name. Whirlwind is in a class of its own and really ought to be #1 from its era. I see they are finally fetching top dollar on this pin and their is a damn good reason why.

One of the best games ever.

I keep missing out.
I have wanted this machine since I first played it at a greyhound bus stop in Indianapolis when I was a teenager. A year later, I encountered another one at another Greyhound bus stop in Colorado Springs.
Did Greyhound buy all of them??
Yes there was one in Minneapolis too, and in Kentucky, and some place in the middle of nowheresville Kansas.
Since then I have seen numerous ones for sale, either I didn’t have the cash or wasn’t quick enough to contact the seller.
I suck at playing whirlwind.
Seriously! I am good at playing many pinball machines, but Whirlwind isn’t one of them.
A game lasts less than 10 minutes for me, although I have had a few great scores over the years.
But I love it! It’s frustrating, fun, and challenging.
In the end, it’s not really a very special machine. The gimmicks are neat, the spinning play field, a fan on the top that blows at different speeds, “uh oh, it looks like rain!”
This machine has special, private, memories for me as well, traveling across America as a teenager.
My official rating score on here is biased because of that. For those without the nostalgia I would say it realistically deserves a 7.5 rating.
I never end up getting to buy this machine, it’s always eluding me. Just like those many things that I was searching for when I was a teenager playing pinball at Greyhound bus stations along the way to somewhere.

thetylander has this game on the wishlist.

It really doesn't get much better than this, one could argue that it's "toy" (a fan!) is still perhaps the most well integrated device in a game ever seen in pinball even to this day! I've owned three in the ten years I've been collecting and it's taken owning a bunch of cool (design and rule wise) Sterns to truly come back and appreciate the subtle charms and challenge that this machine holds: it's a high watermark for it's era and an all time achievement for pinball.
8.864/10
1 year ago
BJD

This is the game that drew me into pinball, very young at this new place in town Chucky cheese. So my opinion might be a little biased. But I still love this game, the shots are fun, the whirlwind spinner’s keep you on your toes, the ramps where amazing at the time. One opens up!! And you have to hit that other ramp perfectly with the 3 flipper to get your millions shot.
After all these years I still play this game. Add a deep subwoofer and LED flashers to the cloud and back box and you won’t be disappointed.

This is real pinball. This is one of the all-time best games made.

HauntedSpaceship has this game on the wishlist.