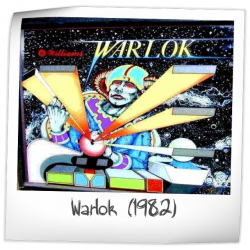 A friend and I have passed this game back and forth a few times. He's not getting it back again. :D
I'm mostly a 90's+ collector/player, but this game really stands out as one of the best and most fun solid states.
The rules are about as good as they get for the timeframe. The playfield artwork and backglass are FUGLY, but I'd rather have a sweet playing game than pretty artwork. Both is nice, yeah, but Warlok playability makes up for the artwork shortcomings.
Better than Blackout which the layout is very similar to.

dgoett has owned this game in the past.

Warlok is a game that received an upgrade and a downgrade from its previous incarnation: Blackout. The design credits say Mike Kubin... but this is heavily based on the Fernandez design.

The Pros:
The upgrade had to do with the game rules and how this wonderful layout was implemented even better than the original deck. The slight change of the angles on the lower playfield make a huge difference in how the ball bounces back and forth, side to side. Make sure your control skills are up to the task or your ball is heading out towards the outlanes. three lanes with spinners is always a good thing. The rules of knocking down the 1-1-1, 2-2-2, and 3-3-3 targets, building up bonus and collecting on right gate to the orbit/plunger lane is a great way to build up to a really tough shot... and then collect. Righteous! Light all 3 spinners (3 spinners on a pinball game is always a good start for me), rip the left spinner and have it loop around to the upper right spinner on the same shot. WAY SWEET! So many shots on this game... I gotta play it some more! This game has more flow on it than most games made years later with plastic ramps and all that multilevel stuff. I imagine Steve Ritchie would appreciate this table.

The Cons:
Seamus McGlaughlin made the BG and the PF look like a mess. Note to the art department. I would rather have a great looking art package on a pinball deck as compared to playing "Where's Waldo" for the hidden faces on the game. Id' like to recreate a new BG with a Moebius theme. That would be much better IMHO.

The Takeaway:
A great table that takes a really solid layout and makes it better with a well thought out ruleset that keeps you moving and thinking towards your next bonus payout. A total shooter's table that keeps your sniper skills on point. Looks worse and plays better than the original game Claude Fernandez laid out with his team. Please focus on the scores on this game from the game design and play and play not the artwork. The game play is where this deck shines. Since this game is SOOO ugly, it gives you extra incentive to keep your eyes on the ball. Not many of these games were made so... GitSum' when you can. The more I play this game, the more I like it. It's on the want list. Warlok is not a looker, it's a player. Play on player... play on...

Check out the righteous Pinball Parlour breakdown of this deck here:
http://www.youtube.com/watch?v=UESH4j3ppvg

Update: The more I play this game, the more I like it. Matching the 1-2-3 lights in a row for extra ball (listen for the goofy audio cue) makes means that you have to shoot the center of the 3 targets in the drop banks, that is... unless you knocked them down already. Then all you have is the upper let standup to wait for when the four lights travel around the table in the counter clockwise direction. The upper left loop lane may be worth a bit at at 70k, but so is a 21k complete bonus ladder (which leads to double PF scoring!) bank at 10x! The flippers have the stern spacing/post that we have come to know from Kubin and Steve Kirk making for a different choices/ perspective with ball angles and flipper skills. I love the lighting strike effect when the left loop is completed. Would have voices been a plus,yes. Would this deck benefit from multiball, certainly. Would the game have looked better if any other artist besides Seamus did this package, absolutely. But for what it is, this deck is incredibly well balanced and it plays like a champ. How did this game get to Williams when he was still designing games Stern v1... does anyone know? This is my first Mike Kubin game and man... it's a true player!

Don't break your pop caps... they don't make them anymore.

Update v2:
Since having this game for a month, it's safe to say that this game is not leaving the stable. I love the left orbit lighting strike! When I tried playing the game with the Belsito mod (remove the one way gate at the upper left hand side of the PF) and the game plays great. The top lanes become a true skill shot and the spinners become even more of a priority) with or without it. Side to side sling/bumper angles\ tension mean that every ball out of control is at great risk of heading out the outlanes. You are only 4 shots away from an extra ball at the start of each ball in 2 different ways! Once the PF double scoring is lit... time to rip the spinners from either orbit! The standard issue Kirk/Kubin flipper layout means that you have all the speed of a williams table with the angles/ consideration of the middle post between the flippers. Angles and defense changes with this layout and it's righteous! When waxed and properly maintained, this game will always have you on your toes! Find one if you can and play the heck out of it!

Update v3:
Still playing it quite a bit. For some reason, I'm playing my Defender and this game more than my other games from this era. Strange how that works, but these two "rare" pinball games are heads and shoulders over more commonly known and played Williams games of the era like Blackout, Firepower, Gorgar, Alien Poker and Black Knight for me!

Update v.4:
There are three main strategies on this table.
1) Left orbit. Take out the top arch one way gates if you are feeling evil. Enjoy the show with each completed loop.
2) Drops to light the spinners for 2k a spin. Put this on top of a completed top orbit and you can easily make 100k a shot with this scoring stack.
3) Stick with the drops and triple seven the bonus rainbow out to double your PF scores. The X-Y-Z lanes will give you up to 10x which can be collected on the lower right hand gate to the shooter lane. Add this on top of strategies 1 and 2.

Do the happy pinball dance. Rinse and repeat. I did find that adjusting/removing the posts on the outlanes made a HUGE difference on game scores. I recommend the highest post setting and I'm going to try a smaller post as well. Removing the posts is overkill, but if you are in an pin-cruel mood... I still lose balls between the flippers, but it is a more rare occurance than it used to be. I still get caught by slow side to side bounces from the top of the slings or a geometric bounce from the 1 targets heading down the pf. But once you get used to the Stern (v.1) flipper layout, it's a great way to play!

Update v.5:
Left orbit all day. Drops will come. Bonus X will come. Collect Bonus will come. I Adjusted the lip or the upper right guide of the orbit to cause inconsistent and more dangerous exits from the orbit screaming down towards the Steve Kirk flippers and post. Skillful players can still cab-slap their way out of this, but risk/reward must be dialed in before this design becomes a 1 shot table. There are no saucers or any place for the ball to stop on this design. Drops and spinners. Pure single level pinball pleasure. Complete your bonus rainbow for 2x PF scoring and collect the 10x bonus and left orbits for the big scores!

The quality of game for the vintage of this game is filled with rare air and those games that play as well as this one does tend to be much different ideas implemented in pinball. But for pure, fast single level gameplay, this title may be the best of it's kind.

I got lucky and found a second copy after selling my first beater for silly $$$ and the promise of the new owner to restore it to it's former glory. Find one if you can and play the F@&K out of it... and try not to throw yer hands in the air when the KOWWW-KOWWW-KOWWW sounds off!

EDIT:Played this again, discovered the Orbit shot and the deeper strategies. Much better than I first thought. Well worth putting the time in.

It uses the same sounds as Flash, it's kinda ugly too. So not the greatest of 82, but it feels crisp and snappy to play especially after a session on older EMs. Nice flow too.