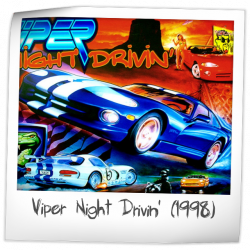 There are 18 ratings (that include a comment) on this game.
Currently showing results page 1 of 1.

Underrated game for sure, just like every Sega. Has some really awesome lighting effects and I really like the layout of the Playfield. Art is ok. Sounds and music is also just ok. Animations are pretty good. Pick one up if you get the chance.
9.372/10
1 year ago
???

Viper Night Drivin' is a hidden/forgotten gem in the pinball world! Mancow behind the mic, Slash on guitar, the Dodge Viper, Glo-Balls, and the whole thing is so 90s. How can you not love it!

Its silly and odd and thats oook

HighProtein edited previous rating on May 15, 2019.
HighProtein has owned this game in the past.

Bought this as my first home pinball machine and loving it so far! Great riffs by Slash, great ball movement and flow, and very cool lighting effects, especially when I keep the lights low or off. While the music is great, the sounds themselves are just okay, and I couldn't care less about Mancow being in the game. Have only tried with glowballs so far (which are very cool) though will try with standard metal soon too.
8.834/10
3 years ago
IAN

just bought this game, and i love it. i started out with the neon balls, but switched them out (possibly temporarily) for steel balls. i love the game play. the shots are difficult, especially during timed rounds. however, the player quickly adapts and the playfield becomes a bit friendlier after a couple dozen games.

the lights and flashers are amazing, and extremely shot reactive, which adds satisfaction to all shots. it is a blast to play at high volume. i love the black light effect, which illuminates the play field in a unique way. even without the blacklights this game is A++++. i love the game and it will stay in my collection forever.

HEAD_boss_HOG has owned this game in the past.

After getting mine set up and dialed in, this is an amazing pin. With new glo balls, and settings to steel balls this game is fast. So far my only complaint is the drain from the pops, which slows down the flow. But works well during multi ball. The glo balls are lighter, so getting control can be tricky and challenging. Lightning is amazing, but it does need the right environment to be truly appreciated.

A good effort by Sega, and mostly overlooked machine.

So, I'm a huge SEGA fan. I Love their games, for the most part. I'm trying to get a nice solid collection of SEGA titles, and I just picked this one up.

First off, I certainly know this machine has shortcomings and understand that a review could be composed of a long diatribe detailing what is wrong with this game; The audio is weak, the dots could be way better, the rules are really, really thin, lack of shots, the weird rock behind the racoons.. Racoons? and Man Cow??... WTF??

The glow balls play different in a good way. Like a machine full of power balls.
The black lights are a neat gimmick.
Lots of super quick shots returning to the flippers.
Four ramps (if you count the bridge-out ramp).
I like the multiball rules for jackpots. You have to hit shots in order to advance to super jackpot, if you don't do it in a set time, you have to start over.
Wicked fast when you're in the zone.

Specific bitches I have that aren't part of what is normally bitched about:

The exit from the pop bumpers is painfully slow. It wasn't designed to have enough vertical drop, so the ball just slooooly rolls out of there into the right orbit.
The post diverter on the orbit is clunky, and engaged too often for a 'flow' game.
The 'adult' audio is really bad. Really, really bad. Embarrassing.

I find it funner to play than it should be, I guess. The total is better than the sum of its parts.

tamoore has owned this game in the past.

Dreadful pin, tower thing makes no sense, just felt like a poorly constructed machine. Walked away from it with a credits still in it.
5.037/10
6 years ago
ZUL

Viper Night Drivin' is another Say-Guh game that comes up short in the quality and rules departments.

The Pros:
Glo-Balls are a nice touch as are the black light modes. The layout is incredibly smooth and fast.

The Cons:
This game may represent the ultimate Fan-Man layout with 10, yes... count them 10 lanes/ saucers to shoot for, and nothing else. The modes are severely unbalanced and multiball can become tedious after a while (even WITH glo-balls!!!). This game absolutely must be set up and tuned properly to play as it should. Who is ManCow?

The Takeaway:
This game may appeal to some players and car collectors, but I get bored with this deck really quickly. The raccoons are the best thing about this game by a viper night drivin' mile.

Update:
Got a chance to play this game when it was tuned and playing well. The multiball rules are better than I remembered, but modes and the rest of the gameplay is still heavy on "meh". I also like this game better with steel balls as compared to globalls. taking the globalls out of the game i was surprised at their weight. But something is still not right and the physics of this game are different for it. That and most of the time this game is seen it is dirty as mud and the balls seem to hold onto a bit of that dirt (scratches and cracks in the balls?) and then have the tendency not to glow anymore. A boring layout with a few interesting bits in it do not make for more than a fast and boring game. The center ramp is a yawner. All things considered, it is a great starter game for a dmd. skills can be practiced here. But please put steel balls in the game and get ready to move onto better things once you tire of it.

Sounds good on paper (well, good-ish...), but ultimately does not deliver. The layout is too tight and generic and the rules are pretty boring. The worst part is still easily Mancow *shudder*.

Suicyco edited previous rating on December 20, 2016.
Suicyco has owned this game in the past.

This game needed to be fixed up. Left flipper and one lock issue really messed with the fun on this game. The rule set is ok, the glow balls are indeed different to play with but seem to get damaged easier.
6.535/10
8 years ago
JLM

Someone wrote that to appreciate the glo-balls, one has to be in the right environment. I wasn't! To me, the main merit of this game is the demonstration that traditional balls are way better, and that we should stick to them (and forget the price of these balls!). Feeling with these glo-balls is odd - I wonder how much better I would rate this pin with regular balls?
By the way, what are these raccoons doing ? Acting like AFM's martians?
6.317/10
9 years ago
EMO

I played forever on 4 quarters,game is to easy and the glow balls are different.should be more like TZ and only have 1 glow ball with special scoring when it is in play.pretty good game.
9.913/10
10 years ago
POW

Nice playfield,good song,very good game play,only 1100 games produced,black light is very nice,video mode
and like I said only 1100 game so not lot of people has rating this game
7.284/10
10 years ago
DEL

The playfield was kinda dark for my tastes. The glo balls were cool to look at but seemed to have different physics than a steel ball. Didn't like the way they moved around. Even despite the ball saver this machine was a drain monster. The ball saver was probably added later just to make the game playable. Activating it is kinda awkward as the button is on the front of the machine. Would take some getting used to. Not sure what Devils Tower has to do with car racing? Music was cool and the sounds didn't seem to get too repetetive, but certain shots made gun sounds, which didn't seem to have anything to do with the game. Play was fast and the rules weren't difficult to figure out. Generally fun but the constant drains right down the center were quite annoying. Wouldn't want this in my collection. The match feature is a bug splattering on the windshield which I thought was cool.

1
There are 18 ratings (that include a comment) on this game. Currently showing results page 1 of 1.