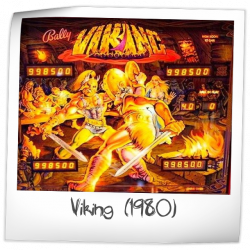 Classic 1980 Bally machine with enough features to keep the player busy. Inline drops, 2 saucers, center spinner, pop bumpers above the outlanes, outlane save gates, rollovers. Table looks more challenging than it appears and has a good replay factor with its combination of looks and play. An Odin-like voice wouldve been cool, but I dig the typical 80s sounds. Nice artwork/red cabinet combination.

This pin I think would fit well in nearly any collection and would complement other early solid states, despite the fact that it shares specific features with other pins, such as Medusa (center spinner) and Centaur (outline save gates). Im digging saucer shots much more lately and I like layouts that feature them
at the top where the ball launches into play. Right orbit shot into the left saucer is a nice feature as well.

One of my favorite Bally machines. The timer on the spinner is great, 10X on the drops if made in sequence, the 50K timed shot always seems to come up when the ball is on the left flipper, in line drops for bonus multiplier, great art package...this one is here to stay.

In line drops and a bonus collect, only complaint is that it doesn't have 7-digit displays, but it can now thanks to x-pin!
9.153/10
3 years ago
BXV

Probably my favorite 70s/80s Bally game. Hitting the spinner and the inline drop targets feels so damn satisfying! Would love to add this one to my collection.

Got in about 20 plays at PAGG. Have played this game 3-4 times over the last 4 years. Such a looker.

OVERALL:
It doesn't make my top-20 1980's list due to the ok sound package. Get me an upgraded sound set with voice perhaps and we have a top-20 winner.

I play in a Viking-themed heavy metal band, so this game was a must-have in my collection. I tracked one down that was pretty beat up and did a good cleaning/waxing and solved some lamp issues, replaced a bulb socket and now the game is great! The inline drop targets are a real challenge on this game. I used to have Viking next to Paragon, so playing Paragon and switching back to Viking made the Viking pf seem way tiny, but the inline drops are just as tough. This game is a drain monster and on my game, the tilt was removed due to the major nudge factor on this game. The outlane drains are BRUTAL. I find I either have a good game that goes for awhile or I drain all balls in moments and then I try again. The artwork is amazing and the sounds are great, even if the background sound gets annoying...depending on how many beers, of course. I have this next to my Medusa and it's cool to have two pins with the same backglass artist next to each other. A rare game with a cool theme. I will be keeping mine for a very long time!

A beautiful game, an extraordinary number of things to shoot for given the era it was made.

Love machines of this era! It's just that I like this machine the least of all the machines I have played from this era!

First machine I ever bought. Artwork is awesome - as far as playfields go the only one that looks better is Paragon. Lot of fun to play, and a lot of shots and drop targets to go after. My only real complaint is that if you're a decent player you can master this one pretty quickly and proceed to kick the crap out of it in 80% of your games, which is why I sold mine.

SteveRivet has owned this game in the past.

Whilst the artwork is great the overall design of this game is flawed. Was there too much going on in the mind of the designer? Whilst I can't say I have played this game much it never struck me as a good game and in truth I don't really care playing about one ever again.
7.690/10
7 years ago
ZUL

Viking is a game that has lots from other great games: Matahari: top saucer, top lanes and right lane. Playboy: ex ball rollover, shooter to the top arch and right lane. HGTR: spinner in the middle of the table and inline drops. Centaur: Inlane/outlane gates. So why does this game just not feel like it should?

The Pros:
Cool layout and very nicely placed shots. The theme and artwork is superb. Getting the ball into the left saucer from the right orbit lane is incredibly satisfying. sequential drops always make the shots you take count.

The Cons:
The "meh" factor is incredibly high on this table. I just don't know why. Is the game designer trying too hard? Who knows. All I know is this table doesn't play as good as it looks.

The Takeaway:
I don't know if even fresh rebuilds, wax and rubbers on the pf can save this one... but you'll never know if you don't try.

Update:
After playing a well tuned copy of this game, I have to say that I like it a bit more. The inline drops on the left are challenging and dangerous and necessary for big scores. The flippers, especially the left flipper Hass to be very strong if it’s going to make the S path all the way up the playfield into the saucer for the bonus collect. I’ve seen a few people just play the center spinner as well and between these two strategies win games. there are a couple of other ways to scores notably the Ten X on the drop targets on the right, but the bonus collect is where the really big points are going to be. There’s also the 50,000 points stand up on the left which makes the siren similar to what you would hear on space invaders. The trick with this is it just seems to be timed and not randomly. Yes you can camp out on the flipper and wait for the alarm to show up and then aim for the stand of target for 50,000. That can be a lot on the scan but the shot is also a dangerous one. It might be good for a clutch win, but I don’t see it as a long-term viable strategy for big points. That, and... it’s boring. The hurry up from the spinner is a better idea and is implemented fairly well.

More than anything else this game feels like it took bits and parts of other successful games and tried to make them work together. If the scoring was better balanced it might. And while someone may have physically modified this game to not score on certain shots for tourneys, just playing the game layout itself is fun. The bouncing outlane rubber to an insane save is always fun when the game demands skill to get the ball back into play.

Viking is a strange pinball game layout and rule set. Would some people call this approach lazy? I guess they could, but pinball designers have a bag of tricks. Jim Patla has a pretty deep bag of tricks. I see elements of Mata Hari, playboy and Centaur on this game layout. Those are all awesome pinball games. This game has all the makings of things that make a pinball design sing, but it just doesn’t seem to come together. At least not as successfully as other Bally designs from this era.

Another absolutely beautiful machine by Bally in the classic era. While I don't own this machine in working order, have had a chance to play a friends machine often enough to say that this is one of the greats and greatly under rated. A well tuned and polished machine is key and the inline drops and center saucer/spinner is a familiar Bally design of the time. Very low production numbers for the time frame mean this game is hard to find never mind in great condition. Sounds in person are very good for the time and are kinds of a mix of Silverball mania and Space Invaders...If you are a classic Bally fan, don't know how you could not enjoy this machine. Kevin O'Connor is one talented artist and really shines on this table.
8.230/10
8 years ago
DMG

An almost forgotten Bally game from 1980, which is a real shame as I think this is one of their best. Some very interesting if not unique features on this game; the hurry up spinner, the 2 way kickout hole, the momentary 50,000 target, and the 1-2-3 sequential drop targets that yield a 10x bonus! If you get a chance to play one of this don't hesitate, I think you'll be very impressed!!