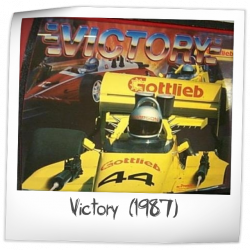 This is, in my opinion, one of the more underrated 80B games out there. The layout is very unique, and the gameplay is a lot like the later system 3 games where you are trying to complete a series of shots around the playfield in order to advance. Sure, it isn't one of the great Williams games, but for the money...Victory is a great value.

With its upbeat music, ample ramp and orbit shots, and the singular focus on hitting the checkpoint hurry-ups to finish the race, Victory is very good at representing its racing theme, and can be picked up in just a few minutes by learning the layout - a great quality for location play. And it's fun to rapid-fire hit those shots and loop around the track - a great pin for perfecting your shooting. The playfield is creative and does well at being a "space to explore" with some distinctive setups, and given a good setup, it's not quite so difficult to finish the race that a beginner would be intimidated out of repeated play. But once you get beyond all those upsides and that initial goal, the game's tires start going flat.

Every one of the secondary goals in this ruleset is a simple linear progression, with partial progress reset when you drain: multiplier advance, a ball lock, lighting the special - all the same thing, just with a different target bank or capture involved. And these other goals are not nearly as fun or smooth as running the race - in fact they're really kind of a grind if you try to do one deliberately - and yet they have enough value, especially the F-I-N-I-S-H multiplier advance, that you feel obligated to make an attempt. But if you do, then you can easily spend the next minute trying to knock down the same target bank, putting the ball into a lot of danger, with the consequence for failure being starting over. All of which will make you think, "silly me, maybe I should have just hit the next checkpoint instead of trying to do anything different or creative with my play."

And that's a problem when contrasted with the theme. The game is supposed to feel fast, and it is, in fact, pretty fast until you get deeper into it and try to explore - then it goes from race car to stubborn mule. Had the rules done something that integrated a little bit better with the checkpoint goals, kept the game moving around the playfield, and gave a stronger sense of immediate reward, it would be a much tighter experience, one of the best of the 80's - even without toys or a lower playfield.
8.137/10
1 year ago
DRL

Victory is a pretty cool game with a few interesting rules that makes it fairly unique and brings some strategy into play.

The music is great. I really enjoy the fact that it makes you focus on one shot and there is a timer involved. It has a different feel than a lot of games and I feel like I do a lot of dead flipping and ball control that seems somehow more natural on this pin.

Overall I am impressed with the game. It definitely keeps me engaged and sometimes I catch myself kind of dancing to the music while shooting those checkpoints.

QuietEarp has owned this game in the past.

Fun game the first couple time. But then gets boring fast.
The thing that most disappointed me about Victory was that it had no pop bumpers. Pinball Machines without Pop Bumpers are not my forte.
Other than that, still a cool lookin machine for the era.
7.136/10
2 years ago
DDK

Fun machine with a good set of rules.

Great bang for the buck. Nice playing game. Swap out the translite for something cooler and you're good to go.

MysticPinball has owned this game in the past.

This has to be my least favourite of the 80b gang, layout is quite nice and perhaps it actually has the most shots of them all but there's nothing worthwhile to do besides chase the next sequenced target or you're not going to score at all.

I dunno maybe that's terrific for a hardcore player but gosh it did not stay fun for me around the third game in and every other one of these i could play untill the cows come home from pasture, flaws and all.

There's a kick out hole ostensibly used to build up to an extra ball but imo that should have been the multiball lock, would have changed things up at least a bit even if like most of the other titles the multiball doesn't do anything in particular.

Cabinet is a nice bright red and meh as per usual, backglass is ok and there's not much going on with the playfield art unfortunately but it fits the theme.

Soundtrack is alright, like a racing game might have had at the time, no variation whatsoever though and it does have some voice calls but they're patently dull.

Can be had for cheap even in nigh flawless condition, it's not my kind of pinball but i know some people love the heck out of it so.
9.002/10
5 years ago
MPM

A lot of times I don't care if I have a high score, as long as I complete the race. A well maintained machine should offer many of hours of fun.

It plays smooth but its also kinda boring.

It lacks anything really spectacular, other than its catchy and upbeat music.

The objectives are boring, just keep making the checkpoints and hit the targets...

This gets repetitive after a few games...no multiball hurts but it would have been damn near impossible to implement with the ruleset. Very ready, aim, fire, type of game. Need to hit your shots in order or not too much scoring going round.
8.381/10
8 years ago
ZUL

Victory is very cool game that I would have walked by if not for the recommendation of a fellow player. This game is a shooters game and needs to be maintained properly or you will not get the benefit of the design as intended... Then again, this is pinball.

The Pros:
Shots from every aspect of the PF. The upper pf has 4 drops and 3 ramps to work with alone! Get through the race and feel a real sense of pinball accomplishment. Not your average Premier game. My favorite table from Trudeau other than CFTBL and the tragically underated Hollywood heat. My first pinball game was a Judge Dredd so I personally have a soft spot for JT's work. Spelling victory on the lower PF is all about how much bonus do you have in relation to risk/reward. Check point 4... Check point 5... Check point 6... Check point 7... FINISH LINE!

The Cons:
Premiere made some crummy translites, at least these race cars have spikes and machine guns on them. PF artwork is better, but still no match for the team at bally / williams. Hard to read the tiny blue scores. Would have loved to have seen this game with the third playfield as originally intended with the design. Another Gottleib triple level design?!? The first tri-level design since Haunted House?!? Ahhh, what could have been...

Takeway:
A very cool sniper's game that requires precision and accuracy (and strong flippers). Originally it had a lower pf in the center of the game as well. What would have it been like? Who knows... but a 3 level game would have been fantastic! There are some that do not like the difficulty of this table. I understand what it feels like to get owned over and over again by the same game. It's humbling. However when you get the flow of this deck, I believe it is completely worth the effort. I am glad to have taken my friend's recommendation and got to know this game. When you finish the race it feels like a victory, because you really earned it.

Wasn't a huge fan of this one. It was just so all over the place and crazy that I never felt like I knew what I was doing.
5.643/10
9 years ago
WCH

Overall, Victory is pretty much a ho hum game, even for the late '80's era in which it was introduced. Extremely linear game play. My brother-in-law owned one for many years and ultimately donated it to a charity auction. Don't ever buy one, regardless of how low the price may be. Dullsville.
6.827/10
10 years ago
BMF

I used to love Victory in the arcade. Good game for the time. Nice light show, decent sounds. Fun goal to win the race. And the upper playfield is fun. The display is horrible like all the Gottlieb's at that time. If you find one cheap give it a shot.

hawkeye11 has owned this game in the past.