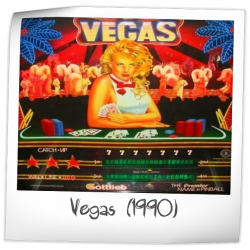 This game has received 15 approved Pinsider ratings. 15 more approved ratings are needed to get a rating and for it to be eligible for the Pinside Pinball Top 100 ranking.

Depsite owning it and having an unlimited opportunity to play it, I'm not entirely sure how I feel about Vegas. It executes some things very well, but always leaves you wanting a little more.

It's a very casual machine, meant to be fun, but it doesn't pose much of a challenge. On a positive note, there are tons of things to shoot at. You have drop targets, regular targets, a slot machine, cards to collect, a loop shot around the playfield, a saucer that awards a multitude of random awards, etc. The problem you're left with is wondering WHY you're shooting at these things. There's no real specific objective that must be accomplished to move on to the next. TONS to do, but no good reason to be doing it. Instead, the game is more like a meth addict running around a casino in a manic rage, playing everything, and leaving the table midgame to go play something else.

I should specify that this meth addict is a senior citizen, though, because although they're running all around the casino simultaneously playing every game, they don't do it FAST. Vegas plays at an OK pace, but you'll never get the anxiety that a really good and fast game can give you. In turn, it also doesn't give you the frustrations of BARELY missing a cliff-hanging task you were about to accomplish, but isn't that part of the fun of pinball? Think of leading the Physical Fitness program at a nursing home. That's about the level of adrenaline you'll get while playing this.

The sounds and lights are great, and the presentation itself creates excitement. You WANT to play a game of Vegas, and look forward to your game every time you start. The game is pretty easy at times, though, so 20 minutes later, you may be challenging yourself to find a way to drain the ball just so you can eventually get on with your life.

It's a lot of words just to say "I don't know". Maybe I like it? Maybe I don't? I seem to have a hard time getting rid if it, so we'll consider that a positive. There's just a certain charm about it.

Ultimately, I wish a little more time could have been spent developing this game, I understand the concept Gottlieb was trying to go with on these Street Series games, but if they would have just added a little more depth to it, this game could have been a real winner. And when you're going to Vegas, that's what you really want to do: win. I feel like I leave breaking even every single time.

Wish it would have stayed in Vegas.

Played this over the weekend at the Pinball Hall of Fame (in Vegas, coincidentally). I thought it was a pretty decent game. There wasn't anything really "unique" in this title, but it was a fun game to play for a bit. As you would expect, the shots/modes have to do with various Vegas games. The sounds and call outs were good - the usual bells/whistles you expect in Vegas, and of course the game chants "Vegas!" quite often.
6.767/10
4 years ago
STE

This game was designed to have dual ramps and an added level, but it is obvious that these were all taken out very late in the development process to save money. This is very sad, as this cost-cutting venture took away from us a game that could've been special. The color, artwork, and theme are all very good. The sounds on this game are very addicting and just enough to save this game: "You're hot! C'mon sevens! Wiiiinnnner!," as well as sirens, zonks, and other Vegas themed sounds.
8.189/10
8 years ago
MJT

Vegas is a very underrated game. Although my pin-head friends turn their nose up at it, the non pinball players gravitate to Vegas. Most pinball players find the easy shots & exploit them but it is much more fun to try & complete all the various tasks on the playfield. Pick one up on the cheap & enjoy it !!

I gave Vegas a few plays at the Rocky Mountain Pinall Showdown a few years ago. I haven't seen it since. One of the "Street Series" games from Gottleib.

The Pros:
A cool around the PF shot that can be a entertaining. Simple rules and a row of drop targets next to a row of standups all facing the same way. The left loop from the right flipper rips around the PF and makes you pay attention to your on the fly flipping.

The Cons:
Eeeety Beeety blue score displays are difficult to read against a bright pink BG. After a few games I walked away and didn't play it again for the weekend of the show.

The Takeaway: Vegas, a nice place to visit, but I wouldn't want to live there. A Jon Norris design that makes a few shots quite interesting. Rules were imbalanced, but unfortunately, this is not uncommon for Gottleib decks of this era. The electronic roto unit is an interesting application of an idea. Why couldn't Gottleib let go of of this idea? I mean it works, but it just seems a strange variant of an older technology.
4.849/10
9 years ago
904

I threw my 50 cents in like putting 50 cents on black and it landed on green, doh!!!
1
There are 8 ratings (that include a comment) on this game. Currently showing results page 1 of 1.