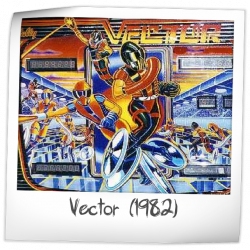 There are 18 ratings (that include a comment) on this game.
Currently showing results page 1 of 1.

VECTOR is a challenge and will hurt your feelings, but if you stick with it, Vector can make you a better player. I love the original concept and the layout is great, especially the last chance saucers on the outlines. Lighting is best when the room is dark.

I have owned this game for over a week now and I absolutely love it. I have learned the rule set and to accomplish success, it takes tremendous amounts of skill. This is not your typical game and some of the flow is a bit lacking however, there are numerous ways to earn points and it is a challenge. When I first started playing this, I drained the balls so quickly! Once I found the groove and learned the rules, I was able to fight for ever point. It took a while to sight in my shoots because the angles are deceiving and you have to fight against your instincts as to hit the ramps. This game is not for everyone and some will get irritated quickly however, I feel this line of Bally's with the unique game play and the odd rule set is what makes this game sustainable. I am looking for others like this and in this time era.

This is a cool looking game with lots of drop targets and an interesting ball lock feature. It's not fast, the art work is ok, the back glass is excellent. It's a middle of the road pin for me.

Phesson has owned this game in the past.

Wasnt my cup of tea,poor design,poor pf art,cool bg and cabinet.Upper pf is designed poorly and things are cramped which make things break.I really do like the concept with the vectoramp and drop target defenders just not executed that well imho
9.540/10
1 year ago
TKM

Super underrated game. I can only assume most haven't played it. Very fun!

Daditude has owned this game in the past.

Meh. Its ok. Under rated due to the gameplay mostly being in your face 90% of the time. It would have been nice to have a better flow. Beautiful pin.

chris_silver has owned this game in the past.

I played a lot of pins in my life. But this game is amazing. Quick, controlled fun. But you have to have the right settings to enjoy this special gameplay. This game is underrated.

Vector is one of those games that really keeps you saying just onemore game! Its fun! The layout is inyeresting as all get out. The ramps facing everywhich way is cool. And i love the drop targets blocking the left ramp. Protection drops are always a fun gameplay dynamic for me. The game does have a few irritations fir me regarding stuck balls. The ball gets stuck onthose very drops i like. Also stuck alot on the upper playfield ontop of the plastics. All in all a great game and one i would love to own

DanTheGlassMan has this game on the wishlist.

Vector is a beautiful and seriously underrated game. The best lighting of any early Bally SS game ? - quite possibly. It is not a Fathom, but the art was produced by the same artist and the game
designed to compete with the growing threat of video games. Bally threw everything they had at this game so it has a myriad of extra features, sounds, solenoids and lighting.

It is rammed full of features (9 drops - 6 of these with individual controls, 2 outlane saucers, double backglass, most speech of any game of this era, in playfield plasma display, ramp shot speed detector, 2 or 3 ball multi balls, 4 flippers, 3 ramps, pop bumper ..)

But this makes the playfield cramped, you need accurate shots and quick reactions to play this game. It is CRITICAL that Vector is set up and working properly and that you have pinball skills to play it. Nudging skills are vital on this game as both outlanes have saucers to save you. A well sorted example is a delight to play, but a tired example will be rubbish. It rewards you for hitting drop targets and stand up targets in order. You will both lock balls and release multiballs far more quickly if you shoot accurately. The speech and call outs beat anything of this SS era.

Most Vectors you will see are not set up properly and were hammered in the field. The crowded playfield would take a pounding from over-powered flippers leading to air shots from 3 of the 4 flippers.

I bought my game as a tired example. Like many reviewers I initially thought the game was rubbish. But now I have tuned everything properly. This was just adjusting what was there - refurbing the linear flippers and slingshot assembles, adjusting EOS switches to set sensible flipper power, replaced rubbers, set leaf spring gaps, put correct sized rubbers on the critical posts next to the outlane saucers ..... it has completely transformed this game.

If you are a decent player with some nudging skills and you get to play a well maintained Vector, you will be very pleasantly surprised.

DRD edited previous rating on April 15, 2015.
DRD has owned this game in the past.

I am pleasantly surprised by Vector. I never played one prior to owning it, it is a really cool game. Looks amazing especially with the double backglass, chrome ramps, great art on the playfield and plastics. It's a unique original game that is loaded with features. A must have for any early 80s bally enthusiast.

newtoit has owned this game in the past.

Great early Bally Solid State. lots of potential mulitball action and I love the "defending" drop target for the ramp. Outlanes provide for some great nuding as you try and reach the bonus holes.

Vector is a cool concept for a game. This game looks like a really cool deck, but it does not make the cut for playability.

The Pros:
An amazing layered and colorful futuristic BG. The drop targets in front of the left ramp make things interesting. So... how fast can you get that ball up that ramp? Creative inlane/outlane design with the saucer on the right require solid nudging and anticipation skills

The Cons:
The PF does not meet the artistic merits of the BG. Maybe Greg spent all his time on the BG. Your game must be tip-top to really play as it should. Strong flippers are an absolute necessity. Even then, it becomes a single shot game. Multiball does not last long... all that work and it's gone in a moment.

The Takeaway:
The Addams Family makes an appearance on one of the plastics by the upper pf. Maybe this game was more futuristic than it lets on...
7.312/10
8 years ago
ZEN

Blast to play, ahead of its time, bang for your buck is great on this pin, i knock the poor lighting in the mirrored backbox, not bright enough to really make this thing pop. Timing shot is really innovative.. I have owned one and I may own another...

ZEN has owned this game in the past.

Gorgeous back glass on this game can't make up for the terrible layout. Too much clutter for me.

swampfire has owned this game in the past.

A very average game from this era.

A machine with quite a crowded playfield for an early eighties Bally. A lot of drop targets to knock down, but only one pop bumper, and it's quite talkative for it's time. Paradoxically quite a complex ruleset, but not actually that much to do on this one, get those defender targets down and shoot the ball up the left ramp as fast as possible to score big points, as the speed of the ball on the ramp is timed. A mediocre multiball is obtained by locking balls in "Energy Storage" saucers and releasing them either by locking all three, or by hitting the H Y P E targets in sequence which will release an extra ball. In fact hitting the targets in the right order is the secret to progressing well in this game. This game is a nudgers delight, as you can nudge the machine to guide the ball into a saucer as it goes down either outlane, which will not only return the ball to the flippers, but will score bonus points too.
A constant droning background soundtrack as you play, with a chasing light display in the backbox. Not a bad machine, but not Top 100 material. It feels as if it is trying too hard...

real fun and changeling game from the 80s but also very under rated!

Magneto has owned this game in the past.

1
There are 18 ratings (that include a comment) on this game. Currently showing results page 1 of 1.