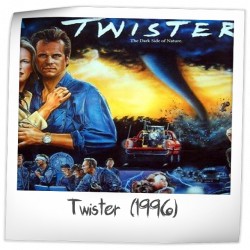 There are 33 ratings (that include a comment) on this game.
Currently showing results page 1 of 2.

The best pinball machine ever made. I had 20 machines. Unfortunatelly had to sell 10. I sold my indiana jones, elvira, tales from arabian nights but i will never sell my twister. Very underrated game.

This is a great playing and fun game. When ever I see one I played it. The twister magnet multi ball is epic. Must be why burg used in X-men and TMNT.
6.400/10
9 months ago
NPS

Good game that is simple to play for most anyone. Pin enthusiasts will grow bored after while, but great game for your collection. Terrific classic movie!

This is an under-rated machine. Sure, it isn't very hard. And it can get repetitive fairly quickly. But it is a lot of fun and those not playing pinball on a daily basis will enjoy the theme, presentation and execution. I would recommend this for someone looking for a 'family' machine in the 'reasonable' price range this is usually listed for.

OK I used to want to be a hurricane hunter and I love weather and storms so theres built in stuff there, but this is a fun game. I didn't hesitate when I got to own it. The call outs get repetitive which is a turn off for alot of people. I like the multiballs though and the disc is cool. Its not the easiest to keep running and to get parts for, but it a game I'm glad to have, but I can respect its draw backs. RIP Bill Paxton.
6.186/10
2 years ago
MLP

"Twister" is a game of ramps and orbits. You basically climb up the tornado scale and grab multiball. It's simple enough. Almost too simple. And the points system is basically along the lines of "Attack From Mars" where you can score 3 billion points with your eyes closed. I am a sucker for presentation so the wind and the lightning and multiball callout (Bill Paxton yelling "WE'RE GOING IN!!!") is so awesome. However, the game feels repetitious and once you play it and master it, you might just walk away from it and never come back. Still, this might be SEGA's best pin.
3.581/10
2 years ago
RFK

Ok, so played it at Expo 2010, played a couple great games, went out and found another one to buy. Shopped it, played a few rounds, hated it. Couldn’t believe how bad it was after about 5 games. There are clear deflectors all over this game to prevent the ball from getting stuck on top of plastics, ramps, etc. What a pile. $10,000,000 points for pulling the plunger? Really? The spinner is cool, but after it is done throwing 5 balls all over and you smack them against the glass, you wonder did someone forget how to design a game where the balls stay near the playfield? Were there hidden ramps under the playfield? I couldn’t believe that there were not reports of owners smashing the glass during gameplay with how often the ball strikes the glass. I let this one go after about 2 weeks. Put maybe 40 plays on it, don’t miss it.

This is my first purchase of a pinball machine and I will never sell it. I remember playing this machine at the local bowling alley. Being from Kansas this machine was right at home. The movie left a little to be desired and it carried into the machine.

The layout is good but I wish they had found a way to sneak one more ramp shot into the mix. As for toys and gimmicks this one hits the spot. Magnadisc, all the unpredictability of the discs in Whirlwind or "The power" in Adams family, and add in the magnets of golden eye and this gimmick sticks the landing. Multiballs that start by feeding you a ball every once in while move out of the way, this one magnetizes all of the balls spins them around and then releases them in a fury.


All of the artwork on this machine leaves a bit to be desired. It suffers from the powers that be, i e movie producers trying to ram the characters of the movie down your throat when they should have focused more on the actual star of the show, the tornado. I think that the back glass suffers the most from this. The cabinet artwork doesn't suffer from this but the colors just don't hit the mark.

The sound is ok and the sayings are from the movie.

This is another game that even as a young man I found the lighting a little low. But with the LEDs this game comes to life. They are in my opinion a must.

But as I said from the beginning it was fun in 1996, and is still fun in 2019 and it will never leave my collection.

Game suffers on theme and art but this is a GREAT theme integration. Sort of like Baywatch...fantastic THEME INTEGRATION, not so great theme. I love the multiball start, that just never gets old with the spinning disc and magnet. Pretty simple game but when its playing well and working 100% its a super fast fun game! I would buy this one again if a deal came across my radar. One of the pins I miss playing the most that I have owned...I don't miss LOOKING AT IT (pretty bad translight - is there an alternate?) but its a really fun game.

Biggest complaint is the flakey ball lock trough in the canister. That roll over switch mat thing was a terrible concept that barely works and is expensive to replace. They should have just used a standard trough with actual microswitches. That trough can be a maintenance headache for sure.

Dkjimbo has owned this game in the past.

this is a good game. Its to bad it wasn't made by B/W. feel and quality isn't there. I personal like the game play.

Twister is a fun game o really love the artwork on the game, I like the sounds and music, and the spinning disc magnet grabbing the balls are awesome. The topper is also great on the game with the fan.

Had this in my basement through middle school and early high school. Played countless hours and its what started my love for pinball.

Not a bad game. My mind was more or less blown when the first time I saw the multiball stacked on the spinning disc...good stuff.

The backglass likeness on Paxton is fairly horrid and hearing "Everybody underground NOW!" gets old after the hundredth time but all in all a fun pin.
8.540/10
4 years ago
???

the game is good because of the highscores you can get in it..very high numbers
7.715/10
5 years ago
GIL

Considering the ranking, this pin was a big surprise. The table design is a very good with great flow and a ramp to rival Tales of the Arabian Nights, only not as easy to hit it and a lot more difficult to hit on the return given that the ball is dropped right ON the flipper. Possibly the coolest (and trickiest) skill shot in pinball at the spinner/magnet. Best of all is the twister multiball utilizing the spinner/magnet to awesome effect. Even better is the multiball is progressive which more than makes up for the relative ease it is to achieve that particular multiball.
7.198/10
5 years ago
AMK

Good layout, great game for the price, callouts get annoying

i sought this one out as i remembered playing it in cinema lobby back in the 90s, and i remembered the spinning magnet.

so i tracked one down and brought it home. unfortunately i found the Helen Hunt speech call-out "are you ok?" to be *so* annoying and irritating that i just had to turn it off and get rid of it asap, even at a loss. if she was my wife, i'd chop her up with an axe and bury her in a deep hole, just so she couldn't talk.

shame. the rest of the game seemed ok, but FFS Helen just SHUT UP already

cooldan has owned this game in the past.

Pros:
- Cow multiball is tolerable, plus the orbits required to activate it are pretty fun and fast shots.
- "Oh no! You've missed your triple jackpot!"
- Spinner with magnet is a cool feature. It was nice to see it again in X-Men.

Cons:
- EVERYBODY UNDERGROUND NOW! God that quote is annoying, you'd be better off actually hiding underground then listening to this quote 100 times.
- Spinner barely ever works on location.
- Same old SEGA rules.
7.280/10
6 years ago
QNT

probably one of the best if not the best Sega title IMO ....... Yes its a multiball fest but its just too much fun not to enjoy it , the spinning disc start to mutltiball is spectacular to behold , cool music the "everybody underground" call out gets old & its damn near impossible to find plastics for it but a great game overall

TecumsehPlissken has owned this game in the past.

I love the movie and the pin too. The magnets and tornado disc are really cool, and I like the ramp as well. Good fun game without having to do much thinking. Just play and enjoy.

Next12
There are 33 ratings (that include a comment) on this game. Currently showing results page 1 of 2.