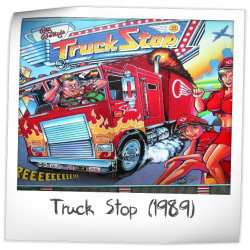 This game has received 12 approved Pinsider ratings. 13 more approved ratings are needed to get a rating and for it to be eligible for the Pinside Pinball Top 100 ranking.

Pretty ok game for its age. Its too simple and I think you get tired of it too fast. The game is really nice to look at thou.

What do you get when you mix the relatively one-dimensional nature of late Bally 6803 games with the charm of a Williams System 11?  You get Truck Stop.  Designed in the Bally factory, and polished in the Williams facility after Williams bought out the Bally pinball division, the game plays like the orphan that it is.  I played the game at the Allentown show years back and I rolled it, nearly twice.  I'm not a good player, and this was my first time playing the game.  So, I'll say the game is a tad simple to master, however very easy to learn for new players.  Riding the ramps is fun, and flippers need to be in top-notch shape to ride the long ramps.  In-line drop targets on a System 11 is a rarity, and neat to see--especially out in the open like these are.  Art and sounds are typical top-notch from Williams. Speech can get a little repetitive and obnoxious.  History says the design was saved from the Bally scrap pile and the Williams “pizazz” was added for release, and that certainly looks to be the case.  If nothing else, these early Bally games from the Williams factory were unique and had a certain flair about them…even if they were a little shallow, simple and repetitive.
7.404/10
6 years ago
JIM

this is a fun game, doesn't get a lot of respect but, definitely a keeper for me.

I just checked this out yesterday, a dude on craigslist has it for sale, poor him that he paid too much, I felt not bad but would like others to check it out once, so I added an ad on here with a link to his craigslist. He wants twice what he should, he won't get his money back that he has in it. Back to the game, good back glass, nice layout, but the 2 different sets of flippers with the weak ones up top doesn't help. Good sounds like horns and speech. Neat layout up top and ok ramps, look the history up on this game, it could have been good...
6.564/10
12 years ago
RVM

Being from the dot matrix age myself, although enjoying games like Earthshaker as well, it was quite hard for me to like Truck Stop. Admittedly, the game's artwork looks great in that wonderful "late nineties" Bally kind of way but the layout is way to symmetrical for my taste. The flow is hard to be found, and I could only play one, maybe two games before losing my interest. The soundtrack is great though, and so are some of the quotes. And a great looker, but that's really all she is.
1
There are 5 ratings (that include a comment) on this game. Currently showing results page 1 of 1.