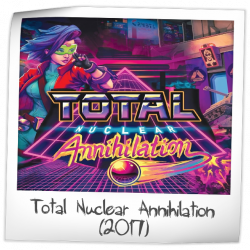 There are 181 ratings (that include a comment) on this game.
Currently showing results page 5 of 8.

Awesome sound, some of the best I have heard. No ramps make for a unique experience. Reminds me of an updated version of scorpion.
9.600/10
3 years ago
AJ

Really neat machine. Looks like a pretty plain layout at first but actually carries quite a few surprises with it.
9.840/10
3 years ago
MCM

This game had me at jump. As someone who grew up in the early days of SS, this game nails it. If you enjoy High Speed and games of that Williams era you will LOVE TNA. Fast, deadly, the sounds, music and call outs nail it. A few innovate features here and there (ball locks, CoOp) but the true glory of this game is the simple, fun, challenging layout. Scott has proven you don't need ramps and toys and other gimmicks to make a great game. Did I mention fast? Everything about this game requires your undivided attention or it's drain city. From the flipper plunges to the scoop, the balls will be flying fast and furious. I get why it's not for everyone. Younger players and those with ADD used to jumping ghosts and bluetooth will claim it's too simple. Less skilled players will get sick of watching the ball drain over and over, but make no mistake, there is plenty here to see and do and more than enough challenge for even the most hardened player. Kudos to Spooky for bringing back the lost art of fast, fun, crazy pinball with instructions that actually fit on the instruction card.

EDIT : So I purchased and finally got a TNA. Living with this game has confirmed everything I said before. It's #1 with a bullet. So simple, so difficult, so frustrating and yet so ridiculously rewarding and fun. If you don't get this game you don't love pinball, period. It's pinball in it's purest form.

middaleman edited previous rating on May 30, 2019.

I played a few games on this machine at Pintastic. What a cool concept! It wasn't intimidating to walk up to and play like some of its more complex (yet awesome in their own right) contemporaries. The sort-of reverse drop-target ball locks were very cool and rewarding to hit. Nailing a nice loop shot and banging it around in the upper playfield was also satisfying. I might have blown one reactor, and if not for a line of people patiently waiting behind me, I would have likely been glued to this thing for a while. It might be a kind of "one trick pony" type table, but that was a trick I wouldn't mind more uninterrupted time with.
7.204/10
3 years ago
DD

Pretty good pin. Seems kinda basic to me without ramps, and overly repetitive. Music is catchy and it is fun.... just not enough for my liking.
9.840/10
3 years ago
AQU

One of the funnest games I've ever played.... especially group play.

Aqua1122 has this game on the wishlist.

Fun pin, i think it could become repetitive in a home environment. Great pin for a friendly competition.
7.045/10
3 years ago
BAT

I like the concept of TNA but after a while it is too much wash repeat play to last. Fun to play here and there but no a keeper
7.971/10
3 years ago
TOM

After a very long wait, I finally have this game in my collection. I was only able to put a few (20-ish) plays on one on location. That game must have been set at 6.0 degrees because it felt slow and the sound was so low I had to stand next to the speaker to hear the music. Now that I have it at home, level at 6.5 degrees with default volume...WOW! This game is so much fun. More than I expected. It's fast, challenging, and keeps me re-starting. Best shaker integration of any game I've ever played. Best music integration as well. It's just the little things that draw you in deeper. I like the theme as and art as a throwback to the '80's. It's just beautiful. My family loves the co-op and vs modes. I can see my kids and their friends battling on this for a long time. The rules are simple on the surface, but provide enough nuance to make it really challenging. Relighting your locks is not as easy as you think, especially when every shot seems dangerous on this machine. This is pure '80's throwback pinball with modern flair. It's exactly what I was hoping it would be and more. Thanks Scott and Charlie for creating and manufacturing this masterpiece. It is truly a special game.

Crile1 edited previous rating on July 23, 2018.
Crile1 has owned this game in the past.

My favorite new game in recent years. Wow! What can be said about this game that hasn’t already been said, not much! The immersion into this game and “world under glass” is only surpassed by the high intensity game play and best music in pinball history. Love the light show as well.

One of worst games ever played

TNA is a fine game, and there's nothing really wrong with it. The sound is amazing, but the overall game play feels to me like it would get old kind of quickly.
8.385/10
3 years ago
KAR

* I have played more of this pin, and have subsequently lowered my initial higher rating I had provided. After many more games out in the wild, I still absolutely love the sound package and theme, but the game play isn't quite "there" for me like I had thought. I would still own this pin, but man, I don't know if it would have the lastability for me.

For a simple play field and limited number of shots it really draws you in with timed hurry ups and the awesome bass drop sounds.
8.524/10
3 years ago
KBG

Finally managed to play this a dozen or times and it's a blast. The lighting and sound quality really add to the experience. Probably not the best game for a small collection but I definitely want one.
6.696/10
3 years ago
B16

Really was expecting to like this one more due to all the hype. It was just OK for me, this one got old fast and I lost interest. Looks to be more fun with multiple players, as you can steal locked balls. Trying to stack up the balls to get multiball going, then hitting those shots again for the jackpot was exciting at first but became repetitive. The upper play field is too big and could have been better utilized, imo, as it really just gets in the way and the shots are nothing special. Try TNA if you find one, as most people like this much more than I do. For sure try one before you buy.

Simple rules and addictive to play, like the pinball equivalent of Tetris. The music and lights are top notch. I expect to own a used one someday. If I could change one thing, I wish the video graphics were as colorful as the backglass and cabinet.

I think for mortal players, a mini wizard mode at reactor 3 and 6 would have been cool.

Is there a better game that excels in combining music, lighting, lastability & flat out fun??? I think not. The gameplay is brutal & keeps you coming back for more. If you want to become a better player, keep hitting that start button.

TNA is a breath of fresh air to the pinball industry. Classic Bally 80's design with today's modern tech. For me, it's a match made in heaven. I hope more game like TNA come to market in the coming years. Co-op mode just takes the game to another level of enjoyment.

Holy crap. This game is awesome. It's hard, fast, loud, flashy, and you don't need a PhD to understand what's happening in the game at any given time. Maybe this game has a deeper underbelly, but 30 minutes playing this game without reading the rules card and you pretty much know exactly what's going on at any point in the game. There's no selecting characters, mashing buttons, or reading little signs above inserts full of text. There aren't 10 modes shooting different colored flashing shots to get different movie clips. No mini playfields, no waiting for balls from scoops, no saucers, no freaking brakes man.

There's so much satisfaction in this game. Destroying a reactor feels so good. Heck, even just having a reactor go critical feels like something important just happened, when it's just a ball bouncing around the upper playfield. Every every ball lock is so mechanically satisfying. Blowing reactors is like the getting a big super jackpot in any other game, except it happens all the time in this game.

If I have anything minutely bad to say about it, the playfield art isn't mind blowing or anything, but it doesn't look cheap. I've had a few times the slingshots airballed the ball directly into the outlane. While the light show is great, I don't think it's on par with a visual spectacles like JJP games like others have said. There's kind of nothing at the top of the game, but not being loaded with "stuff" is kind of the reason this game is great. I'm stretching for bad things to say about this game. Nothing about it is bad.

What a great game! Currently my favorite game to play on location and (so far) the only NIB pinball that I would ever consider purchasing. Really hoping that we see some more games like this in the future. Scott Danesi is Awesome!

Just not my game. I know many many people love this game. Maybe I am just not a good enough player or need to own one to get it. The music although very well done is nothing I would ever listen to.

PreviousNext12345678
There are 181 ratings (that include a comment) on this game. Currently showing results page 5 of 8.