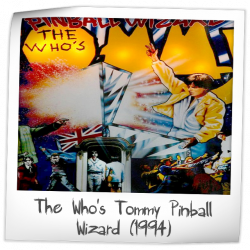 There are 112 ratings (that include a comment) on this game.
Currently showing results page 3 of 5.

So it's based on the rock opera and it's not The Who performing, but hey - where else can you play pinball to pinball wizard? The shots are varied - there are 12 modes - all with there own songs, a couple of skill shots that actually require skill, and a crazy 6 ball multi ball (as well as two others) Stereo sound as well. All this and code written by the great Lyman Sheets. I don't think enough can be said about the lighting either - The GI is excellent for a machine of this era, and try counting the number of flashers. LED it and watch it pop. Really like the playfield and back glass artwork. The blinders have to be one of the most clever toys in pinball. If this was The Who and had a B/W badge on it - it may be a higher up the ranks.

The one major neg for me is the cabinet artwork. Very bland, and often worn - then touched up incorrectly around the flipper buttons.

The_Fonz has owned this game in the past.

I like that british 'jackpot' callout. Pop a pinsound in this game and boom!

Kneissl edited previous rating on September 06, 2015.
Kneissl has owned this game in the past.

The one I had was stiff to say the least. Every shot is like hitting a brick wall. Very punishing and a drainer. You never feel connected with this game, but I think it really boils down to taste though. The modes can mostly be ignored. The shots are difficult and this is not a pin for an average player. I'm sure pro's love it as it is an extremely challenging and punishing pin. Great multi-ball. I've had some fun playing it, but I'm not going to be too sad to see it go.

erok has owned this game in the past.

I absolutely love everything about this game, helps to be a big fan of the theme. The music is great, love the shots in which some are easy and some challenging. The modes are fun with a variety to each. Love the artwork as well, even if it isn't everyone's cup of tea. The only real negative thing I can say is that getting multi-ball is rather easy. Just incredibly fun overall. The best DE has ever put out.

the music is what got me hooked!

Fun game, multiball is wild! I had some fun on this one, I am not a fan of the theme but that didn't detract from the gameplay. A must play if you see it anywhere.

Great gameplay and a solid machine, if you only get one machine for your house it kinda has to be Pinball Wizard doesn't it?

Blinders and mirror are cool toys.

pinballrebel has owned this game in the past.

I expected something tied in to the "Who". Backglass a huge disappointment and music equally weak.

wish music was not showtunes, but the who themselves, however the machine is still fun to play and challenging.
7.831/10
8 years ago
ERC

A great game with great sounds and music. The blinders are ace too.

Easily my favorite Data East pin, but tied with JP. Binders are awesome, music is great, there's a good reason why many say this is one of the best.
8.747/10
8 years ago
ROB

I have always wanted TOMMY, Excellent theme and music. Fun is the name of the game.

RobKnapp edited previous rating on January 12, 2015.
RobKnapp has this game on the wishlist.

great pin the Tommy theme is cool but it sucks that its based on the broadway play. Its very fun very addictive love it one of my favorites.

fish4pins edited previous rating on June 01, 2013.
fish4pins has owned this game in the past.

I got to play this game finally, it had good flow, and some very satisfying shots. For the right price I would own it.
8.267/10
8 years ago
MSL

Excellent execution of the theme. Blinders are fitting gimmick and there are many great songs on the soundtrack (I didn't mind they weren't performed by The Who). Best DMD animations (granted maybe the weirdest also) I've seen in any machine. Many modes (some pretty useless though) and really tough but satisfying jackpot hit on the upper right ramp. I always get best points from video mode if I don't try to play it :-)

This is a classic pinball that will never get old and belongs in any collection. They didn't make a ton of them so finding a nice one is not easy. Prices should go up on these long term.

It is a FUN game, AWESOME music and highly collectible.

I miss playing this. Adifficult, but rewarding game that I remember not ejoying initially, you have to give it a chance the multiball on this pin is insane!
7.942/10
8 years ago
OMO

Excellent theme and music, interesting and challenging modes, decent wizard mode. Blinders are a fun toy. Still somehow a generic DE game having modes+wizard mode and a separate multiball. Anyway the best DE game there is.

Tommy is one of those games from DE that they gave quite a bit of love to and it shows. It's one of their best. But it still ranks as an average B/W game. I know some solid pin players who absolutely love it though.

The Pros:
A good PF layout and solid multiball rules with multiple stages to complete for big points. The everall gameplay is solid. I'd give this game a lower score if it wasn't for the Tommy blinders. That idea is just too cool and it's implemented really well. Think you can play pin? Start a game in Tommy mode. A great translation of the theme. The mirrorball topper with your and the game's reflection in it is great too.

The Cons:
The VUK on the right (sucker shot from the left flipper) kicks the ball out quite a bit when hit. DE games have a clunky feel to it. The game has to be maintained properly or it just is not any fun. Lots of modes, and some of them just seem to be filler. The video mode is a complete snoozer. Artwork is detailed, but still looks muddy. Would have liked to have tried the 6 bumper proto game.

The Takeaway:
A good game from a company that normally does not make them. DE's best game other than TFtC.

Update: I'm starting to get to know this game better. I think that the more I play it... the more I like it. This is a good sign. TftC is still DE's best table, but this is a fun game too. What is it with DE's good games having walls that drop on the PF? While checking out reviews on flippers.be their review of this game the observation was made that the layout is based on Addams Family (again, as compared to JP) flipped/mirrored left to right. Other than the placement of the pops, the lanes, ramps and holes in the PF are very similar. Well if you're going to steal... steal from the best. I think DE should have given Pat Lawlor some money if not some credit for their best designed games other than TFTC.

Update:
This game's ruleset is better than I gave it credit for. Other than a few useless modes (and tAF and TZ don't have a few useless modes?) this game really makes the most of a dangerous layout. Getting to TOMMY wizard mode is truly worth it. The more I play it, the more I like it. I may have to find one and put it next to my TftC.

I played this a few times at the local arcade and can't say that I really enjoyed it. Then I joined a pinball league and this game was selected which forced me to practice on it and learn more about it. I was surprised by the depth and features that Tommy offers and found the game play enjoyable especially the multiball. What I didn't like about it was the sound and music package. I'm not familiar with Tommy the album except for the hits played on the radio but I found the callouts and the voice used for the songs to be really annoying and grating after a short time. It has the lower quality DE music and sound which doesn't help anything either. Anyways a great game if you can handle the music,sound and unappealing artwork.

PreviousNext12345
There are 112 ratings (that include a comment) on this game. Currently showing results page 3 of 5.