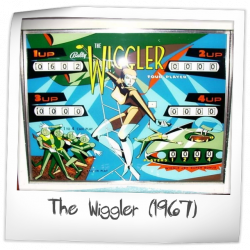 This game is an absolute blast to play and hard as hell. The out lanes are brutal and this game really makes you think about when you need to hit the machine to make the ball avoid those out lanes. The layout of the game makes you think ahead a few shots and the zipper flippers add a dynamic that is not found on many EM machines. The zipper flipper along with the 3 ball multi ball make this game one of the top EM games that I have played.

Wanted a classic EM to round out the collection and was really happy when I had an opportunity to purchase.

I’ve played a good amount of EM’s and can say I really appreciate the innovation in this one in accordance to the ERA. Zippers, Gates, Layout, Flashers, and even a Multi-ball!

Artwork / theme is a step back in time and allows your mind to plot an interesting storyline. I really enjoy the unique look / feel of the backglass and playfield w/ cabinet art relatively standard to period.

The classics are always a challenge and all skills to include nudging are essential.
8.771/10
2 years ago
BIL

Zipper flippers, 3 ball multi-ball, right side gate and Wiggle Alley, there's a lot to like in the Wiggler. It's the artwork that's the most intriguing though. Quite attractive for one of the pointy people backglasses. How the name "The Wiggler" inspired that art is the most baffling part.

Well ist a 60s game, with a 60s style with Zipper flippers and a 3 ball multiball.
It`s a great Feeling, having a the zipperflippers closed while your in multiball, the funfactor is huge in this game

Drain monster! For me, this is one of the most challenging EMs out there. Your nudging skills will be tested. Great gane with awesone artwork. Play at yiur own risk...and sanity.
7.968/10
4 years ago
SDJ

The first game I ever bought. Basic rules, but suprisingly difficult to master. Skill shot may be repeatable off the lower center bumper and Wiggle Alley can be big points as well. The zipper flippers and multiball just add to the fun. If you’re playing for Wiggle Jet Super Bonus on your dollar games, your strategy changes. A fun game that really keeps you coming back for more.....

In comparison to many of the other Ted Zale "zipper flipper" designs from 1966-1973, this game is average. Yes, it has multiball, but the playfield layout and artwork is just not as aspired as other titles, especially *really* hard to find ones. You cannot judge this game well, unless you have played many of his titles side by side. Capersville as an earlier game has a superior ruleset. Many features such as gating, buttons, and bonuses were better integrated with later games such as Dixieland, Dogies, Four Million BC, and Nip-It and all have better gameplay value. I speak from experience as I presently own 13 of the total of 19 zipper flipper games that Ted Zale designed during his decade in pinball, including "The Wiggler".
9.374/10
5 years ago
B13

fun, fast multi ball. Love the color and the game just looks cool. Fun to play and not easy to beat. a keeper

First played this at a friends house and was surprised at what Bally packed into this EM. Four player EM so the head is heavy. Worth the weight! This game not only has up to three ball multiball (in 1967!!!), but also keeps track of multiballs for each player. Wigglesville shot during MB is great reward and the layout is just fun. Don't forget the zipper-flippers on this and the game just rocks. Only dig I would have would be on the pointy people art of the machine but it still fits the theme and doesn't really detract. My original backglass was shot but the BG Resto repro I got looks just fantastic. Currently repainting my cab and trying to clean the innards of my game that look like they spent their life under the hood of a Dodge Charger since the 70s. Can't wait to get it back together for one of my favorite EMs!

shimoda has owned this game in the past.

Backglass is very nice it has the blinking lamps effect on the women edges very cool for 1967 era, I found hard this game after 3 years of digging I still have to repaint the cabinet into the original design . Wiggler deserves a better place in ranking closer to Cappersvile

Can be a real ball drainer, specially the left outlane with no scoring!
Multiball can be quite easy, as well as losing the balls in a split second.
Sometimes a real high scorer, not easy to roll it over though.
Some nice interlock features, the blue bumpers doesn't close the flippers if the release balls light is on, when the flippers are closed the open gate closes also.
Multiball closes the Wiggle alley, shooting a ball into the Wiggle alley opens the flipper etc.

wizardblom has owned this game in the past.

The Wiggler is a Ted Zale game that completely took me by surprise. This is a good thing because playing this and gave me a great deal of respect for this (I believe) un-heralded pinball designer.

The Pros:
The art package is pure pointy people brilliance. Most people will credit this to Christian Marche, but in this case it is the unsung Jerry Kelley doing the honors. Looking about on IPDB.org, it looks like Jerry may have utilized this art style before Christian did! Got to do more research... Now, I know there are many people who do not like this artistic style. From the point of vie of a commercial artist, working with paper cutouts (i believe) to make a quickly produced instantly recognizable piece of work that says "Pinball". A great technique to make the artwork for pinball games and not hold up the production pipeline. The playfield layout is incredibly deceptive in its simplicity. This game plays great when freshly rubbered and waxed. The multiball is a real treat and when the zipper flippers are closed with more than 1 ball on the PF, you are the king of this table. Multiball advances the wiggler value and the left lane "wiggles" the ball down the pf and out towards the flippers.

The Cons:
Hard to find in good shape. The left side of the PF is f'n DEADLY!

The Takeaway:
This game does not seem to be well known and that's a damn shame because this is damn fine game. As far as it's place in pinball, for me, this table comes in closely behind some of Ted Zale's best known designs like FireBall, 4 Million B.C. and the incomparable StarJet.