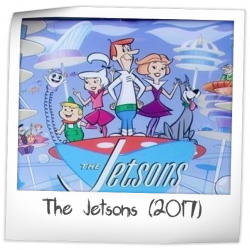 This game has received 23 approved Pinsider ratings. 2 more approved ratings are needed to get a rating and for it to be eligible for the Pinside Pinball Top 100 ranking.

very much underrated game. i think people don't understand the spirit of this game. quite easy to understand, still small surprises in every game. pinball pure.
spooky rules!!!
6.183/10
8 months ago
DAD

This game makes me sad. I loved the Jetsons, this could have been an amazing pin--but it isnt. Had Stern or JJP hooked this up it would have been full of loops, toys, and deep with rules. The field on this is baron, not enough substance. A great example of a pin that could have been great.
8.200/10
11 months ago
SCC

Surprisingly way more fun than I expected.
The game shoots well and is simple yet not too easy to progress through.
If you find one give it a chance.
6.646/10
3 years ago
DWG

This game was designed for customers with small children in their home and at the time, the only titles available were Metallica, Walking Dead, etc. It was also designed for easy serviceability and reliability. A lot of these games suffer from the Elroy shot as the tight loop guide was not bent/formed correctly which caused the shot to be clunky instead of a fast tight return shot to the flippers. Lastly, the ultimate goal of the game is to the EEP-OPP-ORK-AH-AH multiball which is started by collecting the other 2 multiballs. The music and "hype" effect of the wizard mode is worth at least getting to once on this game. Game definitely needs callouts - who knows - perhaps new code will come int he future that adds them!

Love spooky pinball but I just got this game today plastics look super cheap can see all the print grain also the leds are horrible single leds no color variations first thing I did was replaced all the leds. The artwork is awesome as far as details. The sound quality is good but game can get somewhat boring with just jetsons sound effects playing over and over. I feel it really needs a sound update. The game play is actually not bad its kind of a beginners game but somewhat enjoyable. This game overall is ok but defiantly not the pin if you only have one in your collection.
6.532/10
3 years ago
LRP

Somewhat generic rules, but it's not nearly as bad as others make it seem. A very straight forward game. Could benefit from additional voicework. My pick would be Cosmo Spacely yelling at you.
6.329/10
3 years ago
SUS

Played this game at an arcade and it has great crisp art but the actual game is quite empty and simple. The layout has orbits and 2 uninteresting scoops and one ramp and that's about it. You basically just hit the shots to spell out character names to collect them for a multiball. There is another multiball for shooting the scoop on the left a few times. Other than this, I don't know what else there is to even do on the game. Pretty boring layout and rules. The art on the playfield is really good though and it's very vibrant and clear.

This game is a tremendous disappointment, considering the quality and possibilities of its great theme. I was initially wary of the game based on videos of it online. Then I played it several times at Southern Fried Gameroom Expo. It was a let-down. The rule set is a snooze: hit targets to spell the characters' names. The ball launch is a button with a weird "power meter" feature for when to hit the button. The display screen is the size and shape of a new LCD like on Stern's Batman 66, Aerosmith, and Star Wars, but it's actually a lo-res dot matrix or something with poor graphics. The playfield feels like its artificially small, as if the designers couldn't fill it properly to take up the whole game cabinet, so they just made an extra large apron so they could get away with less on the table. Again, and maybe the overriding issue here, is the waste of a theme that has tremendous potential but is handled in this game as if the game had been built in 1982.
1
There are 8 ratings (that include a comment) on this game. Currently showing results page 1 of 1.