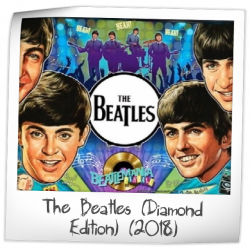 This game has received 6 approved Pinsider ratings. 19 more approved ratings are needed to get a rating and for it to be eligible for the Pinside Pinball Top 100 ranking.

Note! There are multiple versions of this game!
This is "The Beatles (Diamond Edition)".
The other versions are: The Beatles (Gold Edition) (regular version), The Beatles (Platinum Edition)

For me this is a wonderful theme, as I’m a Beatles fan
Paid above and beyond for the diamond edition
Simple, yet addictive gameplay combined with beautiful artwork, makes this a treat for anyone who likes The Beatles

Played this at Modern Pinball in Manhattan. Am a beatles fan, so enjoyed the music. The retro playfield was bright and colorful, but didn't have enough shots and variety to interest me beyond a few games. Song choice is limited -- surprised to see Taxman on there. I understand the choice to do a Beatlemania-themed machine, but I would have preferred '67-'70s Beatles theming or a Yellow Submarine film-themed machine. It's a collector's item, but not a deep playable machine.
8.856/10
1 year ago
ZUL

Now you too can play Seawitch-Supreme!

The Pros:
Finally, a Beatles game. Not the "bootles" but The Beatles. Only a few songs and modes to play through. Code is still not polished, but the changes to the PF and the additions of a target behind the 3 drops on the left and judicious use of the magnet at the top of the arch are well placed. Multiple skillshots from the plunge means that there are many ways to approach this game from the plunge into each ball. The Magneto spinner is well placed and adds quite a bit of chaos to the game drawing the ball in even when it is moving very quickly. The main shots of the game have been opened up where they needed to be and I'd be curious to know if they plan to implement a "classic" seawitch ruleset with a fleeper code. This deck looks and sounds GREAT! The EM score display is very well done and you can see all 4 players' score at all times for those quick tourney decisions. This game plays very fast and flows incredibly well.

The Cons:
Yoko Ono had a say in the approval of this game. The game has been "simplified" to a single level playfield to accommodate the wishes of the "feel" of the game. So, PBR gets 2 inch flippers, but The Beatles don't. Not the deepest ruleset, but still more complex than TNA. 2 ball multiball on ball 3 harkens back to the days of Data East. Oh yeah... Kaminkow had a hand in this game and he thinks he is a pinball game designer... The Unobtanium edition costs 17 Go-zillion bitcoins and has the playfield ink infused with the blood of Paul and Ringo and the fleeper rubbers have been injected with microcrystals made out of John's toenails and George's sitar strings. The first million dollar pinball game license. yay.

The Takeaway:
If you just have to have it and can afford it, go for it. It's lots of fun to play, especially on location or in someone else's collection.
6.979/10
2 years ago
JCS

Lucy in the sky with diamonds!

jeffspinballpalace edited previous rating on May 11, 2019.