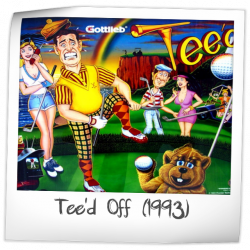 There are 42 ratings (that include a comment) on this game.
Currently showing results page 1 of 2.

For a post-85 Gottlieb, the theme is actually pretty decent and is very replayable. Sub-par artwork and repetitive callouts by the gopher undermine the overall game, however. Designer Jon Norris wanted to put more money and effort into the playfield, but was overruled by a Gottlieb executive who wanted the very expensive gopher topper added to the machine.
8.340/10
4 months ago
SNS

I do really enjoy this game - we own it and got a great deal on it, I also am better at it than anyone else in my house which I know adds to my emotional attachment to it more than other games haha but it’s fun, we will do upgrades to ours and I will like it even more I suspect.
8.968/10
5 months ago
DAV

This machine is still addicting three months in. I figure out a new scoring aspect almost daily. The machine is super fun between my partner and I who are competetive and still a fun play for a guest. I bought the manual for it and discovered a ton more details. I had been going to gamerooms and conventions for years and somehow had never played this game. It was instant fun. I could see how some would think it is "easy" but nope, not if you are going for high score action. The toys and games are frequent but you still have to figure out sequence, which shots are woth the risk and prioritize. I love the feature where you literally have to gamble your score. I cant recommend this game enough.

One my all time favs. So glad I found one

GlennTwiddle edited previous rating on November 01, 2021.
GlennTwiddle has owned this game in the past.

Great fun game,easy rules to follow and clear as to where to shoot. Not a game for good players but a fun game for the average players.A game you can walk up to and have a quick game.Would rate better if it wasn't compared to NGG and was rated as a pinball machine. It gets played more than some of my better machines
7.557/10
2 years ago
???

A good , fun, simple game I also love the music

I probably rated this game higher then i should but its a good game.The only problem for me was i am not a golf fan at all,the gopher is a fun little topper but he can get annoying after a bit.The art package isnt my thing but there is a few really fun shots and a few that are overused in modes.I didnt keep it long and really that came from it being a casual shooting game thats soo heavy i could hardly nudge the thing(built very very sturdy),you get a chance,give it some plays for sure,you can do much worse at its price point
8.460/10
2 years ago
JFB

i used to Play Tee'd Off at the CFB Ottawa Jrs members Club, itwas a hoot then, many moon later it is one of the game in my , is it goofy...a bit yes, is the theme somewhat simple a bit yes, but is it a blast to play absolutely. its good fun for the kids and grown ups, everybody finds something in it...is it serious to the point of being a nerd game? no its not Medusa thats for sure but it doesn't appeal to the same crowd. its simply plain silly fun if you want it or quite a challenging game if you really dig into it...that is the beauty of the pin...its Bill Murray meets Chevy Chase in a pinball format...which one are you?...Temper Temper

Family fun, good theme. Challenging to make it through all 27 holes to light Anything Goes. Satisfying to hear "SUPER JACKPOT" when you complete all the regular jackpots during multiball. The skins game is great, and can be quite nerve wracking when you have a huge score and the three standups on the left are lit to collect! Very underated game!
6.215/10
3 years ago
DIA

A solid game for the price, but it gets annoying quick. Rules are “sort of” easy to understand and the layout really isn’t bad. You can’t compare it to NGG. That’s like comparing a Kia to a Benz. If you find one for a cheap price, pick it up, but know that you won’t have it long and it will not be easy to sell.
6.967/10
3 years ago
ADA

Under rated machine. I do not get so bad a rating. I'm the owner and it's a great fun to play. Great fun for wife and children. If you understand the game, you will find that scoring makes sense. The punches have the right direction and sense. I like to return to him ... Hole in one :-)

This one lurks under the considerable shadow of No Good Gofers, which is too bad because this is a good pinball machine with a well thought-out design and a fun/snarky and very subtle twist to the golf theme (hence the title).
9.560/10
4 years ago
DWL

Super fun, and family friendly theme. Shots are satisfying and fun. I love the betting (double or nothing!) and the funny taunting from the gopher. I have the mechanical gopher topper, which is really cool. This is one of my top "go-to" games for guests. It's modern but not too fast, and everyone gets a good laugh.

I’ve had this machine for a short while and overall it’s a solid fun, family friendly game. Both kids and adults are drawn to it. Upgraded with LED’s the machine really comes to life. Gameplay is rather easy and depth is limited but don’t forget the fun factor, which it has. I agree with some of the others on lastability as I can’t see myself keeping it forever.
7.652/10
5 years ago
CML

Tee'd Off isn't a highly complex game, especially by today's standards, but it's fun and a great crowd-pleaser with a diverse group on hand. Kids and adults enjoy it, and the myriad of shots and modes are solid for the average player. Sure, you can fire the same shots over and over if you want, but the game has more depth than that, and there are enough ways to score points that you can try different tactics when you play.

Usually inexpensive for a DMD, it's a great pickup if you can snag one for a reasonable price.
5.843/10
5 years ago
SAP

Another Gottlieb "should of, could of" game. Compared to NGG of around the same era, this game is ultra bad. The layout is terrible and you never get any good flow going. The shots are boring and weird. He art is meh, sounds are meh, animations are meh. The only thing I really dig was the gopher topper, which still should have been better designed than how it was. Premiere, you guys just pumped out games too fast and didn't take the time to let your designers TWEAK your games to perfection! Bummer.
9.720/10
5 years ago
CON

Good starter or family pin, not for the serious player. overall a very under rated game, has lots of fun value.

Ok, this might be literally the best Family - Noob - First-Time pinball machine out there.

This is the game that ANYONE can walk up to and have a blast. Sure, it doesn't have the depth or speed of NGG that a pinball aficionado appreciates - but it's half the price of NGG and the "universal" appeal aspect of it is huge for me. By the way, TO preceded NGG by several years - NGG essentially stole this theme from TO, even if some feel they did it better.

Another thing to note is the build quality of this Gottlieb - it's more "solid" than almost any pinball machine of that era... Nothing "cheap" here.

This all being said, this game has a "last ability" flaw, as many have stated... It's good at first, but that fades fairly quickly. Too quickly. It's a game you may find yourself listing for sale sooner than you thought. For the price range, I would take any System 11 Game over this (or any Gottlieb of that era).

KingDaddy edited previous rating on June 11, 2015.
KingDaddy has owned this game in the past.

This Premier Gottlieb is built like a tank. Playing this after Stern's AC/DC Pro makes a clear proof of Gottlieb build quality. It is a very well built heavy duty machine! I really don't care about golfing, but the theme is very well integrated into the machine. It has a very cool gopher topper and I don't think the backglass is ugly, it's solid 90's golden era of pinball backglass with FBI director's "Winners don't use drugs" tag. :) (Again compare to the AC/DC Pro. And that's a Photoshop ugly bg.) I think the playfield is nicely thought and quite a good looking too.

Okay, for "true pinballers" propably dislike the unbalanced scoring and "the Gottlieb effect" also the comparison between this and No Good Gofers is not favoring this table. Keep in mind that Williams was industry's #1 manufacturer and this was well.. Gottlieb Premier.

I don't think I would like to own this machine, but when on location I keep inserting coins into this machine. Go ahead, give it a try!
8.036/10
7 years ago
JPF

Perhaps this is one of the "OK" Gottlieb games, but one that I can't forget from when I was still a kid. The toys were really neat, and the rules are actually unique, considering the SKINS game. This may not be one of my favorites, but one that will be kept in my memories.
5.730/10
7 years ago
MRD

After just 2 months of ownership, this game is gone. The initial fun factor deteriorates very quickly, and the lack of almost any depth at all ruins this game unless it's in a bigger collection.

A good pin will last the test of time, and while I still think this one nails the theme, its just too blah in nearly all other regards to be considered a keeper.

robbiedoo edited previous rating on December 29, 2015.
robbiedoo has owned this game in the past.

Next12
There are 42 ratings (that include a comment) on this game. Currently showing results page 1 of 2.