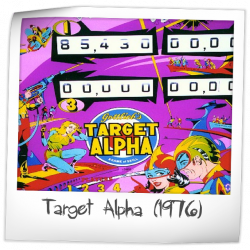 Target Alpha is a four-player reimagining of Gottlieb’s classic one-player wedgehead El Dorado. Contrary to El Dorado’s old west theme, Target Alpha features a science fiction theme complete with flying machines, laser guns and space helmets. A few features are stripped away from the original El Dorado ruleset, and a few are added to compliment the multi-player operation. The game features fifteen drop targets, including a massive row of ten that runs across the top of the playfield. Gottlieb also released Solar City, the same design with new art and two player operation, the same year.

This game has received 52 approved Pinsider ratings and currently has a rating of 7.748 out of 10.

There are 35 rating comments for this game.

179 Pinsiders have this game in their collections.

95 Pinsiders have this game on their wishlist.

28 public locations known where you can play this machine.

We have seen this game for sale in the Pinside Market 19 times. The median asking price is $800

There are 333 forum topics linked to this game, 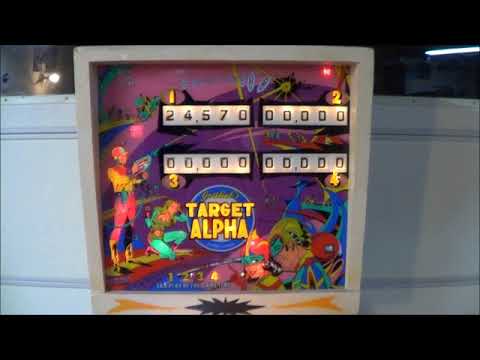