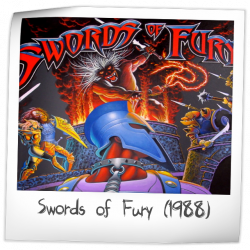 There are 99 ratings (that include a comment) on this game.
Currently showing results page 3 of 4.

For a williams this one plays a bit clunky, dunno if that's particularly good or bad just it's noticeably different. Multiball, a jackpot, a mini playfield and even an old school horseshoe. Not everyone likes this one but i do as it fits my notion of instant fun.

Cabinet is alright and the runes are quite decorative, could probably suit a metalhead as much as a dnd fan without actually getting the bally dungeons and dragons i suppose, playfield is nice enough but the backglass is nothing special aside from the logo font.

Main thing here though is the soundtrack, i don't know what it is about this composer but clearly he's the only person on williams payroll back in the day who actually knew how to push their fm chip to it's limits as best evidenced in this alongside black knight 2000, space station and banzai run.

This soundtrack in particular is all synth 70s progressive rock, think alan parsons project for the main theme and it's variations along with a purely goblin style prog rock organ piece for the multiball. It really is all that and imo sufficient to justify owning the game which i certainly wouldn't mind.

Paksoi has this game on the wishlist.

If I hear "Lionman!" One more time.... Seriously, SOF has the best music of any pin I've ever heard. Great theme and good play. The over reliance on the magic play field makes it a bit monotonous and the lack of any ball save function makes it annoying for newer players. The multiball is good but again - no second chances with it. Generally a good game but the rule set in terms of what you're supposed to do can be confusing and not obvious. When I first got it, it wasn't obvious how to play it or what the objectives were like it is on most games. Still like it though even if it's mainly for the music!
7.826/10
5 years ago
TBK

"Lionman! Defeat the Balrog!"
(As new young pinheads "shoot their loads" in their pants)

A game most widely known for its soundtrack.
One of the great examples of music in pinball history.
No one forgets this music after listening to the game for the first time.
Brian Schmidt's best work in this industry area.

Gameplay is solid, but a bit repetitive.
Ruleset is mediocre, but it really does not matter in this case, the game was not designed to play for "hours".
Colorful artwork, and fun game.
Gameplay is similar to F-14 Tomcat including the right ramp shot.
Mini playfield targets and assembly get bashed pretty hard due to ball launch shot into the game.
Ramp takes serious abuse as well.
Multiball windup is pretty adrenaline rushing.

Collector's quality examples are on the rise quickly for this machine.
Mostly as stated previously that people in their 20s are getting serious hard ons for the machine.
NOS parts are getting scooped up for restorations.
Reproduction parts have now been made.

Guess what?
This game has been popular for over 30 years.
All "hardcore" System 11 collectors have one, restored with new playfields.
Not everybody is going to have one, as there just as not that many left in good shape to maintain.
I owned several, but passed my last restored classic example onto a friend, who still has the game today, 15+ years later.

If you are Williams Systems 11 fan, this is a great pairing with games like BK2K, F-14 Tomcat, Whirlwind, and Earthshaker.

FINAL NOTE: "LIONMAN!" is not a pinball review, and has the same value as the term, "New Out of Box".

xTheBlackKnightx edited previous rating on May 24, 2016.

So many fun shots on this alternative to Sorcerer / Black Knight / Metal Man themes. The upper left PF has an interesting array of shots that add up to good points, and the u-ramp has several ways off. Great fun!

Love to have one of these in my collection someday.

Ramtuathal edited previous rating on January 29, 2017.
Ramtuathal has this game on the wishlist.

Great all around pin! Suburb playfield and sound. If you don't have one, find one and buy it before the price skyrockets. System 11 sublime.

pinbender has owned this game in the past.

Loved this pin and hated to trade it away but wanted to change things up a bit. Definitely is a pin I would like to own again someday. Incredible music that varies based on number of ball currently locked. Love how many shots you have to choose from from each flipper. Love the bi-directional tunnel and the upper playfield drops. Top 3 System 11 game for sure.

So everyone all of a sudden loves SoF, but is it really as good as the hype says? While I won't speak for all, I didn't find it to be worthy of the hype. Yes, it's a very cool layout and the sounds are pretty rad (though the sword sound every time you press the flipper button can get really old), but gameplay itself just didn't do it for me. After a few games, I was ready to move on. Another "cool to play at someone else's house" pin for me. Now, when the game could be found for under a grand, sure! After all the "LIONMAN" posts though, good luck snagging one cheap.

The little trails in the game are cool (esp the cave), but I felt like there just wasn't enough to shoot for. Wanted it to be better, but just found myself bored. Maybe I need more time on this deck; maybe it's overhyped.

Sound and playfield art are top notch. Have bare playfield hanging for art! I set game on very hard and was rolling the score display. Upper mini playfield timed drops are great especially for the jackpot. Multiball to easy to achieve. Worth playing or owning to say you have.
8.139/10
6 years ago
JNS

pretty fun to play system 11 I really like the music & sound effects on this game if they are dated & 80's sounding hearing the LIONMAN!! LIONMAN!! call out never gets old for me / for me this is probably the first title I ever got a really good deal on as far as fair price & good condition I play it almost daily

As far as System 11 machines go, this one feels pretty unique to me. The upper playfield is a cool feature during single ball play and a great idea for the jackpot during multiball. I really like the theme, it's got just the right amount of cheesiness that makes for a good theme you can get behind. The playfield layout is also quite unique. Plus, Lionman!
7.182/10
6 years ago
XOR

This is a really fun and underrated Sys 11 era game. The sounds get annoying and the flow could be better. I think the playfield design is a little overloaded but this is a really cool machine.

Robotron2085 has this game on the wishlist.

Like Sorcerer, another older, so-so game. I'm not sure why these games are in the Top 100 because they're just not that much fun to play.

agodfrey has owned this game in the past.

Very unique layout...I like that it's not a rehash of the same similar designs that have been done over and over. Great fun to play.

such a rare unique game, It never gets old. Love the sound and the originality of it the most.
7.362/10
7 years ago
ROB

Can be a lot of fun, easy to get into multiball and has a good mini playfield.

Archytas has owned this game in the past.

I owned one of these for a number of years until recently when I sold it because it needed some tlc to get it back to full working order. This game never lets you down. Booming sounds. The 'Challenge me!' start up gets the pulse racing for what may be a good game or a great game depending on how relaxed and confident you are of mastering the game ahead. It flows beautifully when your on your game. Would have kept it if it had been fully working. Always remember the first time I clocked the machine. Felt like a major achievement. The game's rumbling bass intro gave me a similar buzz to the one I got when I listened in the 80's to the intro to the Dead Kennedys "California Uber Alles" all those years ago on a decent retro stereo sound system. I'll miss the SOF (a bitch).
8.960/10
8 years ago
REG

This is an excellent game... For a pre dmd game it is up there for its difficulty and lastability. This one is very challenging, and with the multiball jackpot, a lot of fun and possible frustration leading to game after game after game....

wildinindiana has owned this game in the past.

PreviousNext1234
There are 99 ratings (that include a comment) on this game. Currently showing results page 3 of 4.