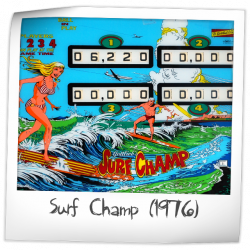 The best EM I've ever played.

Cheesegritty has owned this game in the past.

The drop targets make this game worth a few flips. After that, the poor playfield art has me ready to move on.
5.607/10
1 year ago
QXZ

I HATE, HATE, HATE this machine for the same reason that others love it. OMG, what a drain monster! Just about every shot on this one, is dangerous. The spinner, rather than being a sought after shot, is simply a block for the 2 uppermost drops in the rack. I don't like a table where the drops are all the way up top, and I can't snipe them off.

Even nudging won't do you much good when going for the uppermost drop, because of that spinner block, and the fact that the bumper doesn't have the proper angle for a push shot. So you pretty much need to come in through the left inlane, to even get the angle off the bumper for the nudge of that target.

That task of making that last target is a total deal breaker for me. Oh, and anything that comes from the upper playfield, through the spinner, that doesn't actually spin the spinner? Might as well go get your next beer 'cuz its-a-coming SDTM. Slow rollers in the center of the table are always a challenge, but when that spinner just slows it down even more, that effect is amplified. Like a holder putting the football down for the kicker on a field-goal try.

Challenging?... You bet! A little too much for my tastes. About the only safe shot, is to go up the left lane, back to the head. That just made me think of something. I play Top Card quite a bit, and with that game, you NEED to get the Ace target, or you're just spinning your wheels. Maybe it's the same with that upper target on this game. I've played this one for hours, and I don't recall ever getting all 5 drops down. I don't think I've even hit a single replay on it.

Next time I play it, I'm going to shoot that left lane to the top, until I catch that upper target with a nudge off the bumper. Just like the Ace in Top Card, I'm not going to shoot at anything else until I get that pesky critter. If that works out, I might take this one on again. However, even if I am able to master it, the layout is still going to be a dealbreaker for me.
7.917/10
2 years ago
???

Pros:
Good art and fun shots. Getting all of the rollovers to get double bonus is great. The challenging bonus shot to go back into the top lanes is really satisfying.

Cons:
The spinner does nothing, even when lit it only gives one hundred points. Scoring can seem imbalanced towards the scoop when it is fully lit and can just be luck to actually get it, with that being said you still need the rollovers to actually make it worth points.

Overall:
This is a great game with a couple questionable design choices but I would recommend it to anyone who likes em’s.

This game would still draw quarters if it stunk. Seriously, who can ignore the hot chick on the BG? The good news is that the game plays even better than it looks. This is a bit of a different layout, which makes for variety in the gameroom. Looks fairly easy to beat, but for every really good game, you're going to have a series of close calls and almost good games. So far, impossible to master, and that makes it a keeper for me.

bobnatlanta has owned this game in the past.

I'm always a fan of 'build up the hole' rulesets, but Surf Champ feels a bit of a let down, since it's basically impossible to shoot the hole on purpose (especially with strong flippers and that annoying Gottlieb EM edge that the ball just rolls around). The pop bumpers are also a bit strangely placed, and don't seem to add much to the game.

one of gottliebs best games. find one, play it. enjoy.

Best of the EM's out there in my opinion. Gameplay is great, theme is awesome, artwork is awesome and shot selections are great compared to other EM's of this era.

Surf Champ is a top 4 player EM. As others have mentioned it really has it all with the star rollovers, drop targets spinner and "random" lights for bonus.

I don't find anything to dislike about the machine and heavily recommend this to others to play or add to their collection.

Also watch Classic Game Room's humorous review of Surfer, the 2 player version from Papa. It is funny and adds the monster and bomber features we all knew were there in the back glass but just missed.

For a 4-player EM, this game has some incredible rules, aka wizard modes. Light all 5 rollovers to light the side lanes for bonus multiplier, and lighting spinner for 100...
Knock all 5 drops as well for a 5k bonus plus lighting special.
I especially enjoy this game on 3-ball settings, as you get the extra bonus rollover light at the top (toggled via the spinner), and 2 of the rollovers are linked.

Love this game..It has roll overs, drop targets, spinner.. A lot of people seem not to like because not all drop targets are point blank and the spinner and pop bumper can come right back at you.. Once you have played it and figure out what shots and from which flipper you can do certain shots from.. For and EM game it is a great game..

There is something not quite right about the layout of this game.
I recall playing this and the two player version when they were new. It's a fast game and has the features to make for a good game with the exception that it's not. The drop targets are hard to knock down. Back hand flips are a favourite if mine but it never really worked for me on this game.
I believe a game should have clear direct shots and not be based on luck. The treble bonus on the last ball makes for a lucky ball. If it's a good ball you whiz past your opponents as it comes on irrespective if what you do. Great colours, good artwork but not one to keep as the game gets repetitive after time and too many elements are based on luck.

Got some good time on this one and I wasn't disappointed. Lots to do and all of it is linked together to make everything important (except the spinner) to get a good score. The art is bright and happy. Nice cabinet art too.
Haven't mastered, or even really tried, the backhand shot so the top drops are luck as much as anything. Really feels good to make the "skill shot" cleanly from the plunger.

ReallifePin has owned this game in the past.

Surf Champ: This is the game that gets the most play at my place. One of the last multi-players I've kept. I am lucky to own some popular wedgeheads, all in great condition, (Atlantis, Jacks Open, Volley, Buckaroo, Big Hit, Team One, Pro Pool), and this is my favorite game. Yes, better all-around than those popular titles, IMHO. Both flippers can hit all the drops and roll overs, has a wicked spinner (don't hit it straight on though, into the pop bumper and straight back at ya, down the drain), great theme, extra ball special, replay special, Match feature (of course)...so many ways to play and win. Surf Champ may be the best pin in history (I haven't played them all so I'm being somewhat dramatic), but if not...it's not far off.

presqueisle edited previous rating on April 22, 2015.
presqueisle has owned this game in the past.

I own this title, One of my top 5 Gotts, IMO the top one to own of all the 1970's 4 player machines. Not an overly deep rule set, but properly set up, it is not an easy machine to best. The drop targets are a tough get, no clear shot at the top target, luck is your friend, has a Triple bonus option on the final ball ( I have mine set on 3 ball) that can help you overtake even a big score from your opponent. I would be very hard pressed to sell this one. to me this is the class of the 4 player machines. Get one if you can.

Surf Champ/Surfer is a brilliant design/layout by Ed Krynski the rules on this table are incredibly well implemented and considering this is an EM multiplayer, made even more impressive.

The Pros:
Believe it or not... bonus is the key to this game. You have to know what to shoot and what to aim for. Backhand shots to the drops on the left. Backhand shot (you may have to juggle this one first) to the saucer from the right. Getting the upper saucer lit to 5k is great, but shooting it and making it stick is a whole different matter. The spinner has to shot towards the side or the left bumper will make you pay for it SDTM! Drop targets are tough shots and deflect the ball into the pop bumpers. lighting 3x bonus on the last ball will make the difference between you winning or losing a game.

The Cons:
Tilting with 3x bonus.... Aaaaagh! Damn that space between the flippers.

The Takeaway:
Classic Gottleib in so many ways. Now I just have to find one in good shape for a good price. A true player's game from the brilliant mind of Master K.

Update:
I just picked up a copy of this deck and can't wait to fix it up, tune it and make it play worthy. I'm a happy pinhead!

First game I ever bought, great playing and excellent looking game. If you have ever played this game chances are you have mastered the backhand shot to the drop targets. I would recommend this game to anyone!

Update: Sold mine awhile back because the game got somewhat boring. I don't know if I would buy one again if I had the chance.

Whitebuffalo edited previous rating on June 06, 2013.
Whitebuffalo has owned this game in the past.