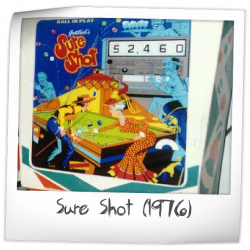 Very addictive game. Better rule set on three ball which gets you higher scores than on five, most of the time. It's a shot makers game with a few tough ones and a real/ reward with the centre standup. Overall a great game.
9.189/10
1 year ago
ROB

Not my first pin, but the first pinball my dad brought home, around 1978. It's a great game to master the art of pinball, and one of the best wedgeheads I've seen to perfect your aiming skills. "Sure Shot" is well-named for that reason. Learning how to hit the 12/15, 7/13, 8/14 on command was the first goal for a young aspiring player. Then, hitting the longer 10 and 11 shots was the next goal to master, and a difficult but satisfying shot to hit on cue. Next hardest, being able to hit the 6 and 9s'. This requires a bank off the bumpers on either side of the 12/15, and was great to discover that it could be done, and even better to be able to do it at will. This shot can also be modified to hit the in or outlanes behind the slings... the only direct way to hit the 4 or 5, but not my favorite shot as it will cost you the ball in play. Next challenge is slicing the ball straight up off the flippers straight up through the 2 and 3 rollovers. One of the hardest shots to perfect in this game, but it will occasionally reward you twice by scoring the 2 (or 3) on the way up, then give you another needed number (4, 5, or the elusive 1) on the way down. Finally, the hardest shot of all - hitting the 1 ball. To accomplish this you have to hit one of the side bumpers off the flipper, and bounce at just the right angle to go up through the 1 roll-over. This is an incredibly satisfying shot and one of the hardest to do on command. I think one of the best moments ever with this game was being able to hit this 1 ball shot as the last ball left to hit and having the special lit and scoring it off the same shot. Aside from hitting the balls, the two kick-out holes on each side are a great way to rack up 5,000 points at a time once the corresponding balls are lit. Best game I ever had was about 215,000 and a handful of specials. Don't have the exact score because it was about 3 decades ago. Great game to play and a great way to master the shots.

A classic Gottlieb wedgehead, simple but fun layout. I really enjoy roll over games and this one plays to that perfectly. I love how the scoop is more valuable the more light pool balls you have, so there is always something to shoot for. Artwork is a lot of fun and this has become the most played game in my collection by my friends. Play it if you get the chance!

Footbrawl edited previous rating on November 01, 2018.
Footbrawl has owned this game in the past.

Sure Shot is a classic. Decent and fair rules, good playfield, and some hard shots to hit! You CAN hit the center lane with the flippers with practice, but it's very tough to do. Winning a replay is a rarity. Replay value is high. Great EM.

Sure Shot is a solid Gottlieb wedgehead. Simple but fun job to collect all the balls. You have to be good on the plunge to get the number 1 ball as that's the only way to claim it. More challenging than it looks.

n1teowl has owned this game in the past.

I was skeptical about this game upon restoring an example I received for free from a friend (it was a barn find and need a lot of TLC).  Surprisingly, it is a decent game with plenty of scoring opportunities.  The two instances of  bonus based on balls collected—during play at the saucers and end-of-ball bonus—are nice features.   On my example of the game, I have clearcoated the playfield, provided a steep pitch and opened up the outlanes, so Sure Shot provides plenty of challenge--collecting all fifteen billiard balls in one game is not a foregone conclusion…you gotta work for it.  Brutal outlanes on the game, for sure.  I’m not a fan of the art/theme, and it is one of Gordon Morison’s rare misses.  The early-century barroom scene really doesn’t do it for me.  It would have worked better with a greaser pool hall feel, a la Bally’s Eight Ball, and it looks like the side art adopts this style, but the playfield and backglass do not.  Just another instance of Gottlieb keeping their themes as wholesome as possible.   Once all pool balls have been collected, there isn’t really much to do except collect the specials at the saucers and upper middle rollover.  Fun when on location, but may leave the collector wanting more to shoot for once the main goal has been achieved.   This isn’t a game I would have went out of my way to own if it didn’t fall into my lap the way it did, and I can’t see it sticking around for too long, but it’ll be fun for a few months.
9.000/10
4 years ago
GLW

Will never leave my collection

Sure Shot was my first EM and it was a beauty! I loved the classic artwork and it looked great in my living room. The rules were simple: hit all the pool ball targets, and then chase the special.
I wouldn’t mind having it back again someday. Good thing I sold it to someone local.

When shopped correctly and playing like factory new this Gottlieb Pool themed game is a very good player. You must make the 1 ball on the top arch rollover and also be able to flip into the 2 kick out holes at will to beat this tough to beat game by score or special. The wide open playfield is especially nice because you can get the ball moving rally fast without any restrictions and can make for some extra sharp skilled shots from just about anywhere on the playfield. Great artwork/coloring on playfield, cabinet and special nice early 1900's look on the backglass. If you like rollovers then this is the game for you. There are 3 bulls eye targets that play an important part in the kick out hole 1000 point scoring. The game is mid 1970's(no drop targets)but has the 1960's Gottlieb type of playfield layout which is nice and reminds me a little of ther Classic 1960's Gottlieb Bank a Ball. Also the "special" for replay moves from left kick out hole to right kick out hole to center number 1 rollover on top arch, you have to catch it right to score a special. Any target or rollover score moves special around.

Vic_Camp has owned this game in the past.

A nice but albeit frustrating game. So often so close but ultimately the score falls short of the mark.
Terrific theme backed up by a glorious backglass and complementary playfield. This machine is typical of Gottlieb superiority in the EM era.
I was fortunate to pick up a delightfully original game from the US with low plays and in pristine condition. It assumes pride of place in my collection.
8.063/10
7 years ago
ZUL

Skill Shot is the AAB version of Bank Shot. Bank Shot was the game that Roger Sharpe used to demonstrate the "skill" involved in playing pinball that got the game back into NYC.

The Pros:
Lots to shoot for. Some shots are gimmes. the lane shots at the top of the PF can be shot from below (so tough) as well as dropped in from above with a bit of nudging and luck. Complete all 15 ball targets ASAP and hit the alternating lit "WOW" at the saucers and the center "1" upper lane. The 1 lane from the top is the "skill" shot Roger hit to prove his point to the NYC legislators and is an absolute priority from the plunger. Lighting 1-5 also lights up the pops which can offer big points!

The Cons:
Finding a copy with a nice PF and BG is a tough call.

The Takeaway:
A very simple, but never easy game from Master K and the king of pinball in the early 70's, Gottlieb. This game is a true player that keeps on giving.
7.075/10
7 years ago
TGB

A perfect addition to a game room that has both pinball and pool. It's a fun game with 14 drop targets, acting as balls 1-7 and 9-15.

This game irritates me. The artwork isn't great. The Playfield artwork is colourful but not great. What makes this game so addictive? I find myself playing this game more than all the others in my collection with the exception of Capt. Card. The secret to my liking it so much is those two kick out holes and chasing an elusive special when you've lit all 15 balls. The game always has me coming back for more. I look at the backglass and think "I could have done better than that", yet I find my self smiling at it. I think nostalgia has started to creep into my life big time.
There was a Sure Shot lined up a few games down from an Atlantis in The Crystal Rooms in the Strand in London back in 1976/77. That same arcade now has only gambling machines and is often empty and always soul less a true reflection of modern society.
Sure Shot is a simple yet very infectious game. I was fortunate enough to buy one from a lovely guy in Ottawa. I have restored the cabinet and the Playfield is as good as new. It is ultra fast and whilst it irritates me I can't help but loving it.

BallyWizard edited previous rating on July 07, 2013.
BallyWizard has owned this game in the past.