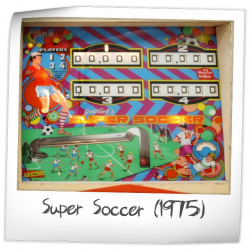 I think it's a fun game for the family, it's a four player and yes it's a great tournament pinball and more fun with 4 players. Artwork fits the theme well. Pretty hard to get ball through the spinners because of bulky posts, so it makes the game more interesting and challenging ...animated backglass is awesome, I like the extra point score animation on the back glass , great unique feature. I like this pin, it's chimes, art package and game play

Really fun game, the spinners are excellent fun to shoot and the progressive bonus system is fantastic. The bonus counting unit in the backglass is a fun toy and alternative to your standard playfield style bonus. Another cool feature is the mystery bonus scoop on the playfield. What a great little innovative set up for a machine of this vintage. This game is super fun to play with friends due to the bonus having such a huge effect on score. When you finish your first ball, scores could be pretty far apart, but generally by the third ball, things even out and you regularly end up with close games that come down to the wire while everyone watches the last players bonus collect. A true players game that should be enjoyed by most who walk up to it!

dpapclare has owned this game in the past.

I thought that Top Score was one of my favourite EMs, until I discovered Super Soccer.
Take Top Score / 300, remove the bagatelle lane on the right and put a reciprocal spinner in. Also add more rollovers for an advancing skill shot.

The backbox animation is incredibly satisfying, and the need to shoot for the bonus collect hole makes the game a tonne of fun. So basically Top Score, except you can easily rip a spinner from either flipper.
One of my favourite EM games.
8.700/10
5 years ago
GLW

Can't beat the back glass animation I just wish the red balls were painted like soccer balls would be a lot better get those spinners going and rack up 10 bonus balls Bam 10,000 points get the red kick out call Bam 10,000 points

gwpins has owned this game in the past.

Copied from my review of Gottlieb Soccer...

The comparisons are always out there! Two separate games which are so close together in design, we can't really separate them! Soccer (2-player)/Super Soccer (4-player) vs. Too Score (2-player)/300 (4-player).

I had the pleasure of having both Soccer and Top Score side by side for several months. Since they were both almost identical, one of them had to go - that was Top Score.

I'm not a fan of the Soccer theme (I played it in gym class in school because we had to), but beyond the theme, Soccer is a fun if not tough game from Gottlieb!

Soccer is simple - build the bonus, and collect it without draining. It's simple in theory, but that ball wants to drain!

With three-inch leg levelers on the back, a good coat of wax, and new rubbers, Soccer is a ton of fun to play! If you can grab one, do it!

Super Soccer is a game that has quite a bit going for it and then... meh. For me, I always compare this to 300 and it just is not on the same level of the quality of game play.

The Pros:
Spinners and a ball bonus counter make a great combination. 3 bumpers on top, good lanes and standups on the side. Double scoops at the top with the u-turn. I like the alternating lamps at the top arch at the start of the ball. Cycling skill shots are way sweet.

The Cons:
Why doesn't this game play better? Even the spinners have better placement with the bumpers above them. If you do find one, set this game up steep and make your slings super sensitive. Otherwise it gets stale quick.

The Takeaway:
This game must have been a great seller in the rest of the world with the theme. Personally, I would have just re-art-packaged 300 and gone from there. Set it up steep and wax it up for a more exciting game.