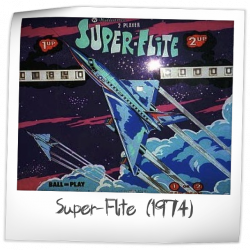 I picked up a Super-Flite not long ago because it was a deal I couldn't pass up. It wasn't one I was interested in getting, but sometimes you gotta take a deal. The layout is okay, but I wish there was more variation - an orbit or something back to the top of the playfield would be awesome, and break up what can be an otherwise tedious game at times. I love ripping a good spinner, and wish this game had one.

The offset slings are cool, and add a bit of randomness to the game. Biggest gripe is that it's basically a crapshoot to get to the top of the playfield after you plunge - basically just have to hope the pop bumper throws the ball back up there randomly at some point. Basically you're out to shoot two banks worth of targets that are lined around the perimeter of the playfield, which gets old. Complete two banks to get 3x bonus and light extra ball on the left inlane. Upper and lower gates are cool, but again, the upper gate is basically impossible to shoot for, and you have to hope you get a pop to shoot it through. As others have said, it definitely plays fast for an EM!

Chimes are typical janky Williams chimes of the era, and nothing to write home about.

Artwork is definitely super cool with the jets!

jfoust has owned this game in the past.

Previous comments have mentioned how fast this machine is for EM, they are not kidding. And besides getting just the right bank shot for upper middle letter targets, learning the right amount of spring action to get proper number of bounces for reward position on eject hole is challenging too. I loved it since I was a kid and now my kids do too.
7.966/10
4 years ago
DEL

The ball comes out and is real slow at the top but once thru the neck this game is super fast. Plays like a nicely set up SS. Really surprised me it doesn't feel like an EM.
5.903/10
5 years ago
YOS

3 bumpers and a dozen stand-up targets are the main attraction of this pin. The upper PF is a bit of wasted space. The only way you can get back up there is via the middle bumper. I consider that poor layout. OK for a few games but not that much fun.
8.390/10
6 years ago
DLC

Super-Flite is my first machine. I wanted an EM pin with lots to shoot at and this pin has it. Four banks of three targets (A-B-C-D), three pop bumpers, two side bonus advance targets, two side gates (top and bottom), two 100 point roll-over buttons, the kick-out hole up top and the center advance bonus target.

A cool feature this pin has is the offset slingshots. Your ball can go where you least expect it to if your not watching when it hits one.

The rule set is straight forward and so is the open layout. However, looks can be deceiving. This pin is feast or famine at times. It'll fling the ball and hit multiple consecutive targets and make you want more, or it'll drain ball after ball because you didn't plan your shot and frustrate the hell out of you. It plays fast, especially when it hits the pop bumpers and it can play slow if you don't send the ball back up the play field where it belongs!

I haven't been disappointed with Super-Flite. It's fun and the whole family enjoys it. If you find one or it's 4 player version Strato-Flite I would encourage you to pick it up.

dontfeed edited previous rating on July 01, 2013.
dontfeed has owned this game in the past.

Super-Flite is a game that surprised me. I had seen this game before and thought... what a boring design. Wide open pf, standup shots and a newly waxed pf offer one of the fastest games for it's time.

The Pros:
This game is FAST. The ball screams across the pf. Getting the A-B-C-D stars lit offers different levels of rewards in any sequence. The artwork is spot on. Thank you Christian Marche. The deltawing jet on the BG is perfect for this theme. B and C bank targets near the middle of the top saucer require banked shots aimed off of the sides of the pf!

The Cons:
Drop targets would have been cooler! Still this may be a case of the "firepower factor" where drops would be cool, but maybe not. Sometimes the game will reward the player for flailing, but true players will be able to stall the ball and aim for needed targets.

The Takeaway:
If you can find one in good shape, get it in your game room.

Update:
I found a great copy of this deck in a man's basement who had owned it since 1979. I took it home, worked on it and waxed it up. The priority from the top of the center light which opens up the lower right hand gate. 5k + an extra ball is crucial on this table. Getting 2 out of the ABCD stars lit is massive as it lights 3x bonus AND the extra ball. Not much of a reason to complete the other 2 banks of 3 standups as it only lights the special standup in the center and if you are playing that well, you probably have earned a credit or three already. This game has a right sling, left sling right outlane combo that is your pinball death knell. Beware! The 15 standups on this game mean this deck never slows down. What I'm saying is that the ball moves so fast on this deck, I lost it in my field of vision. What?!? why is that ball in the outlane? The only games that have ever done that to me in my collection are my WPT and my Shadow. Both of those games are wicked fast and well known to be challenging. Well this EM table is the only analog deck that I know of that can do that as well. 5 ball games usually last less than a minute. Righteous!

Update v2:
I brought this deck to the Pinball Showdown and put it into the EM tourney bank. Between this and Surf Champ, this was the game that more players cursed out. One of the things that they spoke about was the "randomness of the game". I gave this a bit of thought and I have to agree with it. The design is a dangerous one and as soon as the ball is out of control, it is really out of control. Once you shoot for a target, then it is a matter of reaching for it and grasping for control again. Rinse and repeat. One thing that I really learned about this game is that it is all about making the most of your shots and after the ball is off the flipper, you must resign to the fact that the pinball universe will do what it will. All that you can do is, the best with what you are given. That's it. Super-Flite is the ultimate pinball life's lesson.