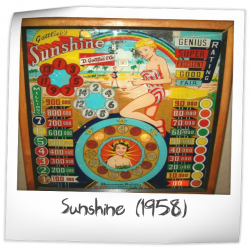 Sunshine is a very pretty machine - lots of fun to play; difficulty factor is high but also it can be frustrating with the triple gobble holes, triple center drain lanes and widely spaced flippers. I've found its very much a nudger's game: with good nudging strategy you can keep the ball bouncing off the three center posts between the flippers. Simply keeping the ball in play here is a constant battle.
The number wheel in the backglass is a great feature. With each new ball it spins to a new position, giving three random roll-overs the ability to score a pair of numbers instead of just a single. It also can point to the "Star Special" which, when the Star is lit can award a Special at any time in the game. The number wheel only spins when a ball drains, so its not necessary to divide your attention to the backbox while the game is being played - something I do appreciate making SS a friendly player.
The pop bumpers also are special in Sunshine: When you hit the "Pop Bumper ON" switch the pops light up in groups which alternate with game play. When lit, the pops score 100,000 instead of 10,000 points on every hit. This is a major scoring feature that's fun to use. The lit bumpers will stay on until the "OFF" button is hit. The two ON/OFF buttons are right in the middle of the playfield, so they get plenty of action.
Slingshots in SS are also special - when they're lit up with a special light under the slingshot plastic the slings also score 100,000 on each hit. This is a sort of random feature that turns on/off by itself but when lit you will find yourself trying everything to get the ball into the slingshots and keeping it there. Because Sunshine doesn't have outlanes, its not risky to keep the ball bouncing off the slings making the 10X scoring on the slingshots lots of fun.
Sunshine also is great in the way it uses the number groups to reward Specials. Lighting all of the Red numbers makes all the Red roll-overs Special. Lighting all of the Whites does the same for the White roll-overs and if you light up ALL of the numbers in the backglass the game makes ALL roll-overs special!!
Finally, I do LOVE the "player rating" system in Sunshine. Its my understanting that Gottlieb only made 4 games with the player rating system. I think its a neat feature. You must make 3 million points to even rate "Fair" which I find pretty challenging to do most of the time. I've only made "Genius" once in nearly a year of ownership, so that's a VERY tough thing to do but it can be made!
Sunshine is a great game - a tough one for sure. Late in the "woodrail" era, it reminds us of a different time in history. On the backglass, you'll see an iconic American by-line: "As American as Baseball and Hotdogs". The clowns on the apron along with the reminder "For amusement only. No prizes. No wagering". Old school, beautiful and feature packed. Sunshine will challenge you to keep the ball in play - it will flash those pop bumpers and sling shots offering 10X scoring opportunities. For sure there's lots of danger in the wide flipper layout, but with good nudging skills you have a much better chance of keeping things moving. Its a beautiful classic piece of Americana.

Edit Apr 2019: After owning SS for about a year, a number of rating factors were adjusted. Mostly downward. The PF layout, with the triple gobble holes isn't great. Still, very pretty and I do like the spinning wheel in the back glass and the player rating system.

SilverWings edited previous rating on April 01, 2019.
SilverWings has owned this game in the past.

Art. Great playfield art. Love the sun at the top of the playfield and of course the woman at the bottom! Backglass is a nice effort but not a true classic.

A key strategy to winning on this game is lighting the pop bumpers and then scoring while they are on and of course the 'off pop bumpers' switch is right in the line of the bumpers. Pure Gottlieb genius!

Lastly one of 4 games that has the rating in the backglass. Love this aspect as even scoring FAIR feels good. I dream of scoring Genius!

Yes, it can be tough at the bottom with the flipper configuration but good nudging and new rubbers ensures multiple saves.

Another classic from the Gottlieb stable.

Shapeshifter edited previous rating on May 15, 2016.
Shapeshifter has owned this game in the past.

This is a late woodrail era game with 3 gobble holes and 5 pop bumpers. The Kickers on the sides and some nudging can lead the player to rack up a lot of points quickly without even using the flippers. Flipper placement on this game is off to the sides with 3 lanes in between, making keeping a ball in play somewhat challenging. Gottlieb reused a lot of features in this era, including the scoring system (Fair to Genius), and this predates the score reel era. Last time I played, I was able to rack up the replays pretty quickly.

In terms of playability, this is a fun game, but more gambling machine than long player. The theme on this is excellent. My main issue with this game is that the backglass animation, which is a spinning wheel warps and separates from the bakelite very easily (every machine I've seen or read about seems to have this issue). Outside of that, this is a keeper.