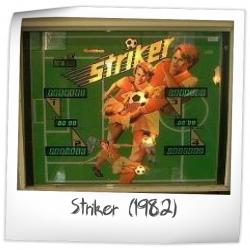 Played this one a lot as a kid. Its pretty rare in the US so not many people have had a chance to play it.
The six flippers makes the game unique but plays well into the soccer theme. The divided playfield makes the game a challenge to score goals without the defense stopping you. Its important to learn to move the ball between the two sides in order to score.

Speech is good for an early 80s game.

Its a simple rule set by today's standards and still fun to play considering the era. For an early 80s machine it's a pretty involved ruleset and you have to think and pass to score goals.

Each goal adds extra end-of-ball bonus and adds 5 seconds of 'shootout' time after your last ball. So goals is an important part of scoring well.

I played this as a kid so I'm a little biased, but Striker still gets as much play as anything else in my collection.

With four flippers and sort of a split play field this pin is a little hard to describe. There are ways to move the ball from one side to the other side; This is a skill you need to master. There are targets you need to hit that will be on the side of the play field your are not on.

There are not many of these around. I was fortunate to get to play one.

I will like to own one.
1
There are 2 ratings (that include a comment) on this game. Currently showing results page 1 of 1.