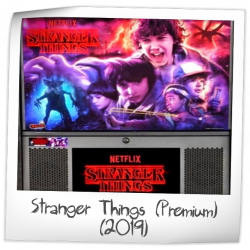 This game ranks 2nd in the game group "Stranger Things". The group itself ranks #16 in the Pinside Pinball Top 100.

There are 55 ratings (that include a comment) on this game.
Currently showing results page 3 of 3.

I've now owned this game for a couple of weeks and feel like I've played it enough to give an objective rating. First of all, this game has taken a beating on Pinside in the various threads. That seems to be fairly common now on new releases, but the negativity was still pretty shocking. I ordered a Premium based upon my love of the theme and decided to stay the course, despite the negative comments, mostly from people who didn't own the game nor had any real plans to purchase it. I'm glad a stayed in because I absolutely love this game. The sound clips are the best of any pin I have ever owned, and thanks to the modes and features, I feel like I'm more deeply immersed into the theme than most other games. It's a difficult game though and as I'm rating, only at .86 code version. Some have had issues with their Demogorgon's shot, magnet diverter, ramp lock post, and other issues, but thankfully, my game has played well right out of the box. Because of the forward facing drops, the game will divot no matter what you do, so if you can't handle playfield dimples, then this might not be the game for you.

This game is great! Love the demon behind the wall and how cool is it that he eats the ball? The levitation magnet ball catcher is so awesome too. And it’s stranger things! So much fun

Stranger Things the first game to Brian Eddy has designed in over 20 years. The similarities to attack from Mars and medieval madness are apparent.

The Pros:
While I have never watch the show, playing this pinball makes me want to check it out. That’s a good sign for a theme. The layout, while initially showing itself to be a fan layout has a few more things going for than are immediately available to the eye. The in orbit to the right of the drop targets spins around quite quickly to the left or a bit with the spinner, Think of the spinner shot on monster bash. The artwork reeks of those great Drew Struzan movie poster of days gone by. The music and effects in the sound package and quite good. The UV lighting kit is HOT! Very well implemented. The sound design and music on this game is very well done. In fact, I think it’s one of Stern’s best sound packages ever. I haven’t watched the show, but listening to this game makes me want to check it out. The big innovation on this game is the projector in the reflective surfaces that it is placed upon. We saw a bit of this with the last Elvira game in the coding on the mansion that would reflect the different colors projected onto it in relation to the modes within the game. These features act more like the movie screens specifically driving but it’s also on the ramps and the spinner and in combination with the UV lighting kit this game pops out theatrically let you know the game before it. It looks fantastic big ups to the creative minds that conceived and executed this feature. While it may not hold up well under bright lights, in an arcade environment, this effect is absolutely incredible. I love it! And now... the rules, while still a work in progress are quite well laid out. Qualifying the lit yellow and orange modes from the left and right Orbits and ramps are quite well done and offer good scoring opportunities. Multi-ball from the left ramp doesn't offer big scores, but stacked with modes... Yas! Another nod to AFM, the linear inserts telling you how many shots are needed to get a mode started. It seems that there’s Three levels of wizard modes with in that layering of the six modes on each side. When you qualify all four main shots at the ramps and the orbits that’s two modes on either side of the playfield. Once you get all 4 shots and their modes lit, it starts again for a total of three times. This leads to three (mini) wizard modes within the game. The inserts at the bottom of the table give an indication of what attack from Mars brought to the rule set on this game with 5way combos and the like for game rule qualifications. The ramp that lowers to the playfield works as it should. I am very curious to see how this thing will hold up to long-term use and play.

The cons:
The rules are well done and I really like the flow of the game’s shots. However this game feels good when games like JP, Wonka, IM and BK SoR feel great. This game may grow on me with time, but you can’t fix a PF design. The kick out on the left since the ball in a direction that will quite often rebound into the left out lane. While this can probably be fixed or adjusted easily, I don’t like being punished for successfully making a shot on a game. And this is a physical part of the play field design. The stand of target on the far right is not available to be hit by the flippers. While it does bounce around in that area quite a bit, I’m surprised that the fan layout has an upward facing luck shot like this. This game has a plethora of inserts on the layout? How is this game being held together with structural integrity compromised to this extent? Last thing. You'd better make your shots to the right ramp. There is a good chance that it will go sdtm if it comes back atcha...

The takeaway:
This is a Fun game with a fantastic spooky horror theme. There’s a lot of things I like about this table and a few things that I don’t. While I am very happy to have Brian Eddy back in the pinball game, I find that this game in many ways feels a lot like what he designed along time ago for Williams. Who knows what he’ll come up with for his next design? While I don’t love it, I like this game. Nothing is perfect, Especially pinball. So let’s see where the code takes us and what the operators do to make sure this game plays the way it should. Something to look forward to.
8.020/10
1 year ago
JCS

Love the game but not feeling the projector. It looks good on the main screen but poorly on ramps and targets.

jeffspinballpalace edited previous rating on May 17, 2021.

Previous123
There are 55 ratings (that include a comment) on this game. Currently showing results page 3 of 3.