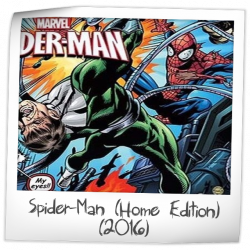 This game has received 3 approved Pinsider ratings. 22 more approved ratings are needed to get a rating and for it to be eligible for the Pinside Pinball Top 100 ranking.

For a home pin, its pretty damned good. Its definately better than Sterns transformers and avengers "the pin".
They addressed certain issues and improved on the Spiderman one.
8.501/10
4 years ago
AJC

I'm really not a modern pin guy, but I liked the idea of Spider-Man Home Edition because it didn't look to be too difficult. This is the first modern type machine I have played or owned.

My opinions will most likely differ from the bulk of this community as it is seen as sub-par to the Pro models, but for me it's perfect.

The cab art, back glass, and playfield art are absolutely gorgeous - actually the same cabinet art and back glass art as the Vault edition.

The machine overall does feel a bit less quality oriented than the pro models, as has been mentioned before, but the gameplay is a lot of fun for me.

There's not really too much variety in what shots to make, which is another thing I like. But the shots that are needed, are pretty tight and leave no room for error. I need to keep practicing.

The Color LED display is kind of clunky, but it works fine and you get used to it. The music / sound are very good as well, and the callouts make it easier to know what to shoot for.

The Rescue MJ captive ball is a great idea as well. It offers on the fly multi-ball, but it's not a shot that you can plan, it's all a matter of luck whether or not the ball falls into the lock. But once the ball is locked, it's a cinch to knock it out and start multi-ball.

One thing I don't like is that if a ball is in the chamber at the end of the game, it stays there for the next game, or in a multiplayer game, if you lose your ball, the next person has the opportunity to knock I out. I wish they would have designed it so the ball kicks out when the game ends or you lose your turn.

The other thing I don't like is that the 2 top bumpers activate together, as well as the slingshots. I assume this was done to keep costs down as another node board would have been needed, but it would have been nice if it was done correctly. The machine is pretty high priced for what it is already. How much more would an additional board have added to the cost?

This is not a high scoring game like most of the modern machines. You won't be seeing any billion scores on this machine.

The machine is very noisy. Not the sound/music, as that can be adjusted, but the mechanical parts, especially the pop bumpers. This is probably due to the fact that the cabinet under the playfield is almost completely empty, except for the Start, ball launch and flipper switches, and the speaker.

Gameplay is pretty intense, at least for me, and the game really is a lot of fun. Some find the playfield to be dark, I do not, it's bright enough in my opinion.

The machine is pretty expensive for the target audience intended, and that is what turns many off, calling it a toy machine. I think this holds up very well against my Xenon and Silverball Mania. It IS a real pinball machine.

There are not too many adjustments in the menus, but what is there is enough of what is needed to tweak the game settings.

Overall, I am pleased with this game, even with what I paid for it. Time will tell how the machine holds up.