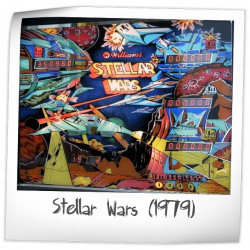 A fun, fast widebody. Very under the radar. Very BIG. Fun shooters game. Spell out "stellar wars". That's about it. Captive ball is a fun shot. Sound is a bit annoying but what can you expect of this era? A good collection pin. Can still be had for a good price. If you have the space. Grab it.
7.067/10
1 year ago
AJC

I believe this game is severely under rated. The objectives are spread thoughout the playfield and there are drops galore and two spinners. Add Lane Change and Multiball to this game and the world would be able to ignore the subpar art package.

canoncitypb edited previous rating on February 04, 2020.
canoncitypb has owned this game in the past.

Was drawn right in the first time I saw the back glass how can you go wrong with Cylon inspired spaceships. a very funplay for it's time.
5.551/10
2 years ago
HAN

For a Steve Ritchie game, this is a very unique title. It's a single ball, low speed, long-shot, widebody. The influence of his earlier work with Superman for Atari is obvious here. It's not his usual thrasher, this is more of an accuracy game, with a lot of drop targets to hit for activating pop bumper scoring and other features. Some of which are nearly full-length playfield shots. Particularly the 'R' target. About the only thing in the play that actually annoys me is the need complete all the inlanes, of which there are 4, to get the 'Stellar Wars' bonus. Though there are ways around this via other rules. Despite being so different from his other titles, it still shows his polish in the gameplay, and you can see the intent on trying to speed it up with 5 pop bumpers in there. Had this game come a few years later with the improved flippers, and more polish to the art and sound, I think it would have shown a lot better.

Playfield and backglass art is an era typical rip-off of other themes, in this case with obvious Cylons and Vipers from Battlestar Galactica. Unfortunately it's not up to the standard of other games in the era, being just before the great work in Gorgar and Black Knight. Though the cabinet art is a notch higher up the scale I'd say. Very trippy overall color feel to it.

Unfortunately, the sound is what I find the most repetitive for this game. Most of the gameplay, for target hits and such, is just fine. Same sound board and core sound selection as Flash. It's the radar pulse sound that gets to me eventually. Particularly when close to completing the bonus. Rather than building excitement, it just makes me anxious with the rapid 'ping ping ping'.

HHaase has owned this game in the past.

Open floaty game that is cool but gets boring quickly.

davideokills has owned this game in the past.

I enjoy a good wide body

I bought this not working for a cheapish price by Australian standards.
It was a bit of a nightmare to get it all going and it still has faults so it wasn't really a bargain at all.
But having said that it is actually a really well designed game that is a lot fun to play. The long shots really require accuracy to score well. Its brutal at times but you can have good balls and there is a real sense of achievement when you complete STELLAR WARS.
I still have to service the centre drop targets which looks really hard and one of the lifters broke from old age so thats going to be fun to find.
Led lights and premium clear rubbers really made a big difference as they help keep the ball moving across the huge table..
I did a full flipper rebuild but they still seem a bit weak by modern standards.
The the back glass and playfield art work is pretty ordinary but I like the cabinet a lot.
Overall I learnt a lot getting this going but be warned, fixing these old machines is not easy and unless you ae prepared to put in a significant amount of time, money and effort or the machine is in VGC I would get something more modern.
Great for a quick game if you don't want to spend 20 mins or more playing some deep modern monster.

Nothing to write home about, Stellar Wars does make a good showing in its class. Lots of stuff to shoot at, and some interesting pop bumper set ups by the outlanes - but there isn't much going on for this table after hitting all the different target types. I saw someone else who understood the rules well put up some great scores, but I still wasn't impressed by the game. Maybe I need to spend more time on it - but for now, I don't recommend more than a game or two on this eclectic early SS.
9.074/10
5 years ago
VMP

This is a super fun wide body machine. There's a lot to shoot for and a lot of fun shots. The gameplay is great and fun but the artwork is a little weak.

V_piscopo has owned this game in the past.

Lots of drop targets on this widebody. Lower pop bumpers make the ball flow and it can be very fast if set up properly.

dalispictures has owned this game in the past.

Stellar Wars is a game that in someways lets you down and in some ways surprises you.

The Pros:
Lots to shoot for and the Saucer right next to the captive ball offers two difficult shots that have to be nailed right on to score. Inlanes are deceptively difficult and require good nudging skills. Connie Mitchell put together another art package that may not be the best rendering, but takes me back to the late 70's right quick. Cylon ships always look way rad, just like they do on my Solar Fire!

The Cons:
This game is the most requires precise setup to offer challenging play. If this game is not properly maintained it assumes the name "Pigs in Space". The least flowing of any Steve Ritchie game (other than his Atari designs). Connie Mitchell's best work with this pax is on the cabinet. I'm curious to know if anyone has "re-themed" this table.

The Takeaway:
Willaims' way into widebodies was headed up by Contact (I may be wrong on this one) which was a wide Space Odyssey/Mission. This game feels like a wider Blackout, which is really strange, because this game came to the arcades before Blackout did. Looking at Steve Ritchie's history of games produced, this seems like the bridge between Flash and Superman. Now Steve Ritchie has words about Black Knight / Flash Gordon and design theft... so who knows what happened in the Williams' halls of pinball. This game has quite a bit to shoot for and this is the only game that he made that has the lower pops that close to the flippers (like Jumping Jack / Old Chicago). I love captive ball and alley shots, they require great skill, but the scoring on these shots are not that valuable (if I remember correctly) so this game doesn't really need them. I get the feeling that this game would have felt much faster (and felt more "Steve Ritchie-like") without them and thus narrowing the PF and making this table a regular width design. As it stands with the extra width and real estate on this playfield, this game MUST be properly maintained. It needs to be waxed, the sensitivity of the switches must be feather light and needs boucny rubbers to keep it as fast as possible. Otherwise this pinball game feels dead.
6.846/10
7 years ago
ZAC

I own this machine, and bought it as a lark--very inexpensive.
Yeah, the backglass artwork isn't the best, but the cab artwork is fine. And yeah, it was a Star Wars rip-off, with ships that look more like they belong on battlestar galactica. No ramps, no multiball, but it's 1979 Williams.
The game is very fun to play, and has very good lastabity. A beginners game for practicing flipper accuracy, as there are several drop targets and mini-goals all over the wide-body playfield. I think it's simplicity and multiple target goals make it less threatening and more attractive to the new pinball player; it gets the most play of all my machines by visitors.

This is a good widebody Williams pinball from the late 70's. Lots of drop targets and smooth lane shots to hit. No multi-ball but so what. A good widebody pin and they can be bought for little $. Too bad the backglass art is so bad.
6.200/10
11 years ago
UFO

This is a pretty good machine,but i absolutely HATE the artwork. The backglass is about the worst i've ever seen.The Star Wars ripoff ships look terrible,the choice of font for "Stellar Wars" could not have been worse and the lettering looks like something a teenager would draw on their notebook.Very amateurish and the whole backglass is too busy with bad color.The cabinet is equally awful while the playfield is slightly better although it has the same poorly drawn Star Wars ripoff ships and is also too busy with bad color.
The game itself plays pretty well for a widebody and has a nice layout.I love the captive ball and kick out hole right next to it-nice design.The drop targets are also well placed and the ruleset is basic but fun.
Sound is typical Williams,not great but not terrible.
Shame the artwork/theme is so pitiful on this machine.Stellar Wars could have been a 9 with nice artwork,but is instead a 7.