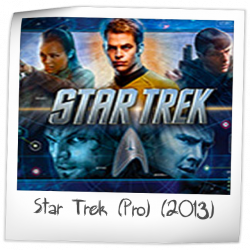 This game ranks 2nd in the game group "Star Trek". The group itself ranks #24 in the Pinside Pinball Top 100.

Note! There are multiple versions of this game!
This is "Star Trek (Pro)".
The other version is: Star Trek (Premium/LE)

There are 248 ratings (that include a comment) on this game.
Currently showing results page 1 of 10.

The art package is a bit so so... think it could have been better, for the playfield mainly...

The game shoots nice, left and right ramps are butter. The one from the top flipper was a bit difficult to get. I like very much the kick back from the vengeance spaceship. The shot behind the third flipper is clever.

Sound is very good on this game. Star trek theme is really great and I like the music when you pass in victory lap mode.

The missions are not varied enough I think. It seems to be always the same. But I like a lot the vengeance modes. The two first one are the best for me!

Overall, a good game but not to have at home too long as it lacks variety a bit.

jultdm has owned this game in the past.

A fast moving machine, a good theme, a little too much Chris Pine for the Trekkies I know, but a game that I love playing. Feels a bit inspired by Attack from Mars, and that's a good thing.

Jeremyczu has this game on the wishlist.

I think this game is great but the fact that sttng is so much older for me this doesnt beat how fun the 90s pin is. I think they have done really well with the pin and layout with the lights and everything going but the movie for me as the theme is never as good as the classics and ruins my enjoyability as i cant relate to the shots and voices as much as the older pin, great game but rather the 90s version
7.394/10
85 days ago
EWB

I had the opportunity to play this pin at Pinballz in Austin. Theme was well executed, has some nice shots & call outs. Music is part of our popular culture, & well integrated into the game. I enjoyed playing this much more than I expected I would. “Just one more game…”

Another of the better modern Stern tables. And there seem to be a lot of them on market so it's a little more affordable right now. Playwise it's perfect with lots of shots and flow and a deep rule set. But I had to take some points off for the photographic art work (I love star trek, but let's be honest, the remakes aren't as good as the originals, I don't need to see those guys heads in my house all day) and the strobing flashing lights. The game is almost too hectic at times and I'm afraid the callouts would get annoying after awhile. A super fun table to play, but not my personal choice to own purely on aesthetics.
8.160/10
3 months ago
WWW

This is a game that is definitely on my wish list. I've played it several times and still seek it out whenever possible. I was never a HUGE Star Trek fan but more of a casual one, however, I love the way they maintained the original theme in this pin. The sounds add a great deal to the escalating excitement when you have a good ball or game. Well done.
7.263/10
4 months ago
???

Fun game with a good rule set. Some challenging shots that are very satisfying. One minor criticism--the flashers are way too bright! Love hitting the warp ramp many times in succession.

This was the first 'modern' pin that I got a chance to play and it is pretty awesome!

I am a Trekkie so I might be a little biased on this review but I think it is a great playing pin! The callouts by the actual cast of the movie is a huge plus and the multiple missions to choose from is even better! If I wasn't planning on getting a Star Trek: TNG one day, I would definitely be considering one of these to add to my collection.
7.251/10
8 months ago
MAT

Kind of a sterile game. Underwhelming art throughout, lazy DMD animations, recycled audio from other games. I don’t really have fun playing this one.

I don’t understand why so many people feel this is better that Star Trek: Next Generation Pinball. It’s got a lot of the same ideas, but while the gameplay is stronger, everything else feels weaker.

Designed by the same person as STTNG, it’s faster gameplay with more animation and variation. But it just lacks the magic. With STTNG, it's recreating classic tropes from the series. In this one, the modes are all forgettable moments from the 2009 film. Destroy the Drill? I don't even remember this scene. Space jump? Sure?

Also, STTNG playfield art is classic, this is just plain clean graphics. It's so boring.

The flow of this one is drastically better, but everything else is worse.

Fun pin, found myself enjoying several games and challenging. Playfield art gets the job done, but nothing mind blowing. Dmd video is humorous to me, would have preferred likened images of the characters from the movie, but I think they did very well with it otherwise.
8.068/10
1 year ago
SAH

Flow monster! Gimme those fast plastic ramps and some warp shots all day.
9.460/10
1 year ago
KMA

I love how this game plays. Its flow is really second to none, the shots can be a bit easy for good players but it doesn't take away from the fun at all (almost like MM in a way). The rules and modes are simple, straightforward and easily figured out. In my opinion one of Richie's best games. Still a game I come back to over and over again. Only drawback is the playfield artwork is a bit on the unimaginative side.

Amazing game, fast paced, animations music and callouts make you feel like you are in the movie.

This is on my 'need to find one for home' list. I've played it out in the wild many, many times and am always a sucker to load in another dollar (or five) before leaving. Would love to have the Premium or even an LE, but could be more than happy with a Pro at the right price
7.905/10
1 year ago
PGR

Has to be the smoothest shooter ever made. The ramps seem like they're made of ice. Except for the Warp ramp, the other two appear to have a lower profile than your average pinball ramp, so almost anything you send at 'em is going up and around. It's a great idea I wish more tables used. The layout is fine otherwise, but it's stuff you've seen before. The center drop target to scoring (and kick-back) area under the ship is AFM-like, the shot behind the upper flipper is a neat idea (something Stern would re-use for TMNT about 6 years later), and I like both the saucer and spinner shot on the left. It's a great shooting game, hands down.

And while shots are the most important thing, the praise runs out there. The light show is pretty good yet seems stuck in the past compared to WoZ of the same year, the art in all three areas (playfield, cabinet, backglass) is bland and cookie-cutter, and the call outs are weak considering how much they had to work with. The rules are fine, but a bit on the simple side. Play five games of this in a row, and four of them will feel alike.

It's a game that does one thing really well, and thankfully it's the most important thing. Beyond that, though, it's lacking.

Unlike most people, I'd have to say I liked the movies this pin is based on; though I have to say at the outset the artwork/translite and callouts lack creativity and passion. The best part of this pin is the gameplay itself: it's fast and furious, has AMAZING combos (the shot on the upper flipper feels awesome), and the rules are deep but easy to understand. The ship at the center of the upper playfield is fun to hit, though, given the theme, I do feel the game could have been spruced up so much more with more toys and figures on the playfield (no young Spock?). Overall though, a super fun pin, as justified by its top 20 ranking.

PRUG edited previous rating on July 19, 2021.
PRUG has owned this game in the past.

I love the way this shoots and it is sort of like a modern day Attack from Mars! Good use of lockdown bar button and the counting of the warp shot is genious!
9.172/10
1 year ago
GJM

This game is an absolute flow monster, and the speed is unmatched. The art isn't the greatest, but if you're looking for a game that will keep you on your toes while hitting combos you could only imagine - this is the game. I will say it's the best pro model of any Stern game i've played to date, hands down - If you're on the fence about losing some extra lighting and a difference in wireforms, don't worry the pro is a fantastic buy.
A blend of Attack from Mars with an amazing upper flipper to warp ramp, almost every shot is makeable from either flipper if you like to backhand - seriously this game will have you coming back for more all the time.
7.844/10
1 year ago
AND

wizardofpin has owned this game in the past.