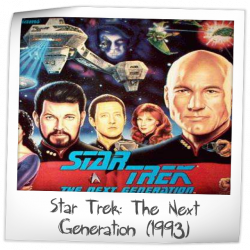 There are 455 ratings (that include a comment) on this game.
Currently showing results page 7 of 19.

One of the best examples of theme integration I've had the pleasure of playing. I easily immersed myself into the theme and really enjoyed it.
6.973/10
6 years ago
OCD

Star Trek will always be in style with some one. Lastability, and theme check, but the game play was all over the place. Just a disaster to keep track of purpose of what shalt when and where...but I suck and have no skill so... I will re rate when I get better
8.012/10
6 years ago
AMK

One of the hardest tables I've ever played... man is this a tough one. It seems like the table mostly requires you to hit the center shot for a good portion of the missions, and it's just a tough one to hit. It's doable with the left flipper, but I honestly think it's not possible to hit with the right, which makes it difficult to do well on missions -- especially since they don't give you a lot of time to get them done. I haven't played this machine a ton of times, so I have some more work to do, but as of now, I absolutely love the theme (despite knowing nothing about Star Trek and being a Star Wars guy), sounds, look, and all of that. What I don't care for is the steep, steep learning curve that this table has. ST:TNG is incredibly rage inducing, and balls seem to love shooting out of play on it. To make things even more tricky, this is a super fast playing table. Kudos to you if you can get a massive score on this table, it's a beast. Despite the fact I'm horrendous at it, I have respect for it.
3.652/10
6 years ago
SCL

I want to like this game. I'm a huge Star Trek fan. This machine however, does nothing for me.
The theme is completely flat, they could have done so much more.

The machine is a bear to maintain and work on plus, it in no way is worth the going price on here. There were over 11 thousand made, hardly a rare gem.
9.560/10
6 years ago
CSC

There is a lot to learn about how to play this game.

I break this machine down into 2 different categories when it comes to rating it. Playing it and looking at it. I find the look of the machine (cabinet & back glass) to be on the average side. I find the playfield (design & playing) to be outstanding. We will never see another machine designed with 2 cannons and subway system as intricate as this. I'm really not a fan of wide-body games, but this does not feel like I'm playing a wide-body game. One mod that I think everyone should do,is change the pop bumper caps to clear and put a color changing LED in there. IMO, it fits the playfield so much better than the standard red caps. LED lighting on this game really makes the playfield pop too.

As a big STNG fan, I played the crap outta this one when it came out.
The callouts and music are fantastic. The playfield and rules are in the “easy to learn hard to master” sweet spot.
The only part of the table I have a love/hate relationship with is the torpedo cannons. But that’s on me. One game I’m a marksman, the very next, I can’t hit a bear in the ass with a bass fiddle.
Still the best Star Trek machine to date.

Quint edited previous rating on July 16, 2015.
Quint has this game on the wishlist.

This is my favorite game. The theme just hits home for me as it brings back the good times while the series was on tv. Many modes and strategies for improving your score.

This is a deep game with lots to do. Lots of ramps, skill shots, loops and holes. Another great Steve Richie wide body game. The theme based on a popular series is great. DMD animations are good and ColorDMD makes the color DMD for this popular pinball game which I put on mine and it stands out even more. This game has last ability. A keeper for me.

colonelmikey has owned this game in the past.

The outlanes are way too aggressive for my taste, once you've had some serious practice, you get used to them, but this game intimidated me as a beginner for a while. Other than that, this game is near perfect.
7.664/10
6 years ago
ALX

Love the wide body. Gameplay is fun and lots to shoot at. Beautiful game to look at. Starting to feel a little dated compared to some others of the same Era. Last ability is there though.

I know there are a lot of star trek fans out there but this machine is over rated. Other than the two cannons there is nothing special about this machine. art work is terrible and it is just not fun
7.676/10
6 years ago
CAT

very cool game although not as fast as some others of the same era like shadow and bsd. it makes the cut along with 4 or 5 others in my collection

rcbrown316 has owned this game in the past.

I'm not a Star Trek fan in the first place, and this game doesn't do anything to convert me. This game loses points for having modes that are best timed out, and for being too simple in multiball; The first time I played on in recent memory, I got two balls on the right flipper, and shot the jackpot shot a few times in a row with the left flipper, which was extraordinarily dull.

It's worth noting, there may have been a switch error on the one I've spent the most time with, so I may be missing something,
9.380/10
6 years ago
DMG

Not long ago my rating for this game would not have been nearly as good, but I have come to appreciate just what an amazing achievement this game is, truly a classic and Steve Ritchie's Magnum Opus. A stunning integration of art, sound and theme, to create a sci-fi world under glass.

This is the best pinball machine which I have ever played. That is very pity that there are no bulbs who will show you which Neutral Zone mission you will play but this machine is really excellent! I can play it still again.

Great game. I played one with Laser sights and color DMD so I might be a bit biased but this is a great machine. I am partial to the theme too...

paynemic has owned this game in the past.

The SuperPin games are generally fantastic and Steve Ritchie's is one of the best. The playfield is just jam packed with shots that work for all three flippers as well as the two cannons. In terms of layout it's absolutely one of the best designs ever. The code backs it up too with lots of missions and multiple multiball modes. As a Star Trek fan, I love the callouts with "Thank you Mr. Data" being one of my favorite in all of pinball.

The cannons aren't overused despite there being two of them (unlike in T2, for example). The subway is used effectively to bring balls that go into holes immediately back into play. There's really little to find fault with in this game, it's absolutely deserving of a top 10 spot. The left outlane is brought up a bunch by detractors but the game in general doesn't feel drainier than any normal pinball game.

I'd say this game is more complicated than Twilight Zone...

Pros:
- a lot to do; there are missions, skill shots, a lot to keep a player busy
- lots of ramps and habitrails
- an even greater amount of skillshots, holes, loops
- the probe launching devices are absolutely stunning
- widebody (I'm a fan of WB games)
- themed on a great series
- great DMD animations
- the Asteroid Field mission!

Cons:
- too complicated; the complexity of this machine can be interpreted by players as a pro or a con, for me it's the latter
- the playfield artwork could be improved, I don't like it
- sound variation could have been better
9.840/10
6 years ago
CNY

Love the flow for a wide body pin

Deep lots to do

I've owned this game for several months and still enjoy all of the variation this wide body has to offer. If you are new to the game go to IPBD.org and learn about all of the fun stuff that is available on this game. This is a keeper in my collection.

The machine it self is pretty good lots of toys. Multi ball on this game is one of the best. Next to MB.

Disclaimer, I am a fan of the widebody series, and this is an all around fun game. Bright playfield with a ton of shots. Lots of ramps and cellar holes. I like the fact that as soon as you hit a cellar hole, a ball is ready to be shot out. My buddy had one that I really enjoyed and never got tired of.
PreviousNext1234567891011121314151617... 19
There are 455 ratings (that include a comment) on this game. Currently showing results page 7 of 19.