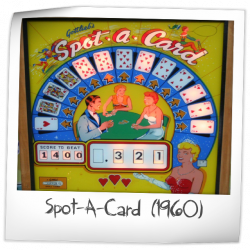 This is a game that slips under the radar but boy does it rule in the playability factor.

Spot all the cards and there is a rollover special on the playfield. Once all cards are lit on the backglass, the rollover special stays lit for remainder of game. On rare occasions you get them, the knocker goes whack, whack, whack! The A, K, Q, J, 10 can also be spotted through upper rollover, controlled by the passive bumpers.

And then there is the score to beat window. Mine is set at 1000 and boy, is it hard to achieve. This is a true players and nudgers game and the game must be dialled in perfectly or it will eat you for breakfast!

There are different strategies to beating the game on replay. Getting the ball in the KO holes scores 20 points and it is possible to bump it across to the other KO holes. There is a single gobble hole of 200 points and sometimes it can be great to collect as earning 200 by keeping the ball in play is hard.

Also unlike later em's the pop bumpers are critical to the game. They must be lit by going over upper rollover while it is lit. They then score 10 points as do the slings. Time to really try and rack up the points.

While playing the ball constantly flirts with the outlanes and it is a perfect game to learn how to nudge.

Backglass is nice but artwork on playfield is very nice and when lit up in the dark it is lovely.

This game has been a surprise package as it is one of the very best em's I have ever played. Perfect for home use as most times it will kick you hard but you keep coming back because it is possible to get good scores but boy you have to play well.

A VERY under-rated game that slides under the radar. Everything needs to function optimally to enjoy this game. And for 1960 it is surprisingly quick.

I nearly sold this game because it is too hard. When it arrived it was on hi-tap and 6.5 degree pitch. Unplayable. Kept adjusting, normal tap etc. One of the features of the game is being able to nudge back into KO holes. This game must be set up correctly. I now have it at 3.5 degrees which is as per Gottlieb manuals. As an experiment I even went down to 2.8 degrees and the game became easy! The importance of setting a game up correctly cannot be underestimated.

Shapeshifter edited previous rating on December 24, 2015.
Shapeshifter has owned this game in the past.

A cruel game, a random game, a maddening game. The rules are imbalanced, the layout is annoying. The game mocks with the nearly impossible to overtake "score to beat" displayed on the backglass. This game causes rage like no other.

It's awesome.
1
There are 2 ratings (that include a comment) on this game. Currently showing results page 1 of 1.