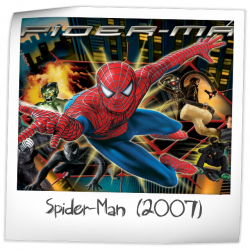 There are 407 ratings (that include a comment) on this game.
Currently showing results page 5 of 17.

I didn't really ever want a spider-man, or a stern for that matter - but saw one at a good price and was aware of how much people like the machine so....err...well...
I love it. It's ruined other machines for me though as they now feel slowwwww - spidey is flippin fast, the ramps are really well placed *slight/complete copy perhaps of AFM pop bumpers/sandman-mothership/bouncy green things and all but i'll let that go*. Doc Ock is good and the multi-balls are good - balls don't always get in each other's way as there's loads of different shots to send them to.

The artwork's pretty ugly with straight-from-the-films plastics etc and the animations are properly rubbish though i quite like the multi-ball one. May be a good thing though as i'll never feel bad about modding this.

I would say though that everything feels cheap. You feel like pretty much anything could break at any moment, which may just be a general Stern-of-this-era thing, but it matters. Also, there are loads of places where the ball can get stuck. I put tape in several places and even a whole pinball behind the Venom figurine. Good fun though.

Update: Went back to Spidey after years away, got an LED ColorDMD, the animations are now actually pretty good - I think this is a great mod for Spider-Man. Put some mirror blades in it too which are always great. Still think the game feels flimsy but it's much nicer now.

Surprised at how good this game is. Super fast, yet deep enough to keep you coming back. IMO its got something that ST lacks despite a similar layout.

cooked71 has owned this game in the past.

Fun Steve Ritchie three-flipper layout, but lacks a good 'hook' IMHO. Rules are a bit too deep for must to understand, Sandman center arrangement gets old and Doc Ock is notorious for rejecting perfectly placed shots. I do like the combo encouragement and a lot of the rules, but I find GG and Venom confusing. Pretty fun gameplay overall though... not a drain monster.
9.440/10
6 years ago
MRZ

Very fast pin, nice machine to keep when you are short with pins in your gameroom. Also nice to have when your gameroom is full of pins ????
It's a top 10 pin, no doubt about it !!

great looking game. love the theme, lighting, color scheme, figurines etc. sound was tinny, gameplay was too long per ball and repetitive feeling to me. as I understand it it's just how stern machines of this era feel. just didn't stack up against my B/W games with regards to wanting to play another game. I just wanted to finish then move on. sold it in 9 weeks

rcbrown316 has owned this game in the past.

Another outstanding pin from Steve Ritchie and Lyman Sheats. Really has a great feel to it - lots to do with excellent variation in shots with differing objectives - so much more than just shoot for the blinking lights. Good for players at all skill levels. At first I was not really getting it, now that I have played it a bunch I totally get it. It is a great game with a lot of challenge but not impossible to get deep into the game and potentially even complete the objectives. It is my go-to pin.

NOTE: Now with COLORDMD, this game is just outta this world. An all-time great for certain.

I have nothing bad to say about Spiderman

Game is alright. More hype than necessary in my opinion. Not a keeper for me.

Meegis has owned this game in the past.

Loved this pin. Would have back in my collection anytime.

Would love to add one. Come on vault edition!

Speed has this game on the wishlist.

Amazing game currently my fav pin in my collection of 16, great fun to play keeps you coming back for more sterns best pin in my opinion!

Great layout, lots to shoot for. Great rules to keep things interesting. Great sound (I love the new take on the old spider-man theme song!). Pretty good playfield and cabinet art. Most important of all though, it is fun!

The only thing lacking on the pin is the DMD animations are poor. Scenes taken directly from a movie do not translate well to a DMD. I would prefer custom animations.

I was able to play at the Expo in Chicago and this was the pin I always wanted to come back and play.
I think banging away at the Sandman created the initial appeal but this was very fun. I love the look and play of this machine.
I would like to own someday and probably should have bought the one for sale at the Expo. I can see why this is so well liked.
7.714/10
6 years ago
RAP

Spider-Man is fun to play. It has good flow with lots to shoot for.

This was my first pin and now I'm spoiled. If you keep making shots they all link together. I changed just a few lights out to LED's and colored lights to brighten up Green Goblin and Venom, but that was just a personal preference.

Fun all around game - great flow, satisfying shots, and good multiball options. Not my favorite theme but still pretty cool.
8.431/10
6 years ago
THI

An excellent classic Stern, one of the oldest im my collection and it won't leave soon. Note that it has more or less the same playfield and flow than a Star Trek and by todays standards it would be a LE with 3 ramps and 3 toys on the playfield...... the animations and some of the music could be better though. Digitalized scenes from movies are not good on a 128x32 dmd with 4 shades...
8.905/10
6 years ago
DEB

Awesome game. Similar DMD traits to Tron and IM. Live the toys and villains and a fun game to mod. Like the upper flipper shot and always enjoy a nice center shot a la AFM. Hoping to get one soon.

Spider Man was a game that was criticized early on but quickly became one of the highest rated. This game combines great mechanical toys, magnets and smooth flowing and fun ramps, a third flipper and amazing lighting, music and voices which all combined result in one of the most fun pin games you will ever play.