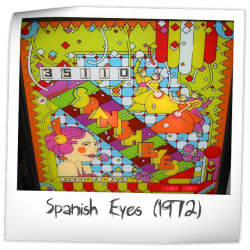 Fun game to play, but the theme and back glass are horrible. I dont know what Williams was thinking when they created it, but again it was the early 70's.
1.085/10
2 years ago
MJG

The bright, blocky, stylized art of Spanish Eyes pops out -- fitting, as this playfield "pops!" Many find the art style to be a turn-off, but, opinion on the backglass regardless, this game is more than worth a try. Working to add balls by completing the upper lanes or by hitting the five star standup targets is made all the more interesting by the pop bumper placed between the flippers.

This pop bumper adds a layer of excitement and intensity to what would otherwise be straight-down-the-middle drains, with the ball rapid-fire ricocheting in tight quarters and, with a little luck and a little skillful nudging, bouncing up towards the flippers instead of rocketing down to the outhole. The pop bumper is what sets Spanish Eyes apart as a game, making what would otherwise be a fairly straightforward, fairly enjoyable game into an immensely fun machine.

This game does not look appealing. It has no flow due to very odd layout. I am not sure how it rates as highly as it does here but to each his or her own. It is one of the few games I refuse to play out of choice. The game is basically a pachinko machine with flippers.
10.000/10
4 years ago
MPW

Michaelxwhite has owned this game in the past.

Love this game, one of the best EMs. Center pops are always great, and Spanish Eyes may be the best of them (still need to play a Freedom). All the pops are nice and powerful (DC) and it's satisfying just listening to the reels click as the ball goes crazy. The constant weighing of your options (go for more numbers, collect the numbers you have, or go for the loop) is great, and I love the risk reward once 1-6 lights the loop for an add-a-ball. How many more 6k collects can you manage on ball 5 before cashing in?

Pretty standard fare from Williams here on Spanish Eyes. However, the first time I played the game the ball made a perfect 360 bouncing around the pop bumper between the flippers and bounced back into play. I was hooked! The art package is love or hate...I love it. Its different that Marche's pointy people he put on most of his games. The center horseshoe and kickout hole are where most of the points are generated. Game can play very fast and controlling the ball can be difficult, given a properly adjusted center pop bumper and a fresh set of rubbers. The game is definitely more fun on add-a-ball rather than replay. Single chime is a bummer...it sounds tinny and weak. All in all, I perfer my EMs to be Gottliebs but this game is by far my favorite Williams EM.
7.603/10
7 years ago
TWV

A very unique looking and playing pin from Williams in the 1970's. I owned this for a number of years, and it was quite enjoyable. It is best to set it on "add a ball" for the specials and replays. Pop bumper between the flippers makes this very different to play, and that adds to it's appeal. I for one like the back glass art, as it looks like a Peter Max poster from the 1960's. I would have kept it if I had more room.

AXrelay has owned this game in the past.

By far the most fun EM machine I have played. The pop bumber between the flippers is really cool. I like the artwork myself and the sound is just average. Good ol' game not to be passed up.

One of my all-time favorite EMs, unique layout with a mushroom bumper between the two flippers. Takes a bit of time to learn, but very fun once you start to nail the shots and get good at adding a ball.

juster has this game on the wishlist.

Spanish Eyes is an unusual game in many ways. Fortunately, I think that this unique game looks and works quite nicely.

The Pros:
Christian Marche proves once again that he is the most versatile production artist in the pinball world. No other table looks like this game. Some people think this game is ugly. I think that the images on this table fit the theme perfectly. Different strokes for different folks... Norm Clark took a simple idea and made it work using a bumper between the flippers. I've saved many balls with a little push here and there. Nudging skills are king. Trapping the ball is near impossible. Drop catch skills are mandatory. The horse shoe shot is tricky.

The Cons:
The spaces under the flippers eat up your mistakes. The saucer seems to be hit by bounces rather than shots. Rubbers, flippers and pops must provide proper action or the game will feel dead.

The Takeaway:
There is no middle ground regarding the opinion of this game. People either love it or they hate it. Personally, I love it. For a unique and bright visual and pinball experience, this table is one of the best out there from any era.

Update:
You gotsta' light the pops to make this deck sing. That means every shot from the plunger has got to pass over the "On Bumpers" rollover just under the top of the arch. The saucer can be generous, the saucer can be your enemy. Fully lit at 3k, it's good points, but I have had that ball head straight towards the lower pop bumper too many times for me to trust it. My recommnedation... stay away if you can. The loop is even more dangerous. Even when lit for 5k, I'd rather not shoot for it. Like I said, light the pops and keep that ball up there as much as you can. The space underneath the flippers gives new definition to the term "flipper bitched". Keep those bats down unless you absolutely need them! A very different pinball game that when properly maintained, gives a heightened sense of stress and urgency during play. I like it!

Pretty good game play for a 1972 e-m type pinball machine. Sorta fun to play a few games when you see one. Colors on artwork not my fav. Lighting ok, but nothing spectacular. Classic sounds are good of course.
6.886/10
10 years ago
XOT

If you can get past the bizarre backglass, this single player add-a-ball EM is quite fun to play. A well laid out playfield with plenty to do. Light all the six stars for major points at the saucer, and for a special when making the horseshoe shot. Plenty of rollovers to aim for, and an unusual arrangement of a pop bumper between the flippers.

Outlane-Avoider has this game on the wishlist.

I actually own this machine and picked it up for very cheap and in decent condition after finding it on CL. Spanish Eyes (Granada) is a one-player, 5 ball machine. Scoring only goes up to 99,999, which I find a very nice feature, since it allows the player a fair opportunity to work toward rollover.

With EM games, I'm always looking for that something "special" that makes it more attractive and unique. I really love the mosaic artwork on the playfield and backglass, which help give the machine a lot of character and make it really stand out to visitors. Even as an early machine, it has a skill shot that allows you to light all of the pop bumpers and raise them from 10 to 100 points. Six targets (3 on each side) also line the side of the machine and light up across the bottom of the playfield as you earn them. Lighting each of these targets activates the special, which can be earned by shooting the kick-out hole in the center of the field. Surrounding the kick-out is a nice horseshoe, which has a rollover worth additional points when targets are lit.

There are 3 pop bumpers located at the top of the machine: the center one worth 100 points and the other two worth 10 points (unless lit). However, what makes this game really standout is the fourth pop bumper located in the drain. This bumper is also worth 10 points (unless lit) and with the drain being so tapered, the ball is allowed to bang against the bumper and the sides of the drain, which often causes it to return to play (which of course my wife and kid, less experienced players, love).

Spanish Eyes (Granada) is a fairly rare EM and should be picked up if you come across one for a decent price.

singlebanana edited previous rating on August 16, 2012.
singlebanana has owned this game in the past.