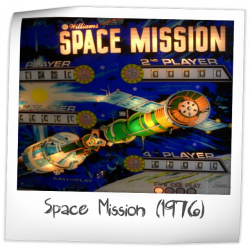 Fun Space game marking the collaboration between USA and Russia. Cool swinging target and ball launching kickers next to the flippers. Th U turn is a fun shot as well. Great back glass art.

Space Mission/Space Odyssey is a two pop bumper game with some good features including a pretty good spinner to rip while returning the ball to the top of the field, a swinging target that will often lead to a drain if not careful, kickouts behind each flipper and an advance bonus horseshoe. The art is pretty nice though the playfield has more of a 1950s science fiction vibe that the 1975 Apollo-Soyuz mission the pin is designed around. BG is quite nice and integrates the theme well, as does the cabinet.
8.449/10
12 months ago
JAY

This game has a surprising good flow. Load your bonuses then hit the left spinner run to score big! I like the moving target and “U” shaped round about . A classic Williams machine with classic Williams reliability .

I must admit that the bunkers behind the flippers seemed strange at first, but after a while it becomes a cool effect. Space theme is very cool with very good art on the back glass. Game does not get the credit it deserves for being an optimistic Cold War statement piece with Four player capabilities AND extra ball. I am a fan.

It's a Mission, in space!

With a very simple moving target, and a loop in the corner, you can feel like a master as you add up your bonus. The backglass is based off an actual picture taken long ago, and i can't help but feel a nostalgia for the machine.

I'd advise as a history buff that you should look into the history of the theme before adding it to your collection.

Yet, it's built for score, with no real objective. Its up to you to make up your own story. I like to think you're furthering the ship on its journey to the stars, or protecting the little astronauts on the sides, as a personal examples.

This can be daunting for most, so i don't recommend if you're looking for an interactive session.
9.308/10
1 year ago
DJP

Tons to do. Beautiful machine and the playfield colors are awesome. Sights and sounds all work together. Not the hardest pin to beat but it keeps you interested. It’s just plain fun. You just have to play it to understand how fun it is.

I'm not crazy about EM machines, but Space Mission is one that always kinda stuck with me. I played it at a pinball show a few years back, and stumbled on one for sale cheap a few months ago and picked it up. I think this is a decent 4 player game, and the swinging target in the middle is oddly satisfying to hit.

RoxasUrSoxas has owned this game in the past.

This is a fast EM with lots of targets and bonus points available. It has a swinging target in the middle. William 3 bell tones keeps the sound nice when scoring. Great example of the top of what EM can be. I enjoy this game.

halffast edited previous rating on April 05, 2018.
halffast has owned this game in the past.

Love this pin, it is without a doubt my favorite em. More complicated than most rule sets, but straight forward, a left side skill shot which is not easy with the kick outs next to the flippers which make it difficult to set the shot up. When played on 3 ball, its difficult to consistantly break 100k. The center target is a suckers bet, it will drain you if you deliberately go for it. Build your ladder instead and hit the side kick outs for 2x points. The occasional bonus ball is the key to a high score.

Good game. I think that I am not a fan of those kickers behind the flippers and that gets a negative mark for lastabilty.

QuietEarp edited previous rating on January 29, 2017.
QuietEarp has owned this game in the past.

This was my first PIN and though I have a sentimental attachment, I’ve resisted the urge to sell it even though I could use the space. I keep it because it’s just a fun pin to play.

The historical theme is probably lost on many, but I believe it commemorates the first time the USA worked with the Soviets jointly in space. But the artwork is still really beautiful. A lot of these games have flaking paint on the back glass from the incandescent bulbs. Mine wasn’t too bad, and I have LED’s in the back box now to prevent further loss due to flaking. You can buy new back-glasses for this pin, but mine is still in decent shape. I’ve seen others that are a lot worse.

The moving target was not a new concept as Williams had used it before. The kick-outs, again not a new concept, on the fippers are great in the sense that they aim right for the moving target. However, they can also be a hindrance if you are like me and prefer to catch the ball on your flipper to set up a shot. This does make it a faster paced game. For a long time I had the Space Station and my ’72 Bally Fireball side-by-side. Most of my friends preferred playing the Space Mission over what is arguably one of the most iconic EM’s ever made.

It is not a complicated game and it is not a difficult game. I have mine set to give extra-balls on specials and that is generally fine. Once you go over 100,000 a light comes on noting the accomplishment, but if you go over 200,000 there is no such light, though you can continue to earn extra balls.

Another good thing is parts for this machine, such as tune up kits, solenoids, plastics, etc, are readily available. I had a few broken pieces of plastic on the playfield when I bought the table and was able to get a brand new set on EBAY. I also bought a tune up kit to replace the rubber rings and I replaced the regular lights with LED’s. I give it a good polishing every few months and overall it looks great and continues to play great.
7.977/10
6 years ago
DAN

Loved the layout, shots were very fun. Love the way the flippers are set up. Easily the best part of the game, really liked how they fired back up at the moving target...which is also very cool. Theme could have been done better, backglass is kinda lame but otherwise a great game. Wouldn't mind owning some day.
7.296/10
6 years ago
ATE

Space Mission was fun for the time I played it. The design and moving target were very cool, but other than that, there wasn't a whole lot going for it. Still, it was worth playing, and I'd like to try it again someday.
8.286/10
7 years ago
GM

This game felt different back in 1976. A solid and interesting rule set, but mind that centre target as it will inevitably drain your ball. The artwork is good and very different from the usual Marche pointy people. Quite an important game as the cold war was rife back in the mid seventies and the threat of nuclear war still loomed. Overall a good game, worth playing lots and also possibly worth owning.
7.746/10
7 years ago
DAN

This is one the only Williams EMs that I wish to own. I like the moving target in the center and the ball kickouts that are built into the sling shots. The game is easy but fun. This machine pops up for sale everywhere like roaches in a condemned building. I used to play this machine in the early 80's at my next door neighbors house. This was one of my first experiences playing pinball as a small child. For that reason alone I must own it.
9.211/10
7 years ago
MTA

The first time I saw Space Mission, I knew this was a game I'd love. The backglass is awesome, but kickers next to the flippers? Now that brings ball handling to a whole new level!

This is a fast-playing Williams entry with several cool shots to take, all giving that certain satisfaction when hit. The swinging target is where most of the game is at - but it's a dangerous shot.

My only complaint about Space Mission is that there is no way to collect the bonus without draining.

Simply put, this game is a classic!

Pros:
The slings keep the ball away from the flippers. See my review on Lucky strike about this in combination with the saucers on the side of the pf. The sucker shot is the swinging target. Classic risk vs. reward strategy. Personally, I like to light the spinner and get that baby turning. Christian Marche is remembered for the pointy people, but this package is another masterpiece in a style that he is not as well remembered for. Light and rip the spinner!

Cons:
It can be a repetitive and there are some lulls in the scoring that require you to wait for a certain target to be hit to advance the center scoring to the next desires position.

Takeaway:
A good game built on classic design and rulesets. This game must be supplied with fresh rubber sets to keep it challenging. Considering this game came out in 1976... it was and still is fun-fun-fun!

Dunno what the hubub is about this game. Gradeschool friend had one in his basement.
1
There are 17 ratings (that include a comment) on this game. Currently showing results page 1 of 1.