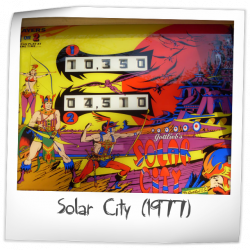 I really enjoy playing this game time and time again. Solar City in my opinion is not as attractive as a El Dorado, or Target Alpha. Solar City is a good player with 15 drop targets that keeps you wanting to play more to get all those targets down!
It will be in my collection for a long time, if you find one for sale consider purchasing it.

Fun machine but once the targets are down there is nothing to really shoot for. Just wasn't a keeper for me.

dpapclare has owned this game in the past.

The same layout as El Dorado and Target Alpha, this time in a two-player version. Unfortunately the artwork on this one is not nearly as nice as the other two versions but it still has that great gameplay and usually is much cheaper. If you love drop targets then check this one out.
7.321/10
4 years ago
RHO

Same layout as El Dorado, but doesn't pack the same punch as the classic wedgehead. But THIS game is half the price. So its a trade off. The El Dorado layout proved so popular it re-appeared later in the decade as Solar City and Target Alpha. Gone are the roving bonus “spots” of El Dorado, replaced by the bonus count at end of ball for each drop downed. Not as exciting having the chase of the spot removed, but it sure is fun bashing fifteen targets on the playfield to grab a big bonus and a possible extra ball (adjustable setting permitting). My Target Alpha review will be the same, as the game are the same, however, I prefer the artwork of the future-past Solar City more than the futuristic Target Alpha. Also, Solar City has less switches to mess with since its a two-player, and its the more rare version of the two, so its got that going for it. If you want a great looking game with legs in a smaller collection, but don't want to shell out El Dorado prices, Solar City/Target Alpha is a viable and more affordable substitute.

Finally own an iteration of the most used PF layout. Don't know why they changed the art from Target Alpha, which I like slightly more. Tough game. But once you learn the shots, the flow is incredible. More Krynski genius.

Ok game, not as good a ruleset as it's single player cousin that started it all El Dorado. Can be a bit of a drain monster. Suffers from shallow goals vs. the single player ruleset.

stashyboy has owned this game in the past.

This is possibly the best EM PF design that ever came out of Gottlieb, ever. This game is the multiplayer version of El Dorado is a great layout with a lesser (due to more than 1 player) EM ruleset.

Pros:
The shots! the way the game opens up from the flippers to the top of the pf with 10 drop targets to shoot for. A shooters game if there ever was one. Those upper left and upper right targets at the ends of the 10 target bank are player's shots from the flippers. This is what Gottlieb was known for in it's heyday! This game has to be played with friends, it's the best way to get the most out of this table. A lit lane on the upper right skill shot that takes real skill. Nudging properly is required as well. You have to do it to keep the ball on the table... as the outlanes and the space between the flippers eat up pinballs like there is no tomorrow. If you can roll this game... your pin-fu is very strong! The artwork looks fantastic. Strangely, I have always wondered what made the character in the lower right hand of the BG look so sad.

Cons:
I own used to own a target alpha... now I really want to play this table as well. I would not settle for a multiplayer version of this deck in my collection, but I would like to play one some more. Lyons Classic Pinball has an El Dorado on location. After playing this single player game... it is funny how a single player can just be so much better than a multiplayer game. I have never known a game to go from Wow! to yawn so quickly. It's a good thing that it's not easy to get all the targets down. Once all the drops are knocked down, this game falls flat on it's face. There is NOTHING to do other than try to get the ball to run down the table's lanes on the sides of the PF. Now most players would never be able to get all the targets down in a single ball, so from an operator's perspective in the 70's great. But from a collector/player's POV, not so hot.

Takeaway:
A truly classic game... They made over 18,000 copies of this PF design with different graphics/ rulesets and even made a SS version. This is a really good game until you drop your last target. Then you hear the sound of a tire losing air somewhere in the distance. I am now looking for an El Dorado. maybe even the 1984 update El Dorado, City of Gold, but I have never seen or played it... so we shall see what happens.
6.212/10
8 years ago
STB

I owned this machine for a few months, and although it looked like a good game, it seems to suffer from the "one track mind" Gottlieb seemed to be in in the late 70's. In this case, it was drop targets.

The plunger shot goes to two rollovers - a very difficult shot to hit off the bat. In fact , the rollovers really don't have much to add to the game until some target banks get knocked down.

The placement of the pops gives only infrequent action to the game, and are not positioned in a manner where I feel they really enhance play. It's almost like they decided "Hey, we need two pops. Let's put them here and here".

Art is typical late 70's sci-fi, and is actually pretty nice. Better than average, but not great due to the garish red, purple, and yellow color scheme.

Really, I found the game rather dull, though do occasionally wish I hung on to it, as at least it was something different. But generally, I found the pin to be "meh". Fro drop target junkies, it's a great game. For guys like me who like multiple features (see Bally: Wizard), it's just a bit dull.

ScooterMcTavish has owned this game in the past.

Great game. 15 drop targets, lots to shoot at. The only real problem is that once the targets drop they do not reset untill the ball in play is finished. The best feature is the double bonus on the last ball, this is when you will want to earn an extra ball.

We had Thanksgiving this year at my friends parents and they own this table. I wasn't optimistic about playing this table but was pleasantly surprised and it turned into a competition for the highest score before the night was over (I won 283,350 lol).

There are 10 drop targets at the top of the playfield 5 drop targets mid playfield which are the main ways to score. Hitting all 10 of the top targets lights extraball through a lane on the right. Hitting all 5 of the midfield targets lights an extra ball through through a lane on the left. I think hitting both sets lights special and each bank increases bonus by a certain amount. Keeping the balls out of the out lanes is fairly easy and slap saves and nudges are fairly easy to pull off as well so ball times can be surprisingly long. The shot to hit the far right target from the top drop target bank was the most fun and challenging shot of the game but once you drop all 15, at least on this machine, they dont reset which leaves you with only two options which kinda sucks imo. Theres a bulls-eye target for 1k on the lower pop bumper which can result in quick drains or you can try to get it back into the top lit lanes for 5k i believe but its not really worth it. Scoring is limited to 6 digits and I was able to roll it quite often. Its kinda fun rolling the score especially when the bonus for your last ball barely rolls it over.

The artwork on the table and the back glass is strange to say the least. Solar city sounds kind of sci fi and maybe they were going for kind of a flash gordan thing? Part of me thinks its a sci fi theme but everyone is shooting bows and arrows? WTH is going on here?

Its got the classic doorbell three tone sound. At first the sound coil were turned off for some reasons and the owner turned them back on after we had played for an hour or so. I didnt really care either way but I suppose it made the game a little more enjoyable... maybe.

I guess I cant say I would recommend this table to anyone but im not an EM fan by any means. I thought it was a fun game to play at this family get together but would never want one in my collection. I think its perfect for guests that arent interested in newer pins though because its slower and easier to play and understand. Overall its not a horrible pin :)
1
There are 10 ratings (that include a comment) on this game. Currently showing results page 1 of 1.