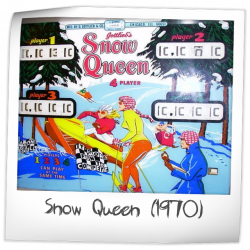 what a piece of trash, nothing to do . z couple spinners and a but load of kick outs but it is a bore fest, the art work is ugly and the theme is stupid, a real dog 4 legs and no sale PASS
6.872/10
6 years ago
GRV

Surprisingly fun game with a spinner that is satisfying to hit.

Snow Queen is a game that I was introduced to by Dean Grover. The first time I played the game... I was not impressed. Since then Dean has tweaked the flipper and the table plays as it should. I ended up finding a really nice Snow Derby (2 player version of this deck) in a trade with a fellow CO pinhead.

The Pros:
Spinners, spinners, spinners and gottlieb ringers. The theme is great and the "race" is directly tied into the game play. Hit the spinner, your light runs around the race track. The women in the back glass are wintertime amazon warriors! Where can I get a snowmobiling lady like that? She's fierce! This game was real surprise to play. I had no idea that it would play as fast as it does. The four kickers at the top of the pf make a huge difference in scoring. Set them up as a skill shot. Get that ball back in there as much as you can. Pop bumper action is HOT! Eeetty beeetty fleeeppers can be hard to aim with, but that's just me. Note to self: Must work on eeety beeety fleeeper Kung-Fu.

The Cons:
This game seems to be very picky to how it is set up. Incline, rules, it has to be right or the game becomes really low scoring or really out of control high scoring.

The Takeaway:
Rolling this table when set up correctly is really tough and a rush of pinball accomplishment. Now for my table, it has to be 3 balls. My game is set to high tap and ball can fly around the table. 5 balls was too easy. The spinner and bonus counters has to be adjusted properly otherwise the game does not play as it should.When it plays as it was designed to... it is surprisingly fast and requires your complete attention. Me likey. Thanks Dean.

Side Note: "The men are standing around dazed and confused and seem to be an afterthought. They look like complete boneheads. Shoveling snow... smoking a pipe... standing by a tree... getting blown away by a girl on a snowmobile... way to represent the team guys."

I wrote this in the Cons section earlier and someone mentioned that Art Steinholm had a predisposition towards men being buffoons and women being winners. Well... after some thought about the matter... I think that Art really knows his target audience. Namely guys like US who spend WAY too much of their lives playing pinball AND fantasizing about gorgeous women at the SAME TIME. Or maybe... it's just Art's droll sense of humor. I believe his work is in the right mindset however you look at it. Way to Mr. Steinholm. I am humbled by your wisdom of the human equation. Artwork rating updated accordingly.
1
There are 3 ratings (that include a comment) on this game. Currently showing results page 1 of 1.